February 18, 2014
People tend to think that speedskating is the track and field equivalent in the Winter Olympics. The long track is 400 meters long. It’s an oval. Racers sometimes stagger their starts to finish in the same position. The race is all based on time.

However, the better equivalent would be bobsled! The first example would be the fact that many track athletes make the transition into bobsled. All three brakemen for the women’s 2-man teams are former track athletes. Two of them - Lauryn Williams and Lolo Jones - have competed in the Summer Olympics before.

Much of the training is similar. The focus of both bobsled and track is the lower body. The  movement of the legs means that much time is spent training the legs to move quickly. There is a bit more muscle mass that gets put on in bobsled training, but not a huge amount.

Another similarity is that both sports feature Lewis Johnson interviewing athletes. That’s a definite plus in my book.

The sliding events have definitely been interesting to watch this Olympics. It may just be because my students absolutely love those events and love to nitpick them. It may also be because the United States have done pretty well in all the events - luge (1 bronze), skeleton (1 silver, 1 bronze), and bobsled (currently 1 bronze). We certainly aren’t Germany, but we’re not Jamaica, either. (Sorry, Jamaica.)

Something some people don’t realize is that the bobsled is actually run four different times. The four heat times are added up, and the final score results in the medals.

Two turns that you should look out for tomorrow are turn 2 and turn 11. Turn 2 is very sharp, and it comes up right away. Many sleds have been tapping the sides there. I noticed that turn 11 is very treacherous way back in the luge competition, where making a clean turn has been rare for many sliders.

I’m amazed that the bobsled of USA 1 has done so well, considering it wasn’t even meant for competition! Elana Meyers, the driver of USA 1, crashed the original bobsled twice, and the second time it was so bad that they needed to grab the display sled from USA House and tweak it for competition! It’s either an amazing move, or something sneaky is going on that I’d rather not discuss.

The finals of women’s 2-man bobsled is tomorrow - tune in live (it’s on at a reasonable time!), and see if the US can get two medals out of it!

Oh - and I'm not pleased that the international broadcasts are using "bobsleigh" instead of "bobsled." One of my students saw it and said, "Oh, I'm spelling 'bobsled' wrong!"

Today Bob Costas is reporting from… the Rebel base on Hoth. He might not be able to stay there for long; I hear the Empire is sending drones out to bring them out of hiding.

Speaking of the Empire attacking the Games, the AT-ATs really did some damage to the moguls athletes. (click the link)

Dear Brother-of-Mine: You think that short track is unpredictable? Did you watch snowboard cross? There was a point in one of the men’s semifinals where one snowboarder took out two others, a fourth was recovering from his own crash, and two Frenchmen were the only ones to escape unscathed! They were at the finish line for a good ten seconds, waiting for one of those guys to get up and keep going so that they could have a top three that would advance!

There were some very interesting snowpant choices by the men of Italy and Russia. I guess they called the Norwegian curlers and said, “Where do you get your pants?”

Integration! We watched bobsled today, and the kids wrote facts and opinions about the bobsled event. They had an information sheet about bobsled, so some of them wrote the width requirements of a bobsled, and others mentioned that bobsled began in the 1870s! I enjoyed their opinions, like “Bobsled is better than figure skating” and “The bobsled helmets are really cool” and “Bobsled looks dangerous. I like that.”

We also spent some time with some Olympics math. Example question: The figure skating short program is 2 minutes, 50 seconds long, and the long program is 4 minutes, 30 seconds long. What is the total amount of time? (7 minutes, 20 seconds, and they couldn’t write “6 minutes, 80 seconds” either.)

A new skiing accessory: Kathrin Zettel of Austria raced in the Giant Slalom event today, and she got one of the markers stuck to her waist. I almost thought she’d left her jacket tied around her waist by accident!

Remember the sun? I recall writing last week how beautiful the weather was up in the mountains - blue skies, cool weather, and perfect conditions. Well, now I can’t remember the last day that the mountains saw the sun! It was rain rain rain today in the mountains and even in Sochi itself. The mountains have had fog, freezing rain, and snow. Luckily, these athletes have dealt with these conditions countless times in their training and competitions.

I wonder if the Netherlands has a national championship to determine the speedskating team. That must be an incredibly competitive couple of days.

Czech blance: I got to watch the end of the Czech Republic - Slovakia hockey match, where Slovakia made it a game by scoring several goals in the third period. They pulled their goalie when they were down 4-3, but the Czechs immediately scored an empty net goal. It was interesting to see two former-countrymates (it used to be Czechoslovakia, young’uns) battle each other.

I wonder: It’s been a few days since snowboard halfpipe, and today was ski halfpipe. I wonder how many changes were made to the halfpipe between the two disciplines. If the snowboarders came back and checked out the halfpipe, what would they say now?

Scary baby head: David Wise is married with a daughter, and his wife brought a college-basketball-style giant baby head of their daughter along. I would much rather have seen the actual baby than creepy baby head!

Speaking of creepy: I SAW IT. CND makes another uncomfortable appearance. I was just casually watching the snowboard cross competition, and I look to the right of the start gate, and THERE IT WAS. Creepy Nesting Doll. It moved, guys. It’s sentient. We should all be very, very afraid. I’m talking Stay-Puft Marshmallow Man afraid. Who you gonna call?

Good golly someone help that man! Lyman Currier landed wrong in ski halfpipe, and seemed to lay there screaming in pain for a good ten seconds. It was squirm-inducing, and all I could think about was, “Where is some help?” Eventually he skied down himself, but man, it took a while!

It was a Norway-Germany battle today, with two Norwegians and three Germans battling for the top three spots in the end. I was surprised to see such tight clusters this time around - but the announcers mentioned that this course wasn’t as difficult as Vancouver’s course; that meant no one had a chance to break away in a difficult spot in the course. Still fun to watch - the course was so tight in the end that it was impossible to get all five of them through cleanly - two Germans got tangled up, and one of them completely wiped out!

What the heck? As Tom Hammond, Sandra Bezic, and Scott Hamilton previewed women’s figure skating, something very loud and obnoxious was taking place behind them in the arena. I am really curious to find out what that was. Will someone please find out? If I find out I’ll make sure to let you know!

Lots going on tomorrow. I did a great job staying in the dark for many events today; hopefully I can do it tomorrow too! 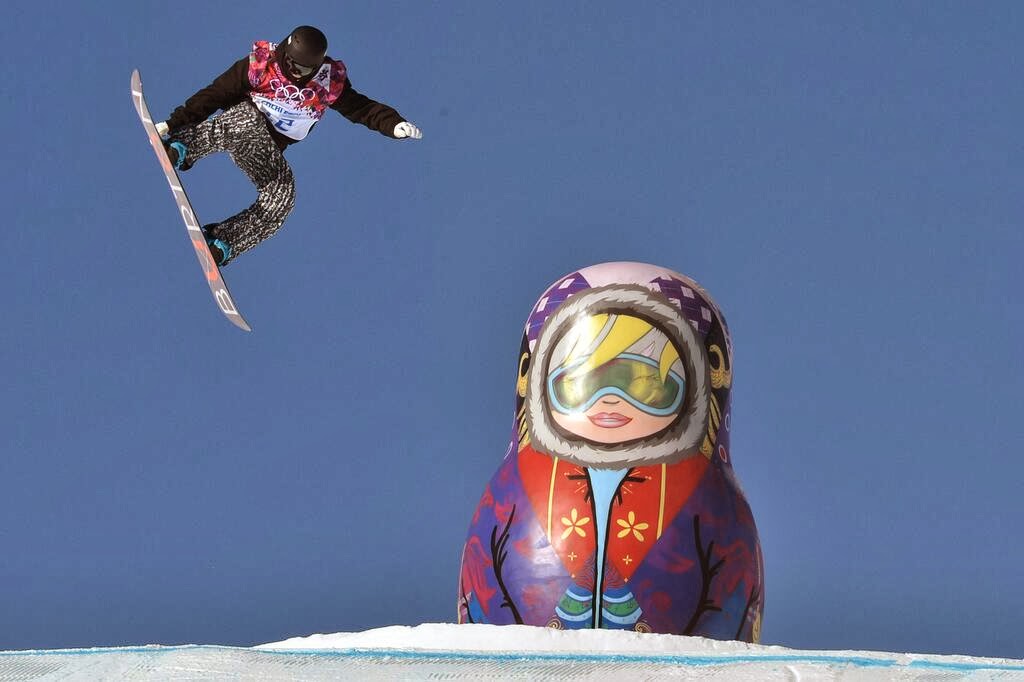