A Tale of Four Cities

July 28, 2014
This spring and summer I got a chance to do something I'd never done before: visit more than two Major League Baseball stadiums. I've been to multiple games at the same stadium, but this was a more ambitious venture for me. Someday when I'm a millionaire, I'm going to do every single MLB park in one single summer. But for now, this was a good start. 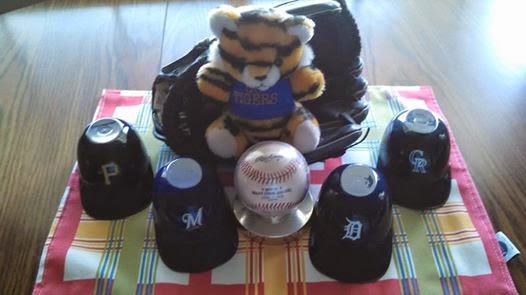 It used to be that there was no contest for the best skyline in baseball. Comerica Park is so close to downtown Detroit that the Renaissance Center and other famous Detroit buildings line the outfield view. Better yet, many of those buildings light up at night.

However, the view from PNC Park is great, and most of the credit can be given to those awesome bridges they have. 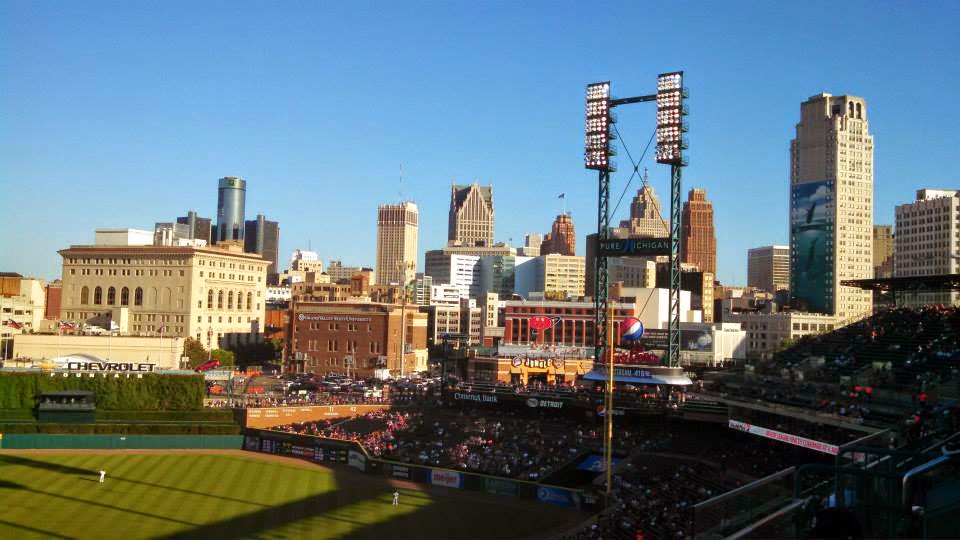 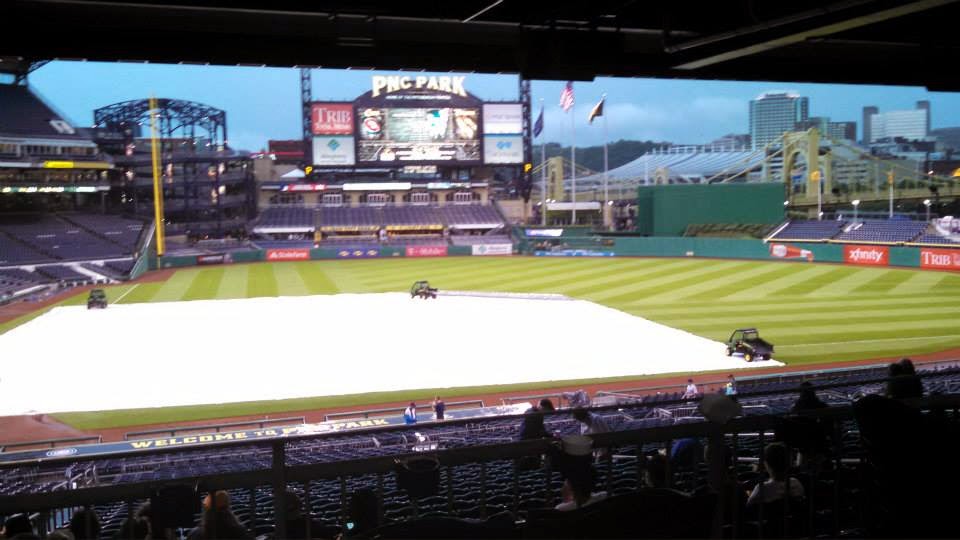 Pittsburgh (sorry it's not the best shot)

Without a doubt, the trek from parking to PNC Park is the best one out there. The reason behind that is they close the Roberto Clemente Bridge (which takes you right next to the park) to cars and open it up to strictly pedestrian traffic. I used to only get to go on the road for Memorial Day after the parade finished up, but this was special.

The weird thing was that some people still used the pedestrian walkways on the sides. Why? The middle is wide open!

There can be ways to make this walk interesting, but since the whole ballpark is surrounded by parking lots, you're pretty much walking through cars the whole time.

Because the other three parks are found right in the city, they offer more restaurants in the area than actual places to tailgate. However, the parking lots of Miller Park are second to none when it comes to a good tailgate (or one hundred!). People arrive at Miller Park two hours before the game (sometimes earlier) to get a good spot and set up their smorgasboard of food, games, chairs, and beer. Forgot something? Just go to the next tailgate and ask them - they're usually happy to lend it out! 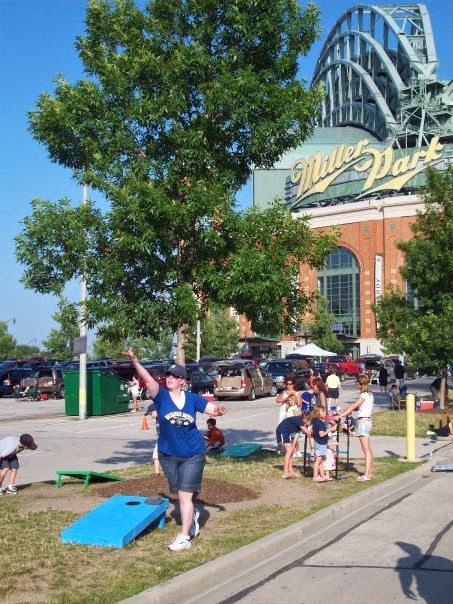 This is pretty unfair, considering I didn't buy beer at any of the other places and my brother ended up buying me the beer I did have in Miller Park, but Spotted Cow is the best beer in all the land, and that is what I had. The end.

Best Place to Get a Foul Ball: PNC Park

Also a bit unfair, because this was the only place I got a game-used ball. But whatever. I got it, so there! 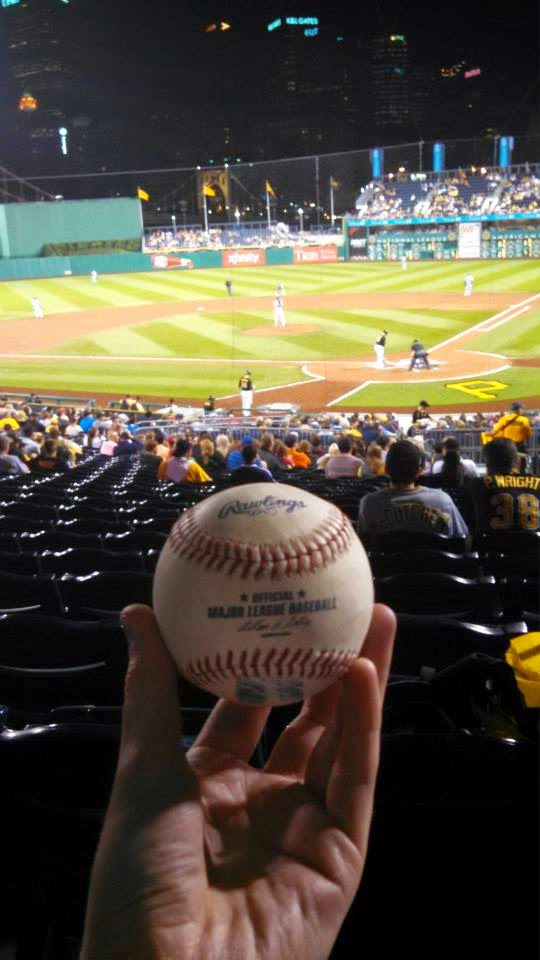 I had eaten dinner already before I made it to the park, but I saw a BBQ stand that had brisquet parfait, and I was sold. They had many other delicious barbeque from which to choose, but alas - I was not hungry! I have had other tasty treats at Miller Park on other occasions.

Comerica Park opened in 2000 with a pretty nice scoreboard flanked by two tigers whose eyes glow every so often - either for a rally or a 9th inning cheer. But when they completely overhauled it back in 2012, they put the other MLB scoreboards to shame. Not only is the thing huge, but it is crystal clear. 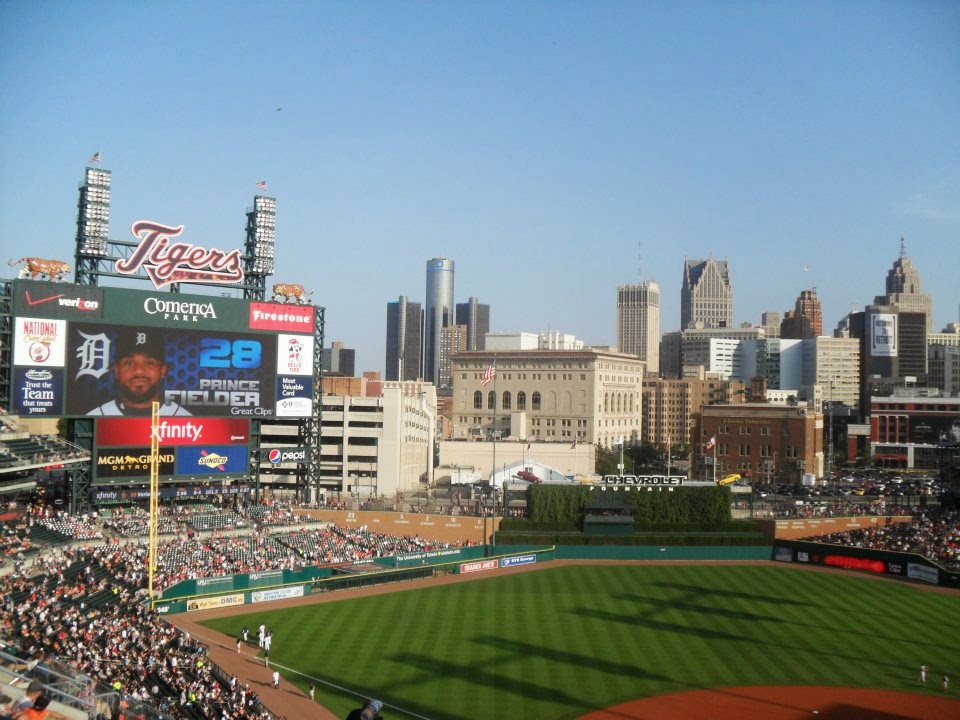 Even though I went to Coors Field with my students, nothing beats the fact that I was able to attend three baseball games with every member of my family! I went to Comerica Park with my father, PNC Park with my sister, and Miller Park with my mother and two brothers. I mean, how awesome is that?! Clearly I come from a family that gets baseball.

Unfortunately, this was the one night of my trip where nasty weather came through Pittsburgh. My sister and I had to hide out in a restaurant for half an hour, and then endure a rain delay at the stadium for 2 hours. As a result, we only got to see half the game before heading back home because it was so late.

Pittsburgh put up all its runs while we watched, and it made the scant crowd that stuck around very peppy. This was also the only game I saw where the home team won.

The game at Coors Field was home run city...for the Giants. The Jays-Tigers game was scoreless and quick...until the 9th inning when the Blue Jays put up a bunch of runs. The Brewers were leading...until their closer gave up three runs in the 9th inning.

This was the game where I got Lenny, our classroom mascot. We now use him for games in the classroom; for example, if they answer the question correctly, they can get a bonus point by throwing Lenny into a (clean) trash can! 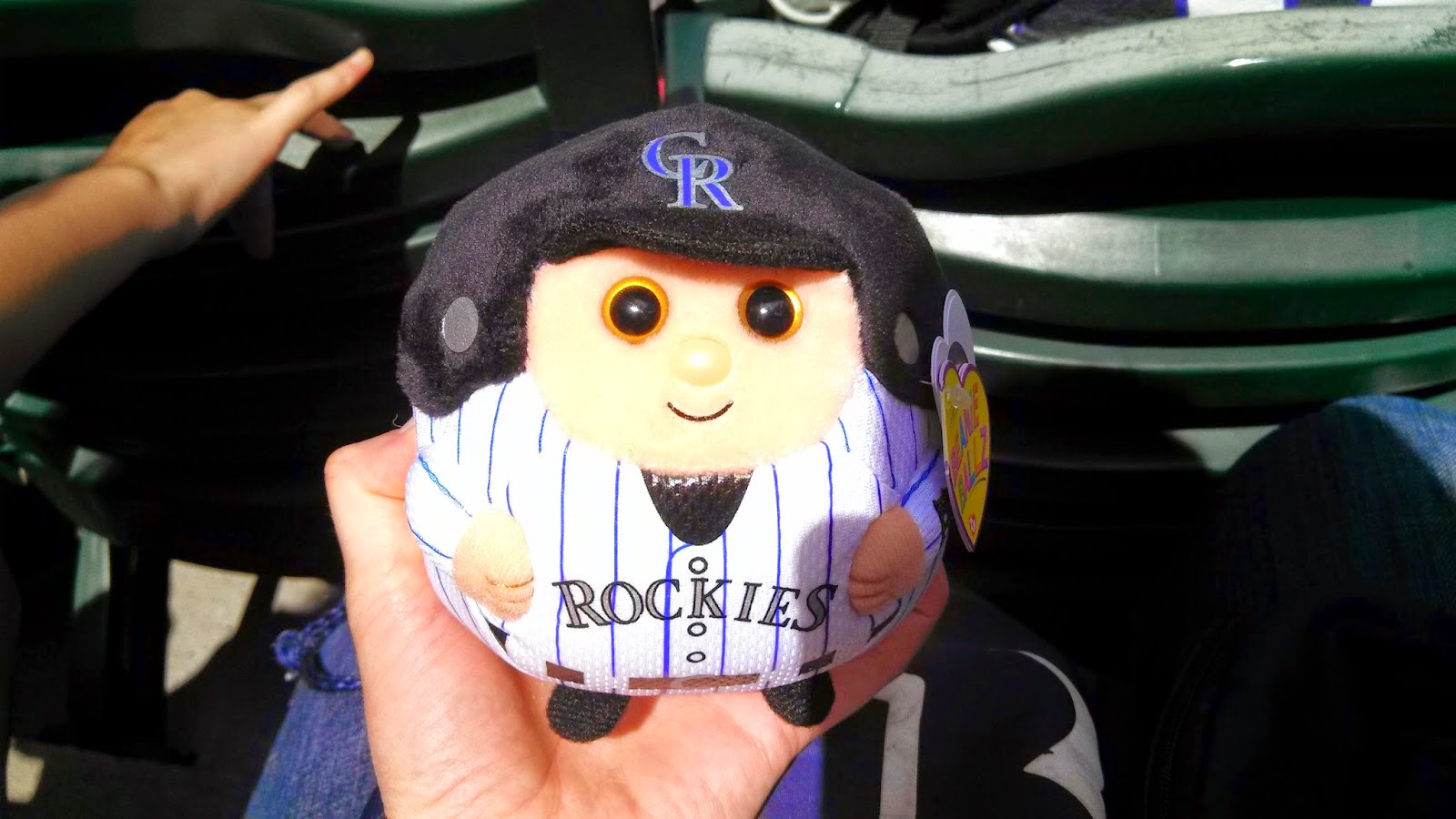 Miller Park has a Bob Uecker statue (in two places, no less!), PNC Park has a Roberto Clemente statue, and Coors Field has a statue to honor Branch Rickey, but Comerica Park will always win this award because of their outfield statues.

Comerica Park has six statues of great Tigers players, and these are some of my favorite statues of all time thanks to the way the sculptor showed the players in action. The players all have their numbers retired: Ty Cobb, Charlie Gehringer, Hank Greenberg, Willie Horton, Al Kaline (my favorite Tiger ever), and Hal Newhouser.

Oh - and don't forget the statue to the late, great Ernie Harwell that greets you when you first get through the turnstiles. My dad always stops and tips his hat to the great announcer. 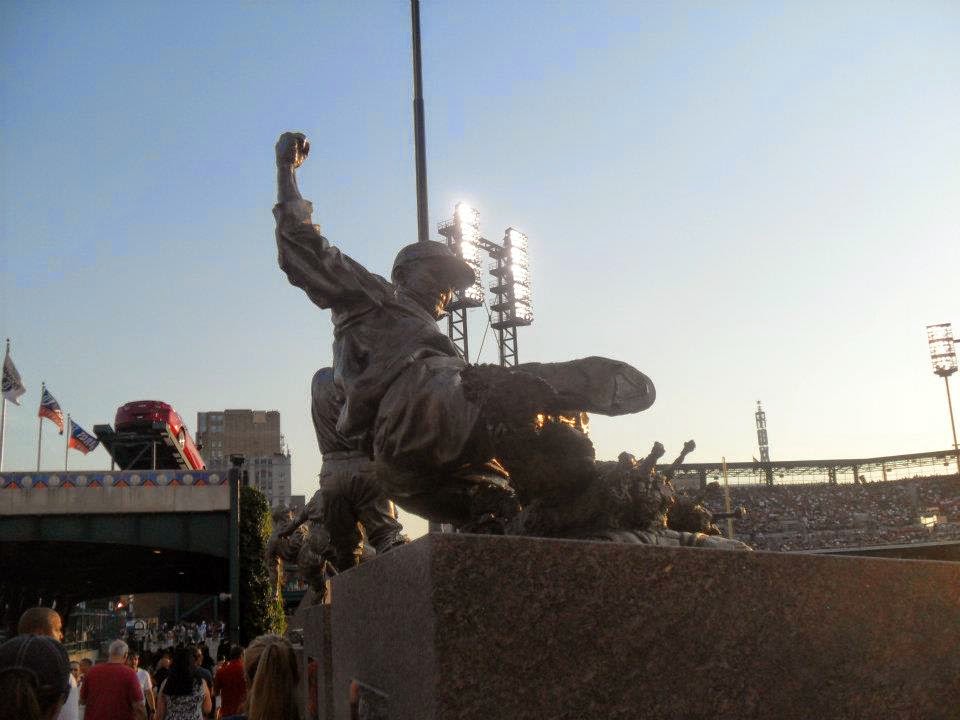 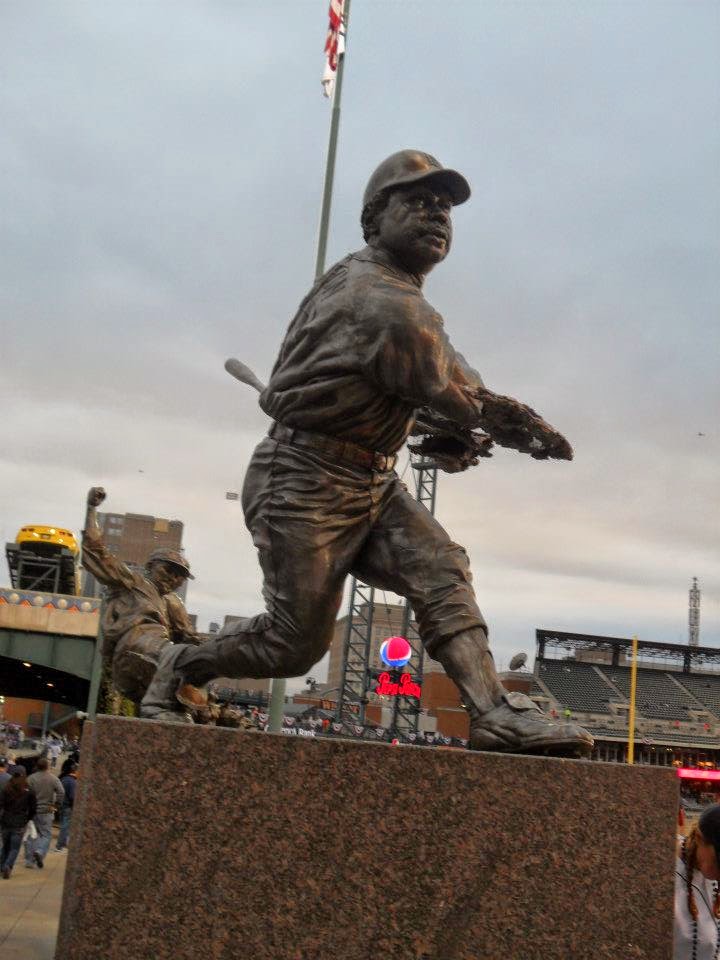 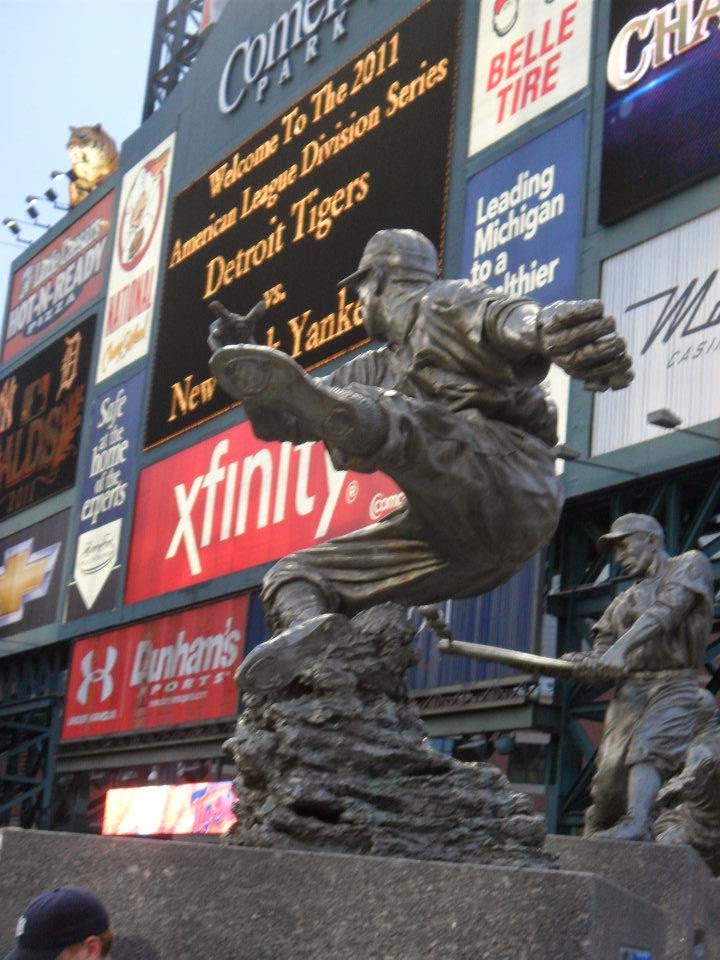 Ten bucks. Yes - ten bucks. Everywhere else was at least $16 - but for ten bucks, we got a lighted lot right down the street from the stadium and super easy access back to the highway. Miller Park parking was expensive, Coors Field parking was congested, and PNC Park parking was actually downtown (forget the bridge experience for a minute here).

Best Experience: All of them

Nothing beats a night at the ballpark. Hockey games are rapid-paced, football games are power personified, and basketball games are a showcase in finesse, but baseball games take the cake for me. I love sitting down at any stadium and taking in the action of the teams on the field. Forget the frozen lemonade, the vendors, and the pretty pictures; all I want in front of me is some baseball!