Not So Scary, So Much Candy!

October 28, 2014
One of the things on my "must-do" list at Disney included finally doing a hard-ticket event in the Magic Kingdom. I'd heard that the Halloween Party was a lot more fun than the Christmas Party, so on my fall trip I was able to purchase a ticket.

The premise is this: everyone who attends is encouraged to wear costumes (but not TOO accurate for some costumes like Snow White or Belle) and can trick-or-treat in various areas around the park. Many attractions are still open, but there are special shows, dance parties, and fireworks that are the highlights of the evening.

I planned on arriving in the Magic Kingdom as the Ninth Doctor from Doctor Who, but I didn't want to be in the outfit all day, so I stored it in my car. People with party tickets can arrive at the park at 4pm (though the party doesn't officially start till 7), and I wanted to make the most out of my time, since this would be my only time in the Magic Kingdom all vacation. 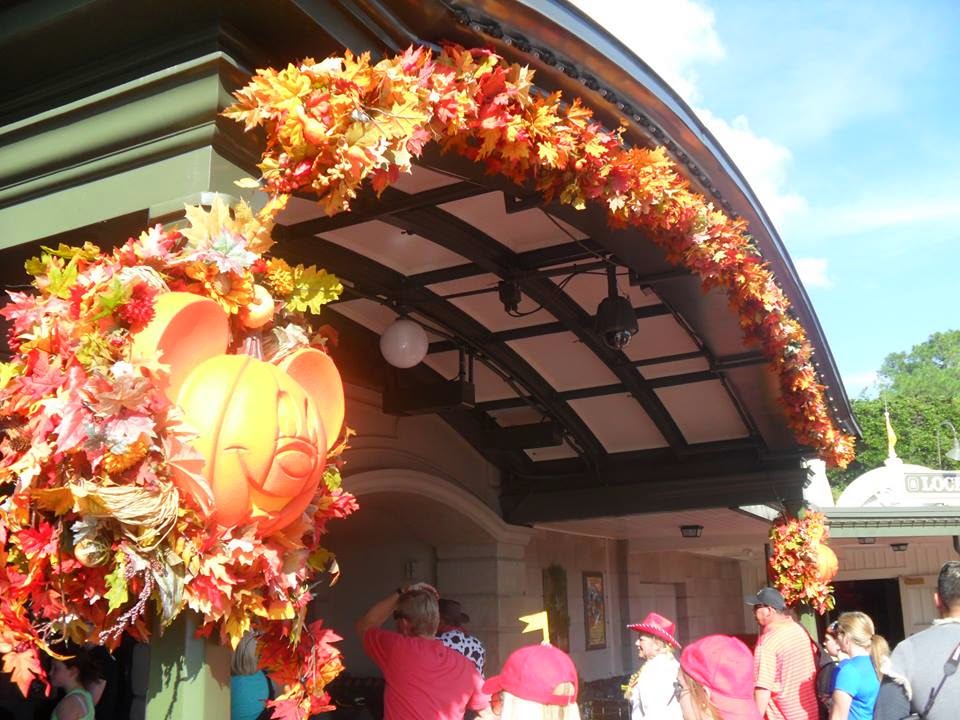 I was in Epcot, and I took the monorail back to the Ticket and Transportation Center (TTC - where you have to park when you go to the Magic Kingdom). I walked to my car - I had gotten there so early I was in the second row - and got my costume. I went to a restroom in the TTC and changed, then went back to my car and dropped off the stuff I wouldn't need for the party. Then I grabbed a monorail to the Magic Kingdom. I was surprised at how efficient I was, and I was in the park by 4:30. 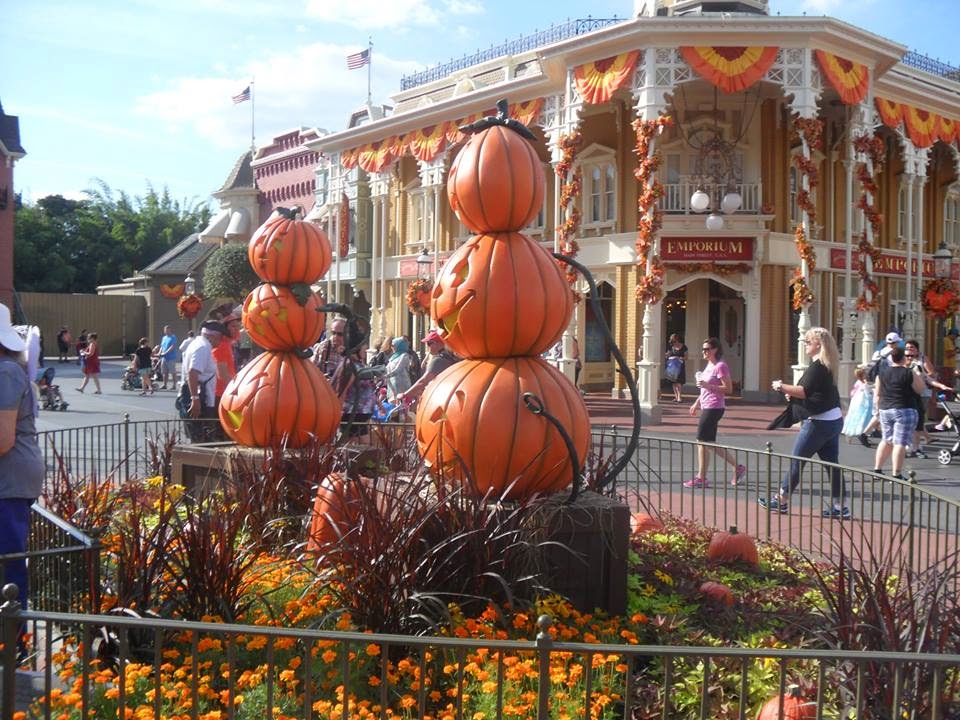 I spent most of the time before 7 in Fantasyland, which is completely different from what you might remember. The original area had buildings coming out from behind the castle, with the carrousel and Dumbo in the center. Now Dumbo is completely in a different part of the park, and there's a castle wall that separates the old area from the forest in Fantasyland. In the forest are several new attractions and locations. 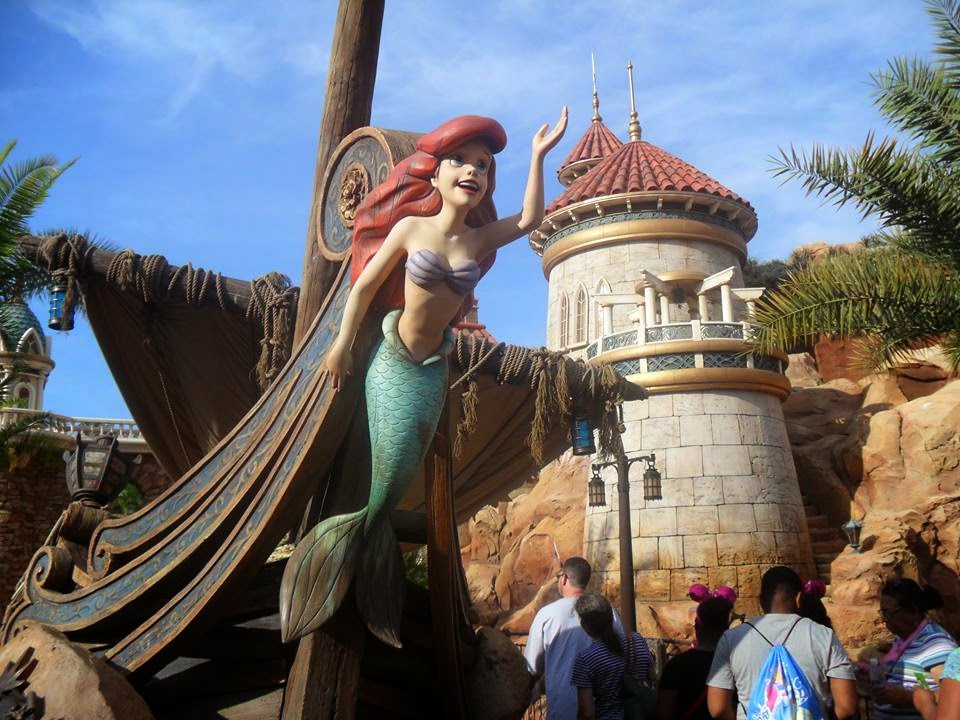 I had seen construction walls in 2012, so I was elated to see the finished product. I held off riding the Seven Dwarfs Mine Train since the wait was really long, but I did ride the Journey of the Little Mermaid dark ride (fantastic!) and watched the very cute Enchanted Tales with Belle show. Whoever put that show together has an education background, since there's lots of movement and use of props and all the kids are involved somehow.

The Be Our Guest restaurant is the hot ticket right now, and people get reservations months in advance. But on a whim I decided to hop over to the kiosk and see if I could score a day-of reservation. And to my shock and surprise, they did have an opening! I could fit in at 7:40 - did I want it? YES.

Before my reservation I did one of my favorite rides: the Tomorrowland Transit Authority People Mover. I ended up being in Tomorrowland for the start of the party, and there was a DJ spinning tunes in the courtyard with the cast of Monsters, Inc. I checked out a trick-or-treat location, and they make sure to give you handfuls of candy at a time. And it's good candy, too!

I made sure to take lots of pictures of great costumes. There were some clever ones, like the Peter Pan and Show White families. 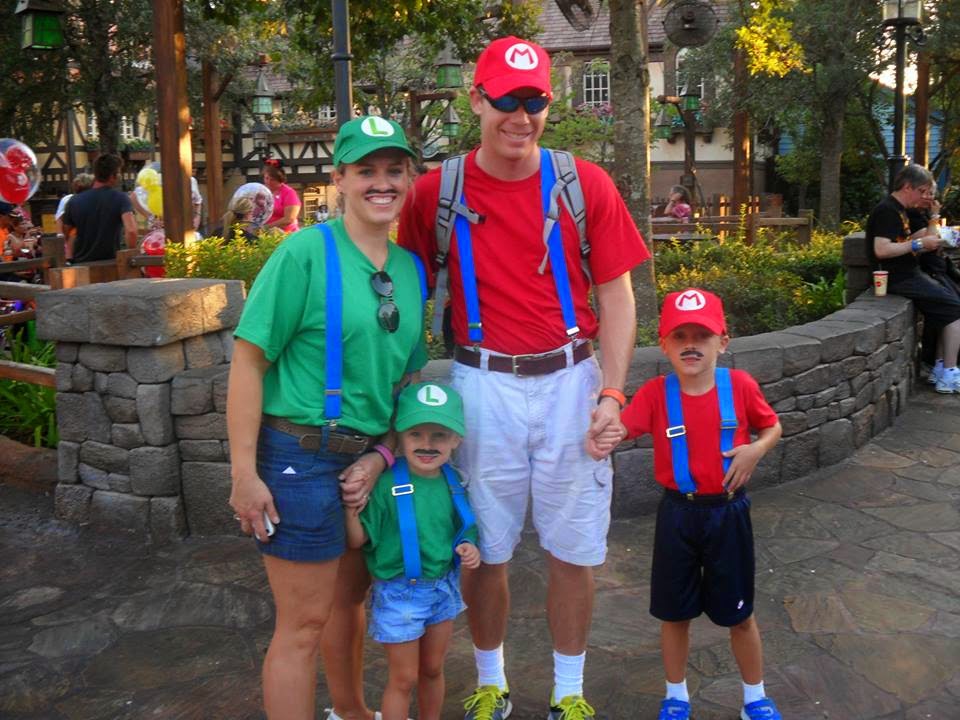 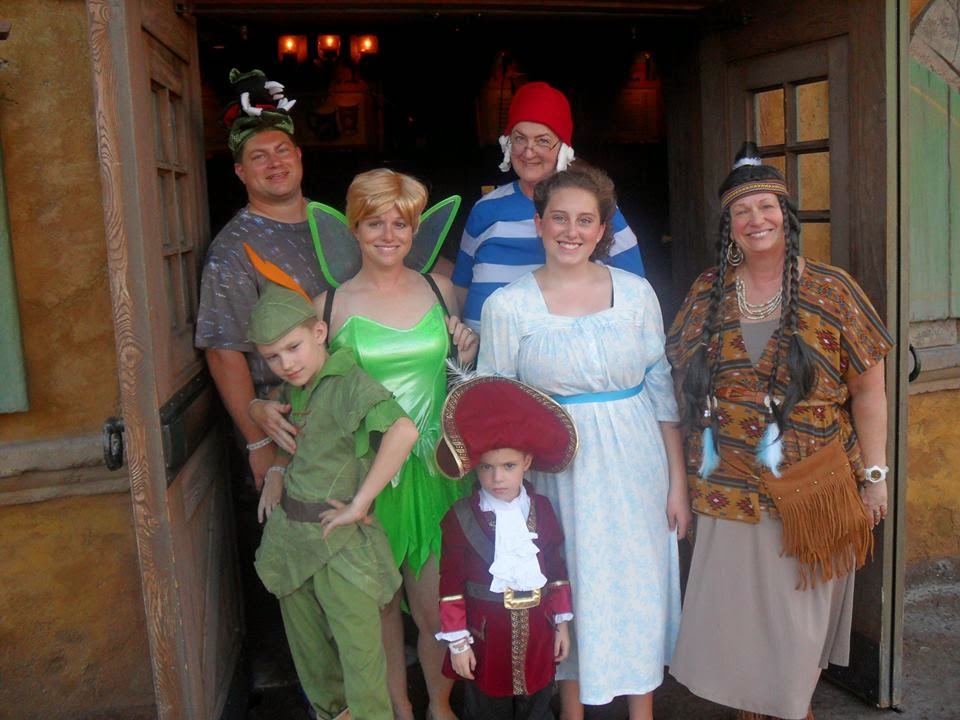 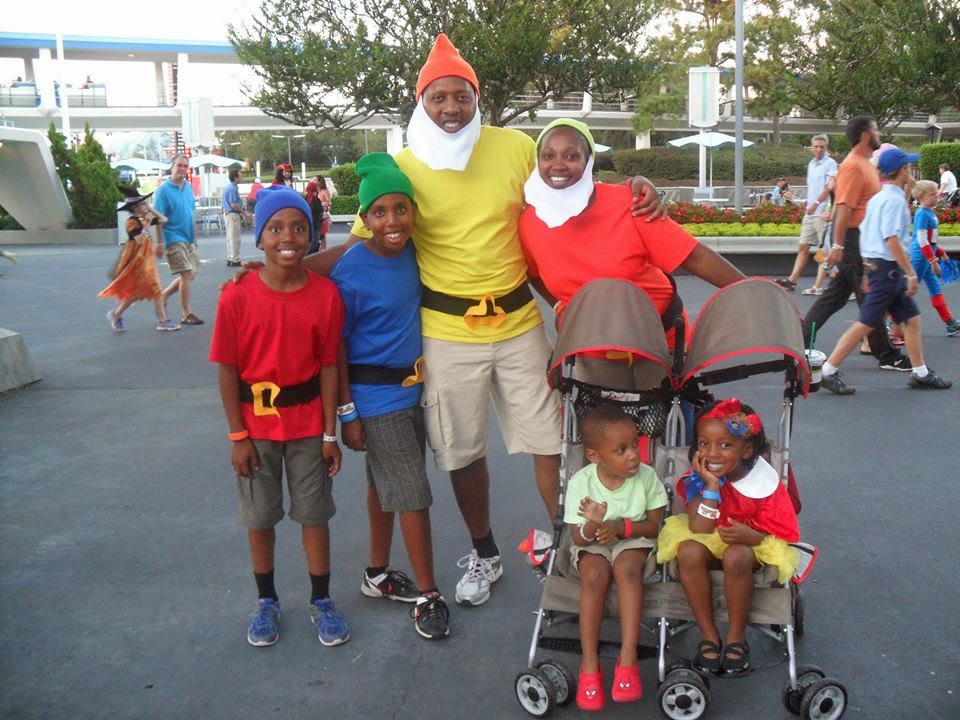 My dinner at Be Our Guest wasn't party-related, but still amazing. I dined in the ballroom where Belle and the Beast dance, and it looks exactly like it, enchanted windows and cherub ceiling and everything! They also have a West Wing area which is amazing, too. I ate ratatouille because of the movie - yes, it was very tasty! 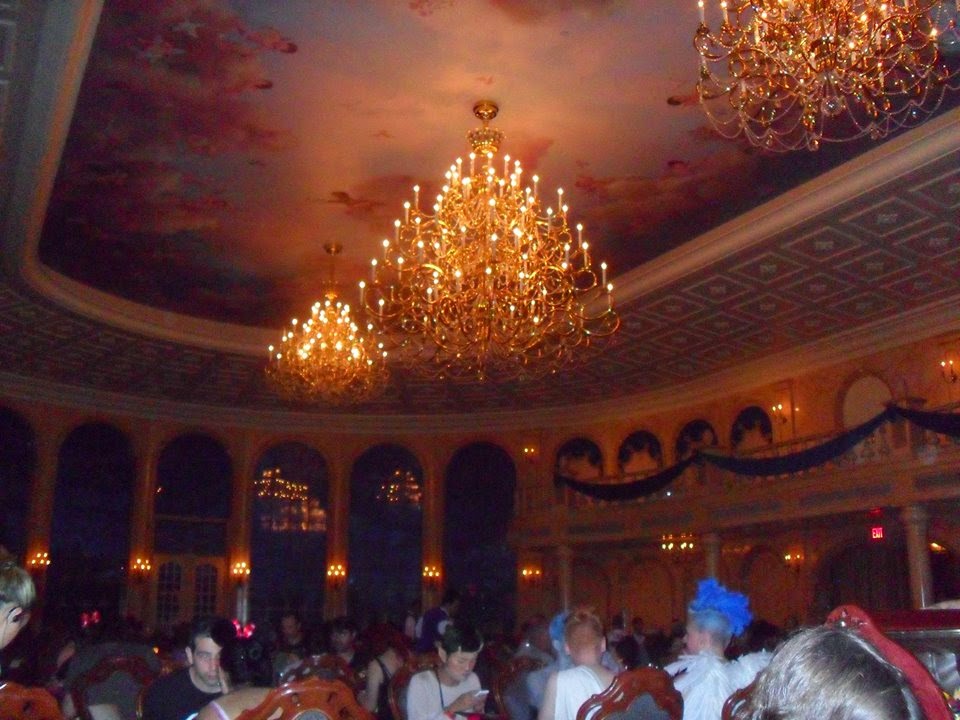 You get a chance to take your picture with the Beast (who the servers call "the Master"), and when he came out from a break there was a big announcement and everyone applauded when he appeared. It was really cool.

After my stellar meal, I roamed the Magic Kingdom. I caught a show in front of the castle called the Villains Mix and Mingle, which features Dr. Facilier and a bunch of other Disney villains. I got stuck in Pirates of the Caribbean for 15 minutes (which always happens to me - this is not the first time!). I went in even more trick-or-treat lines.

The Happy HalloWishes fireworks show was some of the best fireworks I've seen. At the end they have fireworks exploding not just behind the castle, but also around the hub and Main Street USA. That made a good impression on me.

And then there was the parade! It's called the Boo to You Halloween Parade, and I watched it from Frontierland (where it started). I loved the first sets of "scenes:" the very first one was with Mickey and friends, and the second was pirates-themed, with Peter Pan and Jack Sparrow featured on separate floats.

My favorite section by far was the Haunted Mansion. First, the caretaker walks by with his dog. Then gravediggers dance down the way. They have shovels, and when they scrape the shovels against the pavement sparks fly! After a small float with the famous gravestones, the ghostly ballroom dancers go past. The last part of the scene is a float with the Hitchhiking Ghosts. They were my favorite part of the whole parade because they acted like Audio Animatronics, with stiff movements making them even creepier than normal.

As a matter of fact, I was so impressed by the first half (and not at all impressed by the second half, which featured cowboys and a barnyard) that I raced through Adventureland and caught the beginning of the show again on Main Street USA! It was so worth it. And instead of pictures, I want to show you the entire parade!


Following the fireworks and parade I had an hour left, so I knew I needed to get in line for the Mine Train. I waited for about 30 minutes, and the attraction is fantastic! I wish I could have ridden it one more time.

As if on cue, my feet started screaming at midnight to get out of my boots, so I followed the crowds out of the Magic Kingdom, immediately got on a ferryboat, and got to my car and back to the hotel in no time at all. I found the night to be extra magical, and I'm glad that I gave Mickey's Not-So-Scary Halloween Party a shot! 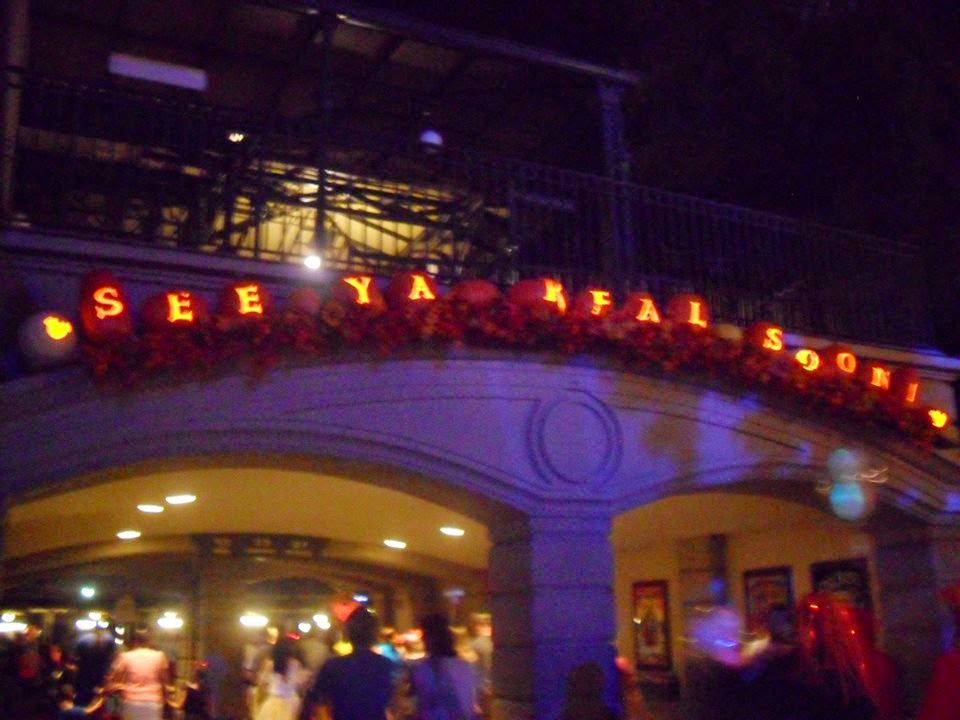