A Fine Day to Ski

December 16, 2014
Last Saturday I decided to take a trip into the mountains and go skiing in Breckenridge - a ski location that I am familiar with thanks to my trips there last season. My goal for this one-day adventure was to see if I remembered anything from my lessons eight months ago, and also find out if I could go on my own. 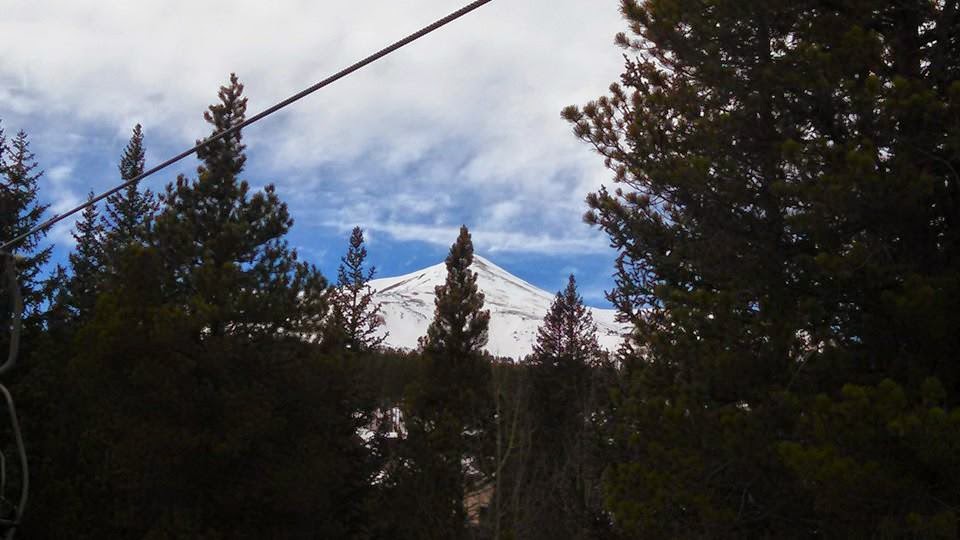 My cousins weren't planning on coming to Breckenridge till the following weekend, and I had a free morning with good weather. I had spent the week researching good places to park, the best slopes to try, and how long it would take to get there. Thanks to my advanced planning, my day went off without a hitch!

Breckenridge's parking lots are $12 on the weekends, but they have a free satellite lot outside of town and free shuttle service to the free gondola that will take you up to the base of Peak 8. There's a lot of "free" in that sentence, so I had to take advantage of that.

I woke up at 5 a.m. and was on the road by 5:45. There hadn't been much precipitation in Colorado for a few weeks, so the roads were dry and traffic was minimal. I always find it creepy to drive through the mountains at night, but the sky lightened quickly as I took I-70 west.

I was concerned that maybe the free lot was small and would fill up early, but I didn't need to worry. The lot was huge, and I was the fourth car there. I had planned on getting to town about 7:30. The shuttles and gondola started at 8, and the ski lifts opened at 9. Because I got there early, I had plenty of time to get bundled up, make sure I had everything I needed (skis, poles, sunscreen, chocolate, phone, keys, etc.) before a few other cars showed up. The first bus that pulled up had me in it!

The group of us were dropped off right at the gondola entrance, and while there was a really long line to purchase lift tickets, I already had that taken care of. Thanks to my summertime visit with my parents, I knew exactly where the gondola would drop me off.

I took the gondola up with a nice couple from Lakewood, but had also formerly been in the Midwest. They planned on catching the Dew Tour, a contest for snowboard and freeski athletes, which I planned to do, as well. I had done my research on that, too, and knew the first competition started at 9.

The base of Peak 8 has a lodge and several ski lifts. I got to the area around 8:50, and there were a few people milling around. Only Rip's Ride was allowing people to get on, since that was the one that would take people to the competitions. I decided that I would watch the women's snowboard superpipe final before I did the slopes.

Rip's Ride lets spectators off near the end of the superpipe, but then we had to climb up to get to the lower portion. I left my skis and took my poles, and I'm glad I had those to help me get up! Those ski boots are really heavy.

The area was not crowded at all, so I placed myself right behind the athlete's guest section and had an unobstructed view, since there weren't any people in that guest section! It was pretty interesting watching the Dew Tour cameras that were livestreaming the competition and the NBC cameras that were recording it to show later.

I didn't have to wait long to see my first familiar face. Hannah Teter won the gold medal in the 2006 Olympics and went down first. Unfortunately, neither run that she did resulted in much, but it was awesome to see her up close.

Chloe Kim isn't someone that has won an Olympic medal...yet. She's only 14 years old! But she was stellar and deserved her second place finish. It was clear that NBC knows she's the next "big thing" because of how much time she had to spend in front of the camera and how many interviews she gave after the competition! 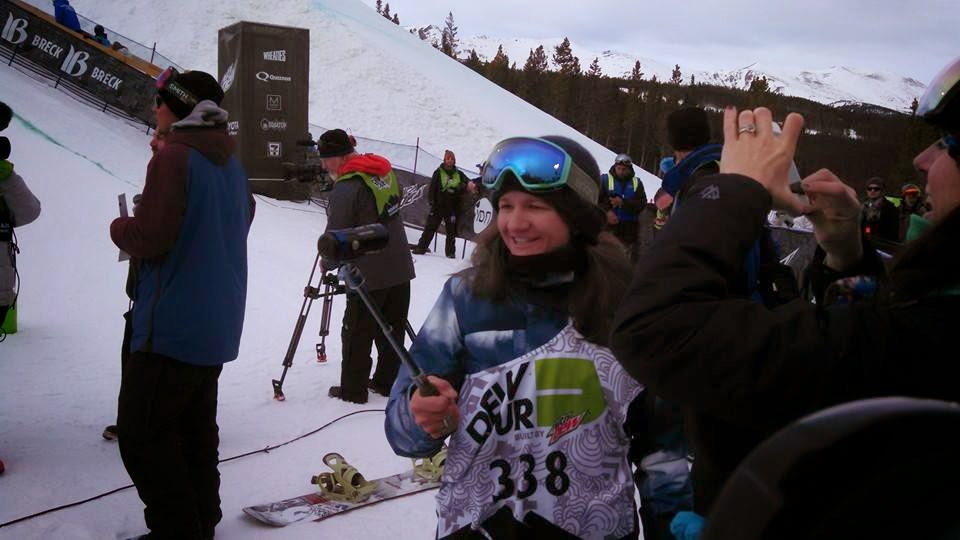 My excitement was for someone that I've known from the Olympics since 2002 - Kelly Clark. She won the gold medal back in Salt Lake City and is still dominating. She won the competition and did it convincingly, laying down a 1080 and not wiping out.

When NBC reaired the competition in the afternoon, my parents watched and caught me on television behind Chloe Kim. It was neat having them see me all the way back in Michigan! 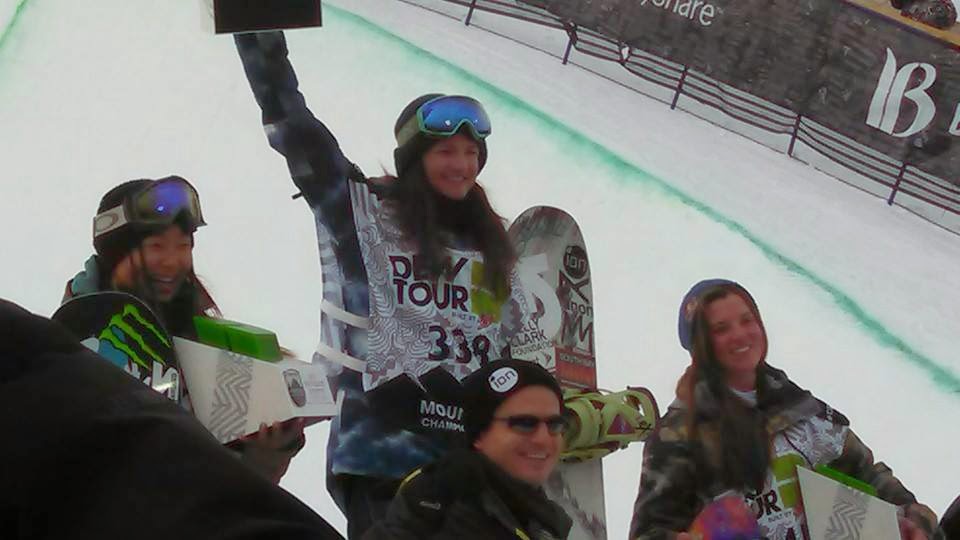 The men's competition was about 1 1/2 hours after the women's competition, and I saw them warm up, but I decided to hit the slopes instead of waiting. While the women's group had athletes that I have been familiar with for 12 years, the men's group was full of athletes that I'd only known for the past year. I didn't have the excitement to see those guys than I did the girls.

I retrieved my skis and put my skills to the test on a pretty small hill called Dyersville. And whadya know? I still felt good! What a relief. Since I was on my own, there was always that fear that I'd fall over and not be able to get up. But when I did fall (twice total - I'll admit it) I was able to get myself up!

I did another run down Dyersville, and then decided to try to get over to Peak 9, with which I am more familiar with. So I took the brand-new 6-person Colorado SuperChair, which I saw being constructed over the summer. It is fast! I was impressed with the speed and how fast it got me up Peak 8.

There are lots of signs on the slopes, and directions pointing skiers all over the place, including Peak 9. I followed those directions down Springmeier, Four O'Clock, Crosscut, and Sawmill, but I made a mistake when I saw directions for Snowflake. I remembered Snowflake and it sounded familiar, so I decided to turn in there. My mistake. It took me down to the Snowflake chair and all the way back up to the top of Peak 8! If I'd stayed on Sawmill I would have made it to Peak 9. Oh well. I went down Springmeier again and stopped at the lodge for some water - I needed to stay hydrated!

The base of Peak 8 was super crowded since it was lunchtime, and I knew I wanted to get out of there since the lift queues were going to be very crowded from now on. But I'd had so much fun that I decided to fit in one more run. I decided to do Springmeier one more time. At times Springmeier is a green (easy) hill, but other times it's a blue (medium). I didn't feel horrible going down those blue areas, which made me pretty happy. 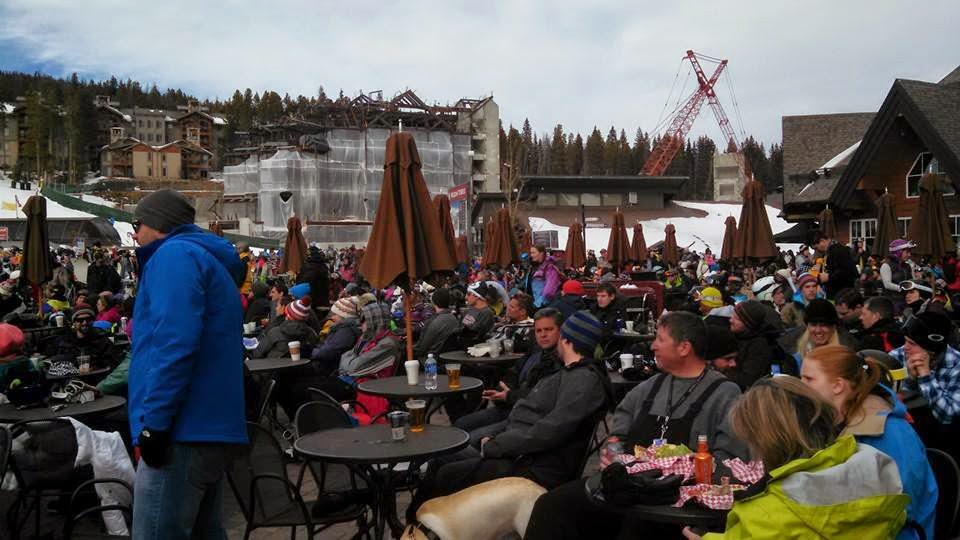 After one final run, I called it a day. It was incredibly easy to get back to the gondola, hop on a shuttle, and get back to my car. Like I wrote earlier, my advanced planning helped me have the most successful ski trip I could have had!

Even better, I now have confidence going skiing without my family along. While they do their black runs, I can feel good doing something that feels more comfortable to me. Although I might not have the best posture going down a hill, I enjoy every minute of it!