I hate running. The end.

No, that's not the story. But it's kind of true. Ever since I had to run laps around our small gym in grades school for basketball season, I have hated running. I didn't join the track team in high school my freshman year because I heard the coaches made everyone run to the track - about 1 1/2 miles - and I wasn't about to do that to myself. I didn't touch a treadmill in college, even though I was in the fitness center at least 5 days a week.

Somehow after I started my first full-time job in Wisconsin, I began thinking I wanted to give running a try. Three of my friends were doing 5Ks and seemed to have a good time. I was already doing regular walks around my quiet neighborhood to get some exercise - why not pick up the pace a little bit?

And then I did my first mile.

Well, not literally. But it sure felt like it. By the time I made it back to my apartment I was wheezing with a giant stitch in my side. I basically crawled up the stairs, sat on my couch, and vowed never to do that again.

But wouldn't you know it, I tried it again the next day! Same place, same distance. And although I still was wheezing by the end, I felt a little better. And there was hope.

Hope is my motivation. For some people, they need an app or a book or a running partner telling them "Get your shoes on and go running already!" All I needed at that time was the thought that I was improving. And every run got a little better. Because of that, I kept running.

I ran my first 5K in December of 2010 in cold Madison, Wisconsin - a Jingle Bell run to support arthritis. I was not the most well-equipped runner by far, but I still did the run and finished with a time of 37 minutes and 54 seconds. For 3-ish miles, I was very pleased.

My second run was actually a Firecracker 4-miler on July 4 of 2011, fittingly. I stayed with my friend nearby and ran it with her. I started slow and picked up the pace. I was thrilled to finish with a faster pace than the run in December and an overall time of 49 minutes, 25 seconds.

Then, I stopped running. I was dealing with things personally and just stopped. Then I got called to teach at a school in Colorado, and then I was worried about the altitude and how it would affect my running, and then school started, and eventually running was out of my mind.

But you know how some things are. Eventually they'll push you back in. And that hope that I had - the hope that each of my race runs got better, so I should keep it up - allowed me to be inspired to run again.

This time, though, I was going to be a lot more prepared. Because the race I am training for is a half marathon in Disneyland. If you're keeping track, that's three times as long as my previous race. (But it's in Disneyland!) And I might be throwing a 10K on top of that depending on how things go.

To prepare, I am using birthday gift cards to gather solid training gear. I'm not going to put on an old sports bra, any old pair of socks and shorts, and my Nikes and run out the door. In the past three years, I've learned all about wicking sweat away from your body, and that you can buy all your clothes with wicking power!

For example, I have three pairs of running socks that help wick away sweat. The black pair is SmartWool that I got from the Jingle Bell 5K, the white pair are some Nike DriFit socks I got by mistake when I was trying to buy hiking socks, and the blue pair are new Balegas that were recommended to me. 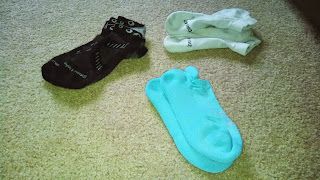 If I can keep my feet in good shape, then a major step to my training is accomplished. To add on to the sock power I now possess, I went all-in and shopped at a specialty shoe store around here called Boulder Running Company. They took sensors of my feet, took video of my feet while I ran on a treadmill, and determined that I have high arches (you can't even see them on the sensors) and my feet roll out when I run. When all that was said and done, they handed me a pair of Brooks shoes that cushioned my feet and corrected my running. Oh, and they felt comfortable, too.

I won't tell you how much I spent on them. It's too depressing. And they say running shoes only last for 500 miles! (But I want to walk 500 more!) 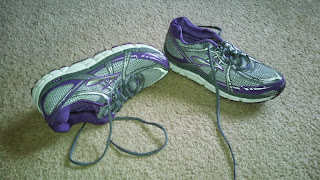 Also working with my sweat-wicking feet were sweat-wicking shirts and capris. I also have amazing headbands called BondiBands, which are snug around your head but also keep the sweat out of your face. I swear by those things. 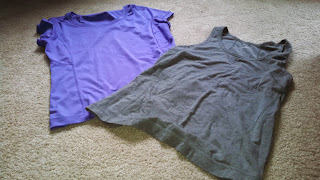 I still wanted to be able to carry around my phone, though, as well as keys. Right now, when I go for my walks I pack that stuff in a tote and have my iPod on my armband. I wanted to consolidate a little bit. Right now I'm considering an iPhone, which will be my phone, but also an easy way to get to my playlists. I can keep that on a FlipBelt or another waist-wearing belt. These are two major items that I haven't purchased yet, and probably won't purchase for another couple of weeks.

In my first bout of running, I didn't have a smartphone and apps. This time I am hoping to bring those things into play to help me train. While my hope will get me places, apps and web training will get me to run smarter.

Now for some things that concern me...

I've heard a couple of places to follow these steps: "Step 1: start running. Step 2:...there is no Step 2!" As much as I'd like to believe that, there are so many things on the Internet that tell me otherwise.

Whenever I look at running websites, they are so quick to point out things like nutrition or cross-training or other things that just seem like they take a lot of time and energy. I can understand hydrating, but how much does my meal the day before affect my 2-mile run/walk the next day? It seems like these bloggers out there are so picky that whenever I have thought about running before, those kinds of things drive me away.

I now have more resolve (and Pinterest items) that allow me to pick and choose the ways that I train. I'm not going to freak out if I have too many calories or forget my gel. I'm just going to do my run.

So once school ends for another year, I'm going to train. It's going to be slow and short at first, but my hope (which keeps me going) is that I'll get better. I'll run a 7K over Labor Day weekend and then set my sights out for MLK weekend.

And you know I'll be giving it a shot, because I'm posting this. I wouldn't write a whole article about it and not try. I will write more as my training progresses!