June 09, 2015
As the running progresses into week 3, I can say it's going pretty well. On Saturday I was able to run/walk four miles in the 50 minute timed run that was scheduled for me.

I say it was "scheduled" because I am following a training program on an app called Runkeeper. For the most part, it tracks your running on your phone and gives you insight as to how you're doing.

I like it because it's free and adjusts nicely to my schedule. But I can't end the post on that, can I? So here are a few things you could expect from Runkeeper.

First of all, you can register yourself and then keep track of your progress both online and on the phone app. There are a few things you are able to do online that you can't do on the app, like adjust your training dates, but it's not much. 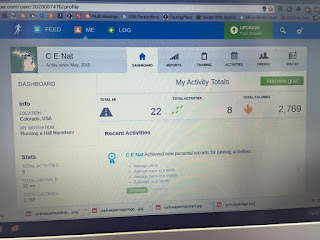 They make it so you can share your progress with friends and post things on social media, but I'm not big into that. You can also comment on your workout and save routes that you can look at later.

Runkeeper also isn't just for runs! I have logged in two eliptical/strength training sessions and one rather long walk, which I have done on my rest days. (They say it's good to be well rounded in training.) 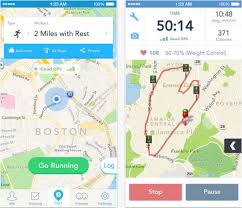 I have signed up for an easy program: the Beginner to 5K program, which runs for eight weeks. Every other day they schedule you for a run of some sort, saving longer runs for the weekends (like that 50 minute run I did last weekend). My first few "runs" were 1.5 miles long, even though I stretched them out to over 2 miles based on my route. 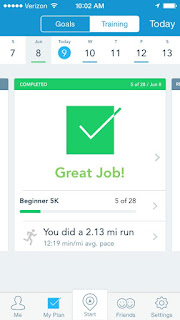 They also have interval training - where you will go at a faster rate for 1-2 minutes and then do a slower pace for 1-2 minues. How do you know when to speed up or slow down? Since I have my phone in my belt and my earbuds in, the audio will come on and tell me. It dims my music or podcast and tells me to start the next interval. I have to admit that I really enjoy interval training. Once I get into half marathon training in the fall, I'm thinking about going with Jeff Galloway, who is a proponent of the run/walk interval method. 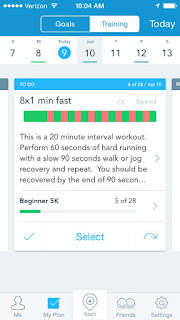 I have the audio programmed to give me updates every 5 minutes. The voice will come on and tell me how long it's been since I started, how long I've run, and my pace. You can also have it track other things, but I like to keep it simple.

My iTunes music playlist (which I'll tell you more about in a later post) is synced with Runkeeper, so as soon as I start my workout, my playlist (titled "Run, Barry. Run!" after my favorite TV show The Flash) will kick in. It will always start at the beginning, and I wish it would remember where I stopped and start there on my next run, but it doesn't do that. So I just go into iTunes and move the songs around to make sure I'm always listening to something new. 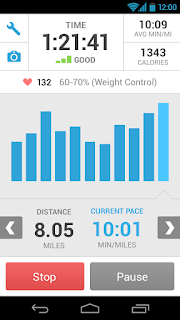 Something else I wish Runkeeper would do was sync to Siri. When I start a run I have to go into my belt and touch buttons to get it to start, and sometimes (especially on sunny days) it's hard to see. If I could just use the button on the wire to get the run to start and stop, that would save me so much hassle!

The thing I enjoy the most is the ability to track my progress via GPS. It automatically tells me how far I've been and can show on a map my location. I don't share these with other people, so it's soley for me to see how much I've done. I used to use Map My Run way back before apps were a thing, but this does it even better. 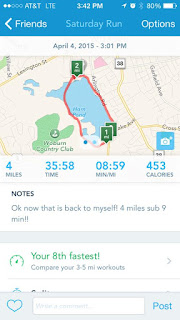 All in all, Runkeeper is a good app for what it's meant to do. They always are trying to get me to "upgrade" to the monthly paid plan, but I don't think that's really worth the price. The free stuff does the job: it gets me to go out and run! 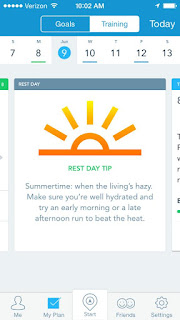 Runkeeper is available for iPhone and Android devices.