Another beautiful Saturday is upon us, and with it another Star Wars article! I have finished four new Star Wars books that were released last week for Force Friday, and I'd like to share my opinions! I will be sharing spoilers of the books, so don't continue reading this if you are planning on reading them!

If you're not planning on reading them, then I'll try to summarize the stories as best I can so you can follow what I'm talking about!

This was the book I was anticipating the most. It is the first book released that covers events after Return of the Jedi, and I have been wondering what has been happening since the movie ended.

This story, however, covers a few brand-new characters as they come together to create a group that will be hunting down Imperial evildoers in two subsequent books (to form a trilogy). The characters are Norra, a Rebel who is an ace at flying; Temmin, her 15-year-old son who is quite a mechanic and inventor; Jas, a female bounty hunter who decides to help based on her past upbringing; and Sinjir, a former Imperial who abandons the Empire after the failure at Endor. 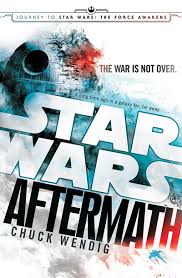 As much as I wanted to get into the story of these four and how they helped the New Republic (formerly the Rebel Alliance) discover a secret meeting of top Imperial brass on a planet called Akiva, I just wanted more on the stuff with which we're familiar. That's why I was thankful for the Interludes, which took place every three or four chapters and were little 3-4 page short stories on random characters across the galaxy.

A few centered around Mon Mothma, new Chancellor of the New Republic Senate (and willing to get rid of Palpatine's emergency powers from 25 years ago), some had Grand Admiral Ackbar communicating with a secret hologram of a spy among the Imperial army, a few took place on familiar planets like Coruscant but contained unfamiliar characters, and some just explained the ravages of the war on people and places we didn't know about!

I really, really loved those Interludes. I kind of wish the whole book had been 50 short stories about the time after the Battle of Endor. One even featured Han and Chewbacca!

I think the final one was my favorite. It took place on...Jakku, a planet featuring prominently in The Force Awakens. The story covered a man escaping the war and finding the planet farthest from the action after his wife and child are killed. Little does he know that Jakku is going to be the home of one of the fiercest fights in the galaxy! 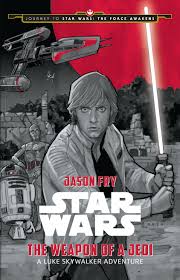 The Weapon of a Jedi (Written by Jason Fry, 184 pages, children's fiction)

This book is targeted towards younger readers, but it was great! The story starts out with a prologue around the time of The Force Awakens, and treats the actual story like a flashback (told to an X-wing pilot, Jessika Pava, by C-3PO). This is Luke soon after he has destroyed the first Death Star and done a few missions as a part of Red Squadron (he's a Lieutenant now).

He is still shaky about his use of the Force, but he's beginning to sense how it can push him towards something or warn him away from others. It's amazing to see how much Luke figures out about the Force by himself! It also features Luke's first battle ("against the living," to quote Han Solo) with his lightsaber - and it's not against Darth Vader!

Luke does his training by himself at the ruins of an old Jedi Temple on the planet Devaron, destroyed by the Empire and closed off with stories of ghosts and demons to keep away travelers. But Luke finds an alternate way in, and is able to perform and improve on the Jedi techniques he knows.

One of the cool things about this book (and the next two I'm going to discuss) is on the back of the cover it says, "Hidden within the story are clues about the highly anticipated new film Star Wars: The Force Awakens."

So what is hidden? 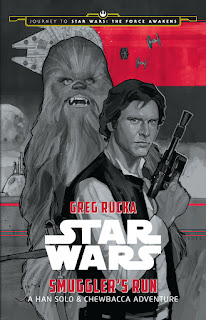 This book was a lot of fun - probably my favorite of the three! Han is telling this story - in the prologue and epilogue it's the white-haired, "Chewie we're home" Han from the second teaser. He's talking to some bounty hunters a story about himself and Chewie from after the destruction of the first Death Star - but they don't know Han is telling the story till the end.

The story itself has four main characters: Han, Chewie, an Imperial Security Bureau commander named Beck, and the Millenium Falcon. Rucka does a fabulous job describing the Falcon and all it's quirks and strengths, and you really feel like it's a character.

Beck is after an important Rebel named Ematt, who has a lot of priority information about the Alliance. Han and Chewie are sent by Leia to retrieve him. As usual, chaos ensues, but they are able to escape Beck's grasp and live for another day.

This is a classic adventure tale, different from The Weapon of a Jedi, which is a bit more philosophical at some points. Rucka was able to voice Han very well, which I felt like Wendig didn't do well in Aftermath. 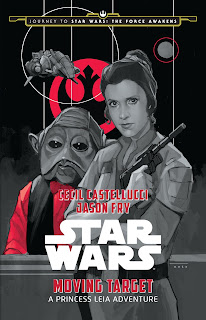 I didn't enjoy this one as much as the other two, but it had some very important moments. Since this takes place after the Battle of Hoth, Han is in carbonite and Luke is in shock over the events of Cloud City. The Bothan spies had just collected the intel on the second Death Star, and the Rebels are starting to plan their attack. To avoid detection while they gather near Sullust, Leia volunteers to lead a small force to the other side of the galaxy, drawing the Imperials in that direction.

One of the crew is pilot Nien Nub, who was Lando's copilot in Return of the Jedi and gets a much more humorous characterization here. The story also mentions how Leia and Nien worked together to save the remaining Alderannians after the planet was destroyed - a plot that was covered in the Princess Leia comic miniseries.

There are some odd points in the book - when they land on a sea planet, they blend in by wearing beachwear. (And it does provide some silly foreshadowing when Leia refuses to put on a 2-piece brown bikini.) Otherwise, we see a Rebel mission in action, as well as the securing of the shuttle Tydirium, which Han and his crew take down to Endor in Return of the Jedi.

This story all but erases the novel Shadows of the Empire, and I can't say I'm disappointed. The book was tolerable, but not great.

Leia gets a good arc here - she initially refuses to go help Han because her responsibility is to the Rebel Alliance. But once she sees a relationship bloom between two of her crew, in very much the same way that hers bloomed with Han, she realizes how important it is to balance love and commitment, and not have either take charge.

I may have missed a few things here and there in my reviews, but the bottom line is that you should read the last three books, and you can skip Aftermath. I hope that Lucasfilm release more of these smaller novels, because they fleshed out the story and filled in the gaps in a small but important way. Happy reading!