If you are only exposed to the Original Trilogy, the emergence of Emperor Palpatine in Return of the Jedi is quite interesting. After spending the first two movies elsewhere, and only appearing as a hologram in The Empire Strikes Back, the Emperor decides to move his base of operations (temporarily) to the new Death Star. While Darth Vader tells Moff Jerjerrod that the Emperor is coming to the Death Star to oversee the final phases of the superstructure, his real motive revolves around Luke Skywalker and what he has "foreseen."

In this movie, Palpatine is old, disfigured, and looks very weak. However, he packs a punch, and is incredibly manipulating to people around him. If he's been on the scene for so long, how much manipulating has he done to get where he is?

Let's go back in time a bit. Sheev Palpatine, before the events of The Phantom Menace, was trained as a Sith in secret. Publicly, he assumed the role of a politician (in the first movie, a senator), which seems to be very fitting for his character. He knew that, to achieve ultimate power, he had to rely on his own knowledge and cunning to move every piece into place.

For starters, he had to get the Trade Federation to be total jerks to his home planet of Naboo. To do this, he communicates only as "Darth Sidious" to the Neimoidians, hiding his face and lowering his voice. They didn't have a clue who he was. While everyone was feeling sorry for Naboo, he was able to convince the right people on Coruscant to remove the Chancellor and vote him the replacement.

He sent his apprentice, Darth Maul, to dispose of the Jedi who had been protecting the Queen of Naboo. He knows he has a worthy apprentice - someone to do his bidding while he sits back in the shadows with the puppet strings.

But there's a catch in his plan! Obi-Wan Kenobi is able to defend himself and cut Maul in half. While this demise might have been foreseen by Palpatine, Maul was certainly under the idea that he would rule this eventual empire with Palpatine.

But Palpatine had other ideas, especially when he saw the young, easily-malleable Anakin Skywalker.

*Sidenote: The Phantom Menace of Episode I refers to Palpatine, not Anakin or Maul! End sidenote*

The plan changed slightly. Anakin would not be ready to become a full Sith until a few years down the road. However, Palpatine's empirical schemes were right on schedule. While he waited for Anakin to be fully ready, Palpatine recruits Count Dooku (AKA Darth Tyrannus) to take the lead in the Separatist movement, while he himself took the side of the Republic. Doing this, he was assured that he would be able to control both sides of the war that eventually broke out!

With the Republic running around worrying about systems leaving the union and impending attacks, Palpatine achieves more power by convincing the Senate to give him emergency powers, which would allow him to make more decisions privately and without a Senate vote.

Three years are spent not only controlling both sides of the Clone Wars, but also continuing to mentor Anakin. He positioned himself many times to allow Anakin to confide in him over personal matters (remember, he was aware of the dreams Anakin had about his mother), almost like the grandfather Anakin never had. Anakin trusts him, and sees every act that Palpatine carries out as the right one, even while Obi-Wan and Padme are starting to doubt. 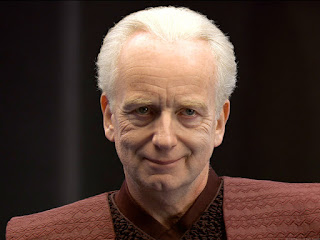 When he orchestrates his own kidnapping and rescue by Anakin and Obi-Wan, he tells Anakin (unbeknownst to an unconscious Obi-Wan) to kill Count Dooku. Anakin hesitates - he knows he shouldn't kill an unarmed prisoner - but at Palpatine's urging, Anakin kills him.

With that, Palpatine knows that everything is ready and Anakin is primed to join him as a Sith.

Anakin is placed on the Jedi Council (without becoming a Master) at Palpatine's request, and the Council wants Anakin to spy on Palpatine. At this point, Anakin is lost - his Jedi Order is creating a storm of doubt in his mind, and Palpatine is giving him reassuring messages that he could still save the one he loves from the death about which he is dreaming. Palpatine is trying to make sure that Anakin loses his trust in the Jedi.

His final touch is getting Obi-Wan out of the way. He feeds Anakin information about the Separatist leaders, and "recommends" Anakin for the job, knowing full well that the Jedi would refuse it. Who would they send? How about Obi-Wan? So Anakin sees his Master and friend take off, and Palpatine knows that the only other man that Anakin trusts - possibly more than Palpatine - has been removed from the equation.

Now is the time to strike.

Anakin's most vunerable moment is now, and his desperation to save his wife leads him to put all his trust in Palpatine (whom he now knows is Darth Sidious) and disown everything about the Jedi Order. To quote Obi-Wan, "He ceased to be Anakin Skywalker, and became Darth Vader."

Meanwhile, Palpatine is able to twist that the Jedi attacked him without being provoked - looking to take over - and freak out the Senate. He suggests that an Empire must be formed to squash all lingering questions about who is in charge in the galaxy, and is met with thunderous applause.

For a moment, Palpatine achieves triumph. He has his powerful Sith apprentice, he has total control of the government, and can pretty much do whatever he wants without anyone being able to stop him.

...And then Obi-Wan ruins everything again!

Thanks to the terrible wounds afflicted on him by his former Master, Darth Vader is no longer the powerful apprentice Palpatine thought he was going to get. Instead, he gets a man who needs to be hooked up to a machine apparatus at all times in order to live. Don't get me wrong - Vader is still powerful, but in Palpatine's eyes, he is a failure.

Which is why he waits for Luke.

Once he realizes that Luke is becoming a powerful Jedi himself (just look at how fast he picked up everything in Empire) and could become even more powerful than his father, Palpatine knows that he just has to wait it out - like he did with Anakin. It was never Palpatine's intention to turn Luke to the dark side without killing Darth Vader. 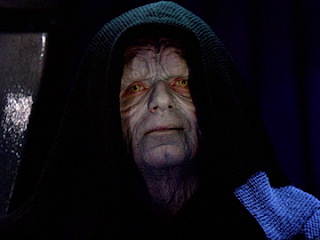 He has the ability to manipulate Luke into attacking Darth Vader, and Vader takes care of the rest. He is able to anger Luke so much that Luke defeats him. Palpatine tells him to kill Vader. (Sound familiar? Like when Anakin was told to kill Dooku?) Luke hesitates, but at Palpatine's urging... Luke doesn't kill him.

Why? Well, because Luke knew what would likely happen to himself, thanks to cutting off Vader's robotic hand. Once he saw what he could become, Luke knew he couldn't do it.

When Palpatine had to improvise, it ended up ruining him. He was such a master of the long-term plan that he never understood how to deal with sudden changes. While Vader's major injuries after his fight with Obi-Wan was quite the hurdle, Palpatine could still use him for his plans. When Luke refused him, Palpatine didn't know what to do with him.

That familial relationship between Vader and Luke ended up saving Luke from death. Luke was able to convince his father to save him, and that was definitely not in Palpatine's plans. The fact that the Emperor was so shocked by Vader's turn meant that he couldn't react quickly enough, and fell to his death.

Palpatine was a schemer. He was able to control the government and the Sith for over 40 years thanks to his politics and planning. But two quick minutes of unplanned chaos threw him over the edge.

I am Claire Nat! I am a teacher and write for TouringPlans.com. I write about anything that interests me - mostly music, Olympics, and fandoms! Follow me @CeePipes or facebook.com/blurbmusings.

More Star Wars Articles by Claire Nat:
Fears and Star Wars
Why Star Wars is the Best Trilogy Ever
Obsession