I was going to save this post for a later date, because it's one of my favorite things to think about in the Original Trilogy. However, I have a feeling that future Star Wars Saturday posts will be leaning a little more towards The Force Awakens after this week.

You see, rumors are overflowing that the new trailer will debut sometime on Monday. I say rumors because nothing has been confirmed, unless you count a deleted Good Morning America tweet that said they'd have something new on Monday. Speculation abounds.

I also want to see Luke and Han and Leia in action, which brings me to my topic of the day.

Of those three characters, the bond between Luke and Han is the one that shines the least. Luke and Leia are brother and sister. Han and Leia are in love. But Luke and Han? That's an interesting dynamic.

When Han first meets Luke, it's in the cantina and Luke has just been thrown around by Ponda Baba. That's not really showing your maturity - especially when an old man has to come to your aid. So Han immediately sees Luke as a kid. It is amazing, if you listen, how many times Han calls Luke "Kid" in the original trilogy.

In Luke's early stages of development in the Hero's Journey, he is still wide-eyed and aware of everything, with a positive outlook and gung-ho attitude. Han by this point is over all of that. He has a realistic - almost pessimistic - view of the world, and knows when to back down and when to step up. These two contrasting attitudes come together in a wonderful way when Han and Luke are together on the Millenium Falcon for the first time. Han actually swats Luke's hand away when Luke is trying to find out what the flashing is on the Falcon's console.

While Han, Luke and Leia escape the Death Star with Chewie and the droids, Han is still not all-in with the Rebellion. Luke, meanwhile, is more than willing to give his life for the cause. Han sees Luke as the bright-eyed boy, even though the death of Obi-Wan really takes an effect on Luke. Luke even takes time to chastise Han about not seeing the big picture before he heads out on the Death Star run.

But Han develops too, and comes back to help Luke out. When Luke succeeds in blowing up the Death Star, what does he say? "Great shot kid! That was one-in-a-million!"

Another great brother moment. When the little brother succeeds, the big brother is there to congratulate him and boost his confidence.

Three years later, Luke has really grown up, even rising to the rank of Commander in the Rebellion. Han is also very involved, but always has his sights set on his departure. When Han decides to leave, the leadership isn't surprised. They express their regret and move on.

But what keeps Han on Hoth a bit longer? It's Luke. He gets attacked by a wampa and dragged away, and Han is the only one who goes out in the freezing temperatures to find him. And he does! He does everything in his power to make sure Luke stays alive. And when Luke is finally recovered on Echo Base, Han reminds him, "That's two you owe me, junior."

Brothers often get into scrapes, and sometimes the older brother has to bail the younger brother out, no matter how tough it may get.

We don't have another scene with Luke and Han except for in passing when Luke is headed toward his speeder. But when Luke finds out that Han and Leia are in danger on Cloud City, he barely hesitates. While his masters are trying to tell him not to go, Luke ignores them because he knows he has to save his friends. 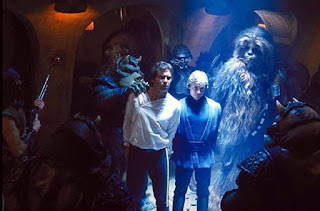 Fast forward one year. Han is a showpiece in Jabba's palace. Even with rumors of something special happening and the success of the Bothan mission, Luke, Leia, Lando, Chewie, and the droids head to Tatooine to rescue their friend. They have the plan down pat - all the way to Leia freeing Han from the carbonite to every single hero being in place at the Sarlaac pit. Han is minimally helpful (well, if you count his accidental bashing of Boba Fett's jetpack, very helpful), but Leia kills Jabba and Luke shows his strength in defeating everyone else.

However, even after Han says "Now I owe you one," Han still calls Luke "Kid" one more time. Remember?

They are on the Shuttle Tydirum. Luke's Jedi powers sense Darth Vader on the Super Star Destroyer Executor. He realizes that maybe going on this Endor mission wasn't a good idea (even though we know that the Emperor and the Empire are already fully aware of the plan). What does Han say? "It's your imagination, kid."

Even after four years of working together, Han still calls Luke "Kid." When the situation calls for it, Han will still act like the older brother, even though Luke has surpassed him in many ways.

When two brothers are adults, they have a lot more things in common. They have jobs, responsibilities, bills, and sometimes more. They can talk as equals instead of talking up or down. The younger brother can even succeed in ways that the older brother couldn't. However, the older brother still sometimes feels like he needs to exercise his elder status at certain points. For Han, this was one of those times.

Han sees Luke grow even more on Endor. When Han decides to ambush the speeder trooper, Luke is the one that cautions him: "Quietly! There might be more of them out there." Instead of talking down to Luke, Han just flashes his smile and says, "Hey! It's me!"

When Han's plan does go awry, Luke is able to aid Leia when she takes charge of a speeder bike to apprehend the other Imperial speeder patrolmen. Han is left behind while the others go on an adventure - that doesn't happen very often.

Finally, Luke uses his Jedi powers to lift C-3PO on his throne to convince the Ewoks to let them go. It's never mentioned if Luke actually tells Han and Leia and Chewie what actually happened, but I like to think if he hadn't said anything, they figured it out. And Han's reaction was that he was pretty impressed with Luke.

A relationship with a brother grows over time. Han and Luke's brotherly relationship certainly didn't grow under normal circumstances, but it still resulted in a strengthening of bonds. The two of them unite in a great battle, and because of the two of them - and countless others - the Empire is dealt a devastating blow.

I hope that in The Force Awakens Luke and Han have a scene together. It would be interesting to see where the two of them ended up in their friendship. Has it been fractured? Does Han still call Luke "Kid"? Is there any awe over what Luke has become (if he's become anything bigger than just a Jedi)?

Right now, we can only speculate on the status of this brotherhood. But hopefully this week, we'll get a little glimpse of what is to come.