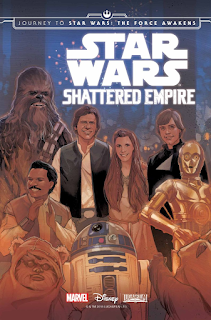 At the start of this calendar year, Marvel comics began running several comic book series that fit canonically into the Star Wars universe. Unlike the series that preceded them, these books were official canon - that is, anything that happened in the comic books could carry over into the books, TV shows, and movies.

To keep us interested in Star Wars - but keep us away from anything spoilery when it came to The Force Awakens - Marvel's series revolved around the time surrounding A New Hope. The main comic, Star Wars, takes place after the Battle of Yavin (and the destruction of the first Death Star) and revolves around our three main protagonists: Luke, Leia, and Han. A second comic takes place during the same time period, and follows the antagonist, Darth Vader.

A third series that is still going is called Kanan: The Last Padawan and follows a Jedi Padawan named Caleb who has escaped Order 66 (from Revenge of the Sith) and is laying low while the Empire forms and grows around him. (He changes his name to Kanan, which is why it bears that title. He's one of the main characters from the Star Wars: Rebels TV show.) 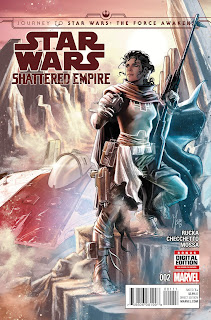 There have been a few limited runs, like Princess Leia, Lando, and one that is going right now, Chewbacca. All of these titles have stayed close to the time before The Empire Strikes Back. Even so, they have revealed little pieces of information that might prove useful when we see the new movies.

Something else that I enjoy is the way they incorporate prequel mythology, technology, and stories into the original trilogy timeline. It's helping to join those two trilogies into one complete saga, and I can appreciate that.

But finally, in September, Shattered Empire was released. This comic series took place in the months immediately following the Battle of Endor (and before the Battle of Jakku). Before this comic (and Aftermath, the novel I reviewed earlier) the events following Return of the Jedi were gloriously dark. As in, we had no idea what happened. After the earlier novels and comic series were declared "Legend," the timeline went from being incredibly convoluted to blissfully bare. Shattered Empire was one of our first glimpses into that time. 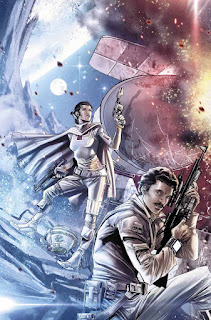 While Aftermath spent its time talking about characters I deem secondary, Shattered Empire used one central figure and wove her story around the three main protagonists. Her name is Shara Bey, an A-Wing Rebel fighter who took part in the Battle of Endor and many others.

There's only four comics in this series (it's not ongoing), and I really enjoyed the stories they told. We see the final moments of the second Death Star through the Rebel pilots, as well as a few other battles they had to fight. We see Han, Leia, and Luke after all the events of the original trilogy wrapped up. (I won't spoil what they're doing, but they definitely fit into their final film characterizations well. Well, except for Leia, who is characterized much better.)

The author of this series is Greg Rucka, who has written tons of comic series and books. I know him from his Batman series, and he also wrote Batman: No Man's Land, a novel I still own and love, and he also wrote Smuggler's Run, a Han story that came out on Force Friday. He does battle scene dialogue better than most - you really feel like you're in the middle of a dogfight, even though nothing is moving on the page. The characters all speak like you feel they should, too. It does bother me sometimes when I read something and I go, "That's not what _______ would ever say!" 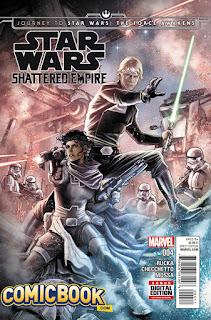 What I loved even more was the art by Marco Checchetto. He did most of the art for this series, and if you want battle imagery in a comic book, he's the one to get. His visualization of the Battle of Endor is incredible. Mix that with Rucka's writing and it's as if we're just watching Return of the Jedi from a different angle. (Which is amazing, in my opinion.)

Angel Unzueta fills in for the Leia/Shara storyline, and while it looked more realistic, it also kind of took me out of the story. I love Checchetto's work that I wish he'd been able to do all of it. However, it's not bad. I almost didn't realize the artist had changed! I did appreciate the fact that they made Leia look like she did in her comic miniseries, which I mentioned previously.

My favorite book of the series was #4, because Luke finally made his appearance. He and Shara went on a secret mission, and we got to hear Luke as the wise Jedi. He's still fierce, but any traces of doubt are gone by this time. This is the Luke I loved from the Timothy Zahn books (now deemed "Legacy") and it was good to see him again. I hope we get even more of him as his wise old self in the movies.

I won't tell you much about the plots of the books, because I want you to go out and read them for yourself! Check out the amazing art and spot-on writing, and see what our favorite heroes have been doing since we heard the last strains of "Yub Nub." You can get the individual issues from Marvel.com or Amazon.com, or wait for the trade paperback, which has all four stories in one and just came out last week.

Check out a preview for Shattered Empire and an interview with Greg Rucka here.

I am Claire Nat! I am a teacher and write for TouringPlans.com. I write about anything that interests me - mostly music, Olympics, and fandoms! Follow me @CeePipes or facebook.com/blurbmusings.