A Letter to my Former Fat Self

Years ago, you came back from China. You'd clearly let yourself go. Chinese food and a lack of exercise didn't help things much. You didn't realize it, however, until about six months later, when you looked at pictures from your vacation with your dearest friends. 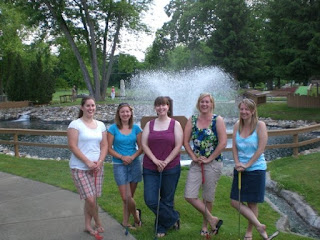 See what I mean?

Suddenly you knew that you were pretty big - bigger than you should have been. All through high school and college you at least had the opportunity to work out and stay up with your exercise. But now that those days were over, drastic measures had to be made.

Do you remember after your first year of teaching in Wisconsin, what you started to do? You started walking all over that little town you lived in. You also changed your diet significantly. Thanks to that, when your coworker Kristin saw you at school registration in July, the first thing she said to you was, "You look good!"

Remember that? I definitely do. (Thanks, Kristin - that meant a lot!)

You did a few races in Wisconsin, but then dropped off a bit when you moved to Colorado. Your excuse was "the altitude." I think the reason was "laziness." Get my drift?

So changes were made. I started doing more walking again. And eventually, when Disney offered a Star Wars-themed half marathon in Anaheim, I knew that was the perfect opportunity to train for something really, really cool.

Now, in a bit of madness, I ended up signing up for two races on this weekend: a 10K on Saturday, followed by the half marathon on Sunday. This meant my training had to be up to speed with back-to-back races.

Did I train properly? I definitely feel like I did.

I followed the recommended plan for the Rebel Challengers, which included gradual increasing of mileage every other week, with a short run on Saturday and a long one on Sunday. This meant that Sundays got really hairy. Church in the morning - usually I was involved in some music thing or another - and then a run in the afternoon. Gone were the days of relaxing Sundays - now it was "I gotta run!"

It got worse the further into December I got, because the sun started to set really early. With a few after-church meetings thrown in, sometimes I was finishing my runs at the same time the sun was disappearing behind the mountains.

I had to try out different nutritional supplements for my run to see what would work best. The chews were a terrible idea; those training runs were horrible, and I felt horrible. The GUs definitely worked better.

I also had to do my interval training. I ended up doing a 1-minute run, followed by a 1-minutes walk. I resisted after a while, because I didn't think it would be beneficial enough. But I soon learned it would be the only way I would make it through a double-digit run.

I learned that mixing Gatorade with water in my water bottle was a good idea, because Gatorade can taste a bit syrupy at times, and this diluted it to something drinkable during a run. Doing half of a GU gel at a time was also wise, since that's a lot of stuff to try to eat at once.

And then, there was the weekend itself. In Disneyland! How am I supposed to not walk around and enjoy the parks before the races?

I had to be careful. I didn't try to cram everything in on one day. I arrived at rope drop and took advantage of the lower crowds. I did more shows. When I had an opportunity to watch an early evening showing of Paint the Night and the Disneyland Forever fireworks thanks to some filming Disney was doing, I plopped myself down for an hour and didn't mind. I was resting my legs, after all.

One of my favorite places in California Adventure was the World of Color area in Paradise Pier, but during the day. I just sat in the front, where there were no people, and watched the midway games, California Screamin', and Mickey's Fun Wheel. It was so relaxing.

But it helped, and I finished both races. I earned three medals, and I feel great. Now, I call you my "former fat self." But I am in no way skinny. I am, however, happy with how I look. I don't look at pictures now and cringe, embarrassed at my giant rear end or big legs. Instead, I'm pleased with how those things look, and can appreciate even more my nice, skinny waist.

Now, a new goal: I want to make sure I don't become you again. Yes, that is harsh, but you're fat. (You're also me; I can be a bit harsh to myself. I am programmed that way.) I need to keep running, though my mileage will be far less than the past few months. I need to keep eating properly. I will keep eating desserts, but not choose so many when given the choice.

I will remember you, and see how far I came to become me.

So thanks. There is a bright future for you. 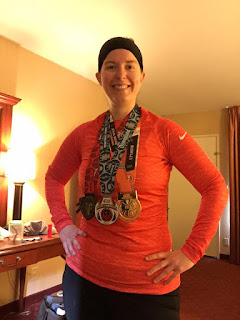