Showing posts from February, 2016
Show all

I was reminded of how my father often brings up his Detroit Tiger teams from the 1960s and 1970s.  Even though they only won one World Series championship in that time, he can name games, players, and important plays from that time as if it happened yesterday.

I've realized this year that this has started to become an annual event for me, regardless of what I have been doing before, during, and after this time.

This feeling usually begins right after my 4-day February break from school. It is a glorious weekend, where we are given Friday and Monday off of school. The promise of that weekend is what gets me through the first six weeks of school after Christmas break has wrapped up.

However, I had a few other things that also were carrying me over: my amazing Disneyland weekend, and the publishing of my very first article in a real magazine. I was definitely riding a high for quite a while.

But, like the past two years, I hit a wall after that weekend. I struggle to wake up in the mornings. I get really touchy about pretty much everything that my friends post on Facebook. ("Stop being so dang cheerful.") I think about moving back to Michigan. I actually br…
1 comment
Read more 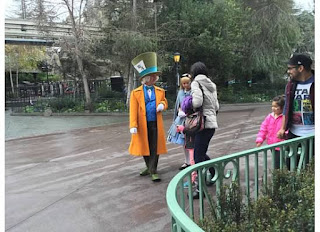 My final day in Disneyland dawned nice and cool. I packed up all my luggage in my rental car (Ruby, if you remember) and checked out of my hotel. I left Ruby in the hotel's parking lot, and I was unsure whether or not I'd get in trouble for leaving her there past my checkout time. (Spoiler alert: I didn't get into trouble. And I also didn't have to pay for parking my whole trip!)

It was really nice to wake up after the sun came up, I gotta say. I ate the hotel's continental breakfast and headed to the parks.

California Adventure was having some early-entry for Disneyland's hotel guests, but they let everyone come into the park, as long as you didn't go outside Buena Vista Street. Luckily, I was hoping for a little more time to check out that area, and while Disneyland wasn't open for another 30 minutes, I checked out the stores.

Disney kitchen items are my kryptonite. While I usually can resist Disney-brand merchandise…
Post a Comment
Read more 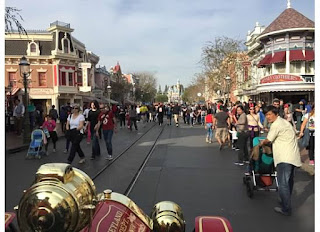 Click here to view my previous article on the Star Wars Half Marathon!

My real Sunday didn't begin until around 2pm, when I woke up from my Half Marathon recovery nap and was very hungry. I got dressed and headed out to Disneyland, where I knew exactly where I was going to eat.

I'd kept things carb-friendly for the most part on this trip to help me in my running, but now that my running was done, my big post-race meal was all about the taste. I made a beeline straight for the Cafe Orleans restaurant in New Orleans Square, where I had heard about some delicious foods that were required eating at Disneyland.

While Saturday had been a very "Southern California Locals" crowd, the Sunday crowd I encountered was more my style: Tourists. And there were a lot of them! Sunday was definitely the busiest park day during my weekend, but luckily for me, I really didn't have a lot planned for the day. 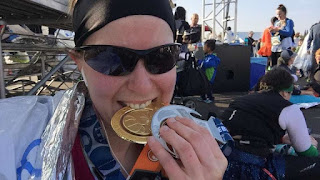 It took me a while to get to sleep the night before, since there were fireworks and people walking outside my hotel room. I had a great air conditioning unit that ran at all times, but that white noise wasn't enough. I ended up going onto YouTube and finding a 10-hour box fan video, which I put on both my phone by my head and on my computer by the door. Only after that did I fall asleep.

I set my alarm for later than the day before, since I knew that I didn't have to be there right at 4. I ended up waking up on Sunday at 3:45.

I skipped the staging area and headed straight for the corrals. This time, for some unknown reason, I was placed into Corral D, which was a benefit to me. Instead of starting out in the middle of a bunch of slow walkers, I would be starting in a group of slow runners instead.

I also headed straight for the corrals so that I would start in the front of the pack, instead of the middle. I wouldn't have to swerve aroun…
Post a Comment
Read more
More posts