Rey: The Hero I Never Knew I Needed 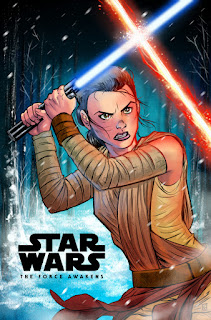 So over the past few months I have been relishing in the Star Wars love. Not only was the hype before December 17 worth it, the aftermath has been even more enjoyable! This isn't the unsustainable, insurmountable, below-expectations Star Wars movie we'd come to know and dread. This movie has legs, and it's going to keep us pushing on till December of 2018.

One of the happy surprises has been the overall love and appreciation of Rey. Her character in the movie is something we haven't seen too often in film. The leading women of action movies tend to be tough, moody, and in charge. Rey, on the other hand, was optimistic in the face of dire circumstances, cheerful when meeting up with the grumbliest scoundrel in the galaxy, and slowly learning how to embrace her Force-sensitive abilities.

The more I read about Rey, the more excited I get. She's the female presence in Star Wars that I've always wanted. I never thought I would copy Leia, nor did I ever feel like Padme was someone I wanted to be. I guess the closest Star Wars female I appreciated was Mara Jade, but even she was a little too bitter for my taste (even though she did marry Luke Skywalker in the Legends books). Nowadays there are far more females in the Star Wars galaxy to read about (thank goodness!) but back when I was growing up, those were the Big Three.

But I love everything about Rey. She handles things on her own because she was forced to at a young age. She's a capable fighter, but hasn't mastered anything...yet. (From what Daisy Ridley posted on Instagram on Monday, she probably will be growing and improving in her skills in Episode VIII.) And, most importantly, if she never gets a love interest in the saga, I would not be disappointed.

So @liangstunts (TRAITOR) is WUSHU FRICKING MASTER and I always try to get him to teach me things... This was today!!! Obvs not great but HE'S amazing and he's also featured at the end 😄😄😄 our stunt team are the most incredible group of people, so lucky I get to train with them!
A video posted by @daisyridley on Apr 25, 2016 at 10:37am PDTk


I spend a lot of my free time daydreaming (and not as much time writing my daydreams down - something I have to fix ASAP) and most of those have to do with me being an amazing fighter who beats down bad guys. So when Rey comes on screen and does exactly those things, I immediately felt a connection.

Her outfits are also great. No skirts, no crazy hairstyles, no sexiness, just simple. They wanted to make outfits that could be easily copied and cosplayed on convention floors. Mission accomplished. So much so that I want to cospay Rey's grey outfit from the end of The Force Awakens, something that I never thought I'd say.

At first I was convinced that she was Luke's daughter, and that made me very excited. My favorite character in all of Star Wars has a daughter that's just as amazing?! Now I still hope that is true, however since I have listened calmly and carefully to bloggers, podcasters, and family (*cough*JARED*cough*), I am now totally fine having her be the daughter of some unknown couple. Or be the granddaughter of Obi-Wan Kenobi. Whatever way it turns out, it won't detract from Rey's story. She's the one that has made her own path, and she will continue to do it regardless of her parentage.

So thank you, Daisy Ridley, and thank you, Lucasfilm, for creating Rey. I'll defend her from the Mary Sue doofuses that are out there, and I'll support her character arc wherever it goes.

Now I gotta find some grey wool to make that sweet jacket...