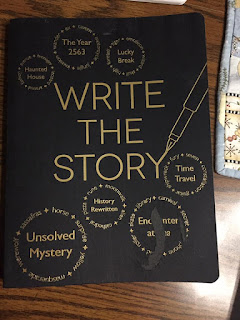 In my quest to do some writing every day, I purchased a writing journal with prompts. Well, I didn't actually buy it; someone had accidentally given me an address book for Christmas instead of what she thought was a journal, so she let me exchange it for something else. So technically, she gave it to me.

There are lots of times when I just don't feel like I have the drive to write. That's where this journal comes into play. It gives me inspiration to write about something.

They also have key words that they want you to include in your story. Sometimes I am motivated to use them; other times I just let them pass me by.

Sometimes my stories have an ending, and sometimes I'm only getting them started before I stop. They only provide one page for each story, and for someone that tends to ramble, it allows me to try to keep my words to the point. Maybe one of these days I'll be inspired to keep writing the story in a different place!

I hope that by the end of the year, I can look back on my entries and see my writing improve over the year.

I am going to share with you the first story I wrote from the journal, which they titled, A Strange Request at a Piano Bar. The words to include were carnival, sprained, mask, oxidation, awkward, apple, juvenile, controversy, twirl, and sassafras. So far, it's my favorite. You can judge for yourself if it's any good or not.

The bar had only been open a few days, and business was bad. The "signature drink," an appletini, was disgusting. The lighting was too bright, and the masks on the walls ended up looking more awkward than regal.

Fortunately, there was a bright spot: the piano. No one remembered purchasing it, but it appeared anyway when the company had dropped off the antique tables and chairs. When we inquired about it, the driver twirled his thick mustache and shrugged. "We ain't spraining our backs loading it back on the truck," was all he said about it.

So while the patrons complained that the bathrooms smelled too strongly of sassafras and the menus were terribly juvenile, they kept coming back to hear the piano.

One of our first customers played it every night. He said his name was Jerry, but I didn't believe him. He was an older guy, thin, with graying hair and big mutton chops. It almost looked like he came from a traveling carnival, but he said he had been in Breckenridge for a while because he "liked the oxidation." I'm not sure what he meant, considering there's less oxygen up here, but to avoid controversy and possibly lose our best asset at this bar, I let it slide.

His fingers were incredible on those keys. When I was wandering through the place at night, I couldn't help stopping multiple times to try and catch what his fingers were doing. The sounds that came out of that piano were simply mesmerizing. He took a few requests, but played the songs all together in a medley. The songs, from hip hop to jazz to pop, all seem to fit together perfectly when Jerry played them through. Sometimes he would just play, and you would catch the occasional familiar melody floating through over the top.

He only had one request for my husband Tom on the first night: no money. "I don't need it. I'm all good, y'know?" Maybe he knew we needed the money and the piano to stay afloat, or maybe he really didn't need it.