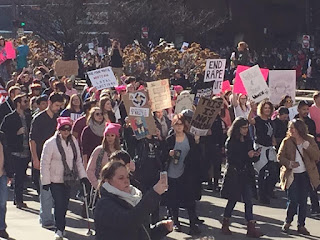 When it came to United States History that I was taught in school, the 1960s were a time of protests, hippies, and marches. I've learned that the decade is much more than that, but I still flash to those pictures in my history books when someone mentions that time.

I knew that marches were a way for people to peacefully show their force en masse. It was something I could watch happening far away from me and take note over why they were marching.

Yesterday, however, I ended up in Chicago on the same day as the Women's March, and I got to experience this peaceful protest firsthand, and it was an amazing sight to see.

My trip on the date of the March was coincidence; when I purchased my ticket to Hamilton, all I was doing was picking a Saturday where I knew I was free of school activities and found an amazing price. I was made aware of the March a few days before, when the anticipated crowds started to get bigger and the rally had to be moved to Grant Park. I get Chicago news stations, so I was able to see where the road closures would be and if it would affect me. (It really didn't, since I ended up walking almost everywhere.) 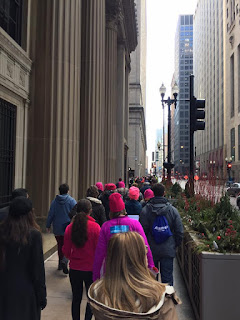 As I waited at the train station in Michigan, several women taking the train were attending the rally, and many more were massed in Union Station when we got there. The bathroom lines were long, but many women just went into the men's bathroom (even with men using them at the same time), and they came out reporting that the men just nodded and went about their business.

They were dressed in their now-iconic pink hats and carrying their signs. The age range was wide - lots of moms brought their elementary-age daughters and seniors were proudly present.

I was headed towards Grant Park anyway, so I simply joined the large crowds heading east from Union Station via Jackson Boulevard. Cars would honk as they passed us, and from what I suspect, they weren't being disrespectful, but showing solidarity.

As we got closer to Michigan Avenue, the crowds really thickened up. Michigan Avenue was still open, so everyone had to wait for the traffic signals. The police were out and ready, advising people to stay on the sidewalk and cross in the right manner. People were starting their chants early, and people joined along with them. 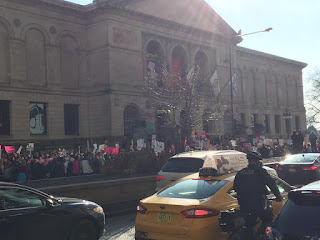 I veered north and headed up Michigan Avenue past the Art Institute of Chicago. There was a giant crowd standing there, cheering and chanting and waving signs. (There had also been a large group by the Barnes and Noble on Jackson Boulevard, but there wasn't enough space to grow terribly large.)

I made it to Michigan Avenue around 10am, when the rally started in Grant Park, and people were still walking around the Art Institute to try to attend. (Grant Park was incredibly crowded at this point, and people were really far back in the park.) I went up to the second level of the Monroe Building and kept watching as people paraded by. Eventually so many people were coming south that the northbound lane had to be closed. People just kept coming. 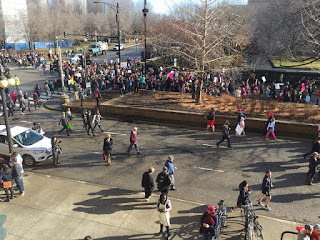 Since my designated lunch location was really close to Trump Tower, I decided to eat early. The bus that was supposed to take me up State Street actually turned left at the Bataan-Corregidor Bridge because they'd closed it to vehicles. I suspect they did that at Wabash Avenue (Irv Kupcinet Bridge) and Michigan Avenue (DuSable Bridge), though I didn't see it at this time.

While I was eating I checked my phone. My mother was telling me that on CNN they thought the crowds in Chicago were the second-largest in the country. She also informed me that they'd had to cancel the "march" part of the Women's March on Chicago because the crowds were too big for the planned area. From what I'd seen of the women and men going to the rally, I knew they weren't going to let that stop them - it was just a matter of where they were going to go! 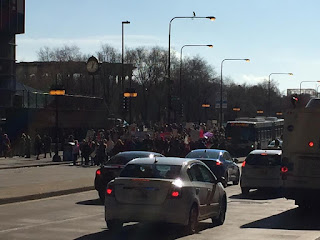 As I returned to Michigan Avenue I actually passed right by Trump Tower. There was definitely a police presence at the building, though the majority of protesters were still gathered at the park.

I walked down Michigan Avenue, and many people were coming back from the rally on the sidewalks. But down near the Art Institute, there was a large group of people on the northbound street (right next to a city bus that was trying to go north as well) marching up. It was a smaller group, but it was a sign of things to come. 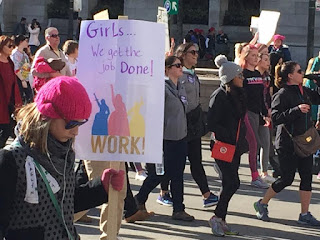 I crossed over to the entrance to Millennium Park right when the massive crowds started to march down Michigan Avenue. I stood on one of the concrete signs at the park entrance and watched as history marched by. There were signs for every cause and people of every age. There were signs on cardboard and fancier ones on tagboard. There were costumes and flags and dogs and strollers and they were coming from all directions. They pretty much closed the Loop for a good hour as they marched.

Initially I saw them turn right onto Randolph Street, which would divert them from Trump Tower, but eventually when I looked back they were going right up Michigan Avenue. Many were turning onto Michigan Avenue from Madison, Monroe, and Washington Street. I got a spectacular view of people marching down Washington Avenue from the raised balcony near The Bean (and yet I can't find my picture that I took...). 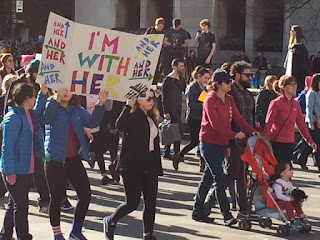 Eventually the crowd size dwindled and there were only a solitary few chanters belting out from the back of the pack. People returned to their hometowns ready to keep the activism going there, and I was left with a lasting impression.

I was so glad that I got to witness something like this with my own eyes instead of just watching it on television. It was peaceful and got the point across that people are not happy with things. When history books are printed from now on, I can point to pictures about the Women's March and say, "I was there. I saw this happen."

And really, that's a pretty cool thing to be able to say.