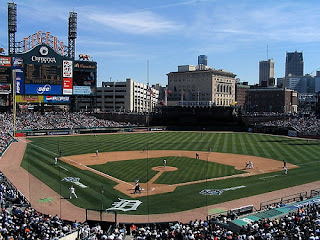 I have gone to many baseball stadiums over the years to watch a variety of teams play. Many of those games were at Comerica Park, but I have been to other stadiums in Milwaukee, Chicago, Pittsburgh, and - most recently - Oakland.

When going from one stadium to another, some people have their opinions on what to bring to the ballpark. Should you bring in outside food? Should adults bring gloves? And should you wear uniforms of teams that aren't even playing that day?

I have my own thoughts. Feel free to disagree:

If you're family is attending a baseball game, then it might be a cheaper, budget-friendly idea to pack snacks. It will also prevent kids from demanding every single piece of food that a vendor brings their way!

Coming as an adult, the best way to avoid the temptations of the stadium is to tailgate beforehand! But another idea is to make sure to only pack a certain amount of cash so you don't buy everything. Set a goal beforehand and stick with it!

I used to read a famous sportswriter who thought that adults bringing gloves to baseball stadiums was stupid. I was not happy with this opinion, because I used to always bring a glove to the stadium!

Is this taboo? Should adults just attempt to barehand incoming foul balls?

Well, if the players can catch balls with their gloves, I find bringing a glove to the stadium a lovely tradition. I still see many grown men walking around with gloves, and I find no problem with it. The only reason I didn't do it at my most recent game was because it didn't fit in my carry-on!

Apparel for Other Teams

I am not talking about wearing the uniform, cap, t-shirt, etc. of the visiting team. That is not a problem at all. But when I attended the Oakland-Los Angeles game with my brother, we both wore our Tigers jerseys and hats.

I have done this on multiple occasions. If the scheduling had worked out to my advantage, Detroit would have been playing in Oakland at the same time I was there. But most of the time that doesn't work out.

Relating this to a movie theater experience, no one will yell at you if you attend a screening of The Avengers while wearing a Star Wars shirt. At the same time, no one should yell at you for wearing the colors of a team that isn't actually playing at that stadium at that time.

I am definitely not the only one who believes this. We saw a Twins fan, an Orioles fan, and a Brewers fan during the A's/Angels game. And I can remember plenty of other games where I saw fans of other teams showing off their colors proudly. I don't have any problem with that.

We did have a couple of guys at the end of the game tell us, "Hey, Detroit isn't here right now." They didn't do it in a condescending way. We just nodded and said, "Yup." And that was it!


Do you have any stadium etiquette "rules" that you think are kind of silly? Are there any traditions that you follow without any question? Comment below!