Day 4 Worship Conference 2017: The Best Day of the Week 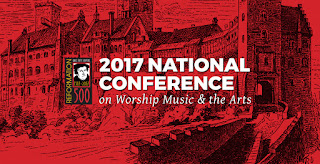 We had two services today: Reformation in the morning, and Confession and Absolution in the evening. Both had the same decorative format: three symbols of the cross hung across the center of the chapel space. An altar was constructed for use throughout the conference - until the closing concert on Friday.

The worship at this conference has undergone some changes over the years. At the beginning it was a means with which to introduce Christian Worship materials that were brand-new to people. Over time it transitioned to new services that were being considered for future publications. Occasionally, the service hearkens back to the worship that existed hundreds of years ago.

The top of worship at the Worship Conference has been debated, too. Is the worship here meant to be accessible to all churches? Or is it supposed to utilize the amazing talent that we have here and take worship to the next level?

One answer to that was found in the letter written by the director for the Commission on Worship, Bryan Gerlach. He says that "Excellence is not elitist, and excellence is not difficult." What some might call "high church worship" is pretty much just "worship" that is being looked at with judgmental eyes. Is the gospel being proclaimed? Then that's solid worship. 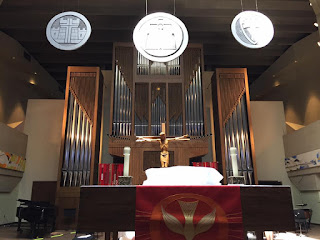 With that in mind, the service opened with another version of "A Mighty Fortress is Our God" while the cross is brought into the worship space, with the pastors following behind. Also brought in were two banners, but instead of the normal banners they were red streamers. They were waved around the center of the chapel before being set on either side of the organ.

Permit me one little organ rant: the organist at this service used the zimbelstern no less than five times during the service. As an organist, I know that this bit of artistry is a great addition to a piece. But I would rather see it used once to great effect rather than five times with minimal effect. End organ rant. (To end on a good note, I loved the Charles Ore "A Mighty Fortress" that the organist played at the end of the service!)

The canticles were new settings being considered for the new hymnal and originally published by Ricky Manalo. I liked their accessibility - something I am always looking for in new music.

At the introduction of "continuous flow" communion 15-20 years ago, it was not executed properly by congregations. (Many - including me - scoffed that it was "drive-thru communion.") Nowadays it has been accepted by many as a great way to keep communion moving along, especially in large settings like this. And people take their time receiving the body and blood (in and with the bread and wine #realpresence) instead of just a grab-and-go method.

In the evening, I was channeled back to my college days because we sang the liturgy called "Prayer at Close of Day II" from Christian Worship: Supplement, lovingly known to MLC alumni as "Compline II." (We did this service every other Monday at 10:00pm. It was quiet and a lovely way to end the day.) There was a focus on confession and absolution, which was found in the psalm-based hymns and psalms that were sung.

We sat down for almost the whole service, and the pastors did too, which I was told was intentional. This is a service at the end of the day, and not only is this rest for our souls, it is rest for our bodies.

We had a pianist for this service, and his postlude performance on "Thy Strong Word" by Wayne Oquin was simply incredible. I had a perfect view of his hands from my position in the balcony, and they were flying!

Pastor Michael Schultz, the project director for the WELS Hymnal Project, presented an address on "A Reformation Perspective on Worship," naturally. He presented it the same way many pastors do at their conferences: by reading what he wrote. As a teacher, I normally find this incredibly dull! I go to conferences where teachers and others do slide shows, group work, and show off children's activities and songs. I want to be an active participant in some way!

Pastor Schultz is very good at this kind of thing, though. His paper (which will be on the WELS worship website eventually) was very engaging, and he added his own wit when it was needed. He even had us sing a few times! For a paper that was being read to us, it was very good. 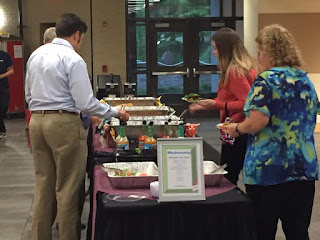 I did the alternate lunch and dinner instead of going to the cafeteria. The lunch was pretty good, and I got to enjoy it in peace and quiet as I looked over Lake Michigan. The peanut butter cookie inside was the best part - thick, chewy, and full of flavor!

However, it was the dinner that stole the show. While I heard multiple people report that the cafeteria dinner was pretty awful, I went to the Union and did their very simple buffet-style meal of BBQ pork sliders, hot dogs, salad, and corn with a cupcake for dessert. Not only was it easy to access, (no crowds or long lines here!) but it was so quiet. There were tables in the area as well, so I sat with my friends at our own table amidst other people quietly enjoying their meals as it rained outside. (Did I mention it rained? That's a rare event at a Worship Conference!)

I did two presentations today, and both were very well presented and provided a lot of information. The first was Marjorie Flanagan presenting "Building a Culture of Singing in Your School." She spent the time talking about ways to improve child singing through singing exercises, toys, and a bit of science. Her idea was that if children sing well, they will enjoy singing. I took lots of notes and marked down several books that I would like to use in my school music curriculum.

The second was Laurie Gauger-Hested, a well-known poet and hymnwriter, presenting "Verses for the King: Writing for Poets and Non-Poets." I really loved this sectional, because as I have gone on in my Year of Writing, I have been doing composing, but haven't been able to write the words to fit my music. Gauger-Hested gave us her steps for writing, and also advised us that the two main keys of hymn writing are scriptural truth and beauty. I got a ton out of her sectional and hope to use her encouragement to write some verses of my own someday! 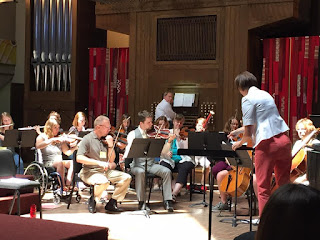 Yes, I am still rehearsing with my choir for the All Saints' Day service, which is tomorrow morning. We are a large group (the group that sang for tonight's service was about 1/2 the size of our choir), but between the talent of our conductor, Kate Tiefel, and the talent of the singers, we got so much done today. I'm back as an alto, and am so thankful for the altos around me helping me out when I'm stuck!

After all that German that the Festival Choir participants had to learn for yesterday, we were given another German piece for tomorrow! It was a difficult piece, too, but we had everything going our way in our rehearsal, and in about 45 minutes we'd learned the piece. It was really something.

However, I am most looking forward to our Mendelssohn anthem, "Grant Us Thy Peace," which we are singing during communion distribution tomorrow. It only has a string/woodwind accompaniment, and it is one of the most gorgeous accompaniments I've ever heard. The first time I heard the ending of the piece, tears came to my eyes. That's how effective it was. I hope it goes well!


So you can see that there was a lot to offer us participants today, the first "real" day of Worship Conference. Tomorrow is an early wake-up call because of my choir involvement, so I should probably wrap this up. I'll just leave you with this guy, who made an appearance today outside of the chapel. (He's about three feet tall, just for reference.) 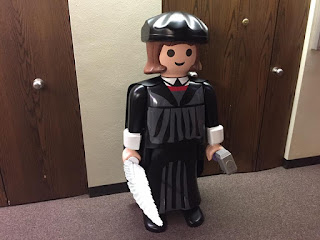