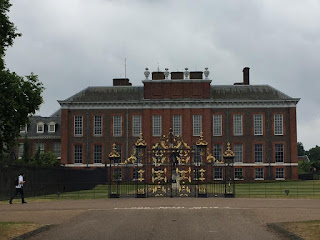 I started out at Kensington Palace, where William and Kate live with their children. I didn't go in, but just took a picture. It took me a while to get there - I was going to take the bus, but I couldn't find the correct bus stop. When I took the Tube instead, I exited outside in the wrong direction and had to retrace my steps!

My route was just as confusing in Kensington Gardens and Hyde Park. Even though I was moving due east, there are trails all over the place in every direction. I had two stops that I wanted to take: the Prince Albert Memorial, and the Diana, Princess of Wales Memorial Fountain. As a result, I was always checking maps to see if I was still going in the right direction. 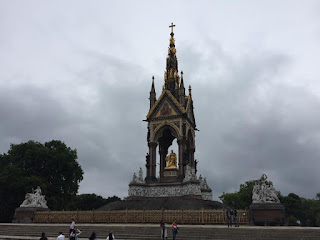 I did find both the memorials. The Prince Albert Memorial is huge and quite gaudy, constructed at the request of Queen Victoria when her husband died. It did remind me very much of the renovations done under Victoria at St. Paul's. The Diana Memorial was opened in 2004 and is much more of a contemplative space. More people will probably be stopping there in the next few weeks since August is the 20th anniversary of her death. 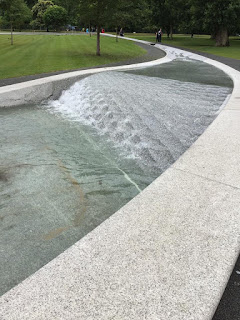 After the memorials my route was much more straightforward, and it took less time to cover more ground. I crossed all of Hyde Park and made it to St. James' Park, which is next door to Buckingham Palace. I got to the Queen Victoria Memorial, which is in front of the Palace, around 10:30. I knew that the changing of the guard took place around that time, and already there were thousands of people clamoring at the wall. Luckily, I had read that it's easier to see it all from the top steps of the Memorial, so I positioned myself there.

As soon as I got set up, I could hear the Band of the Welsh Guards starting to play from behind me. They came up and through the gate, along with the New Guard. They started performing their duties behind the gate, when suddenly we could hear another band playing behind us!

To our surprise, another band and another group of soldiers emerged, carrying the flag of...Canada! There are two bands that perform, and today it was the Royal Canadian Artillery Band. The Queen's Guard (that are at St. James' Palace and come over for the changing of the guard before returning) was Princess Patricia's Canadian Light Infantry. Apparently they are serving as the Queen's Guard until July 3, and are being led by a female infantry officer for the first time ever - Captain Megan Couto. (She did it for the first time on Monday.) 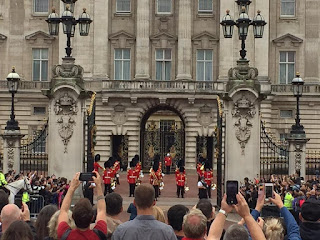 After all the groups were in the gate, they did various marches, the bands played off each other, and then the Old Guard exited, along with the Queen's Guard, who are at St. James' Palace. I got to see the RCA Band several times up close, as they marched down The Mall.

I'm glad I did it, and I'm thrilled I got there right when it started. But I don't know if I would ever do it again.

I walked down The Mall and found Regency Street, where I had lunch at Shoryu Ramen. I had the standard tongkotsu ramen (pork), and it was very, very good! Best of all, it wasn't a large portion, so I slurped it all down gladly. 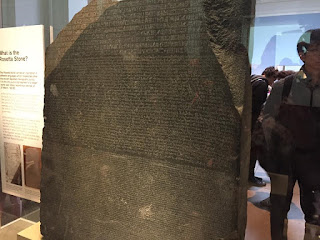 I had been planning on going to the National Gallery, but at the last minute decided to do the British Museum instead. Unfortunately, so did many other people - it was very crowded in the most popular places! It's a free museum, but if you want a map, a book guide, or an audio guide, you have to pay for it. Luckily, I had my own audio guide downloaded from Rick Steeves' website, along with a skeleton map. It helped me get around to the most prominent features of the Museum, including the Rosetta Stone, the head of Ramses II, very interesting Assyrian art, and Greek vases. The most important feature was the remnants of the Parthenon that had been taken from Greece. It was disappointing that they had been taken in the first place, but it was still incredible to see them in person. 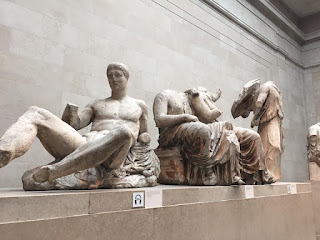 I took the Tube down to Westminster and decided to visit the Houses of Parliament. They weren't doing tours since both houses are in session, but I could visit one of the houses and listen to them debate - for free!

The queue was quite small, which was great. I ended up going to the House of Commons (green), which is a little more loud and opinionated than the House of Lords. Before I could get there, I had to go through a security check point, get a badge, follow the directions of the staff members, sign an agreement that I wouldn't disrupt the session, drop off my purse at a coat check, and go up a bunch of stairs!

However, even through all of that, it was still pretty cool to be there. Not all the MPs were present, but those that did were discussing the Queen's Speech - mostly about Health, Social Care, and Security. The big topic was on tax cuts or raising pay for healthcare workers. A few of the MPs got pretty heated about the topic, and they were on both sides. A liberal kept saying that the tax cuts wouldn't be necessary because we could get money from the "big, giant Tory money tree" that is providing luxuries for the conservative properties. You could tell when their opinion was pointed because other MPs would chime in with a chorus of approval or dissention. 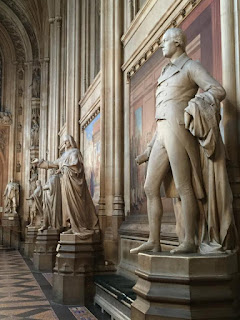 By the way, I had to go through Westminster Hall to get to the House of Commons, and it's beautiful! They had statues for famous British politicians (including Oliver Cromwell, who might be a bit of a controversial choice if you know anything about him) and plaques where famous speeches have been made or famous people have laid in state - I saw the location of Winston Churchill and King George IV's coffins when they were laid in state.

After leaving Westminster, I took the bus up to Covent Garden, where I was meeting up with a friend. We had arranged a meeting time and place, but I was so worried that I would get lost or be late that I ended up in the area an hour early! So I went to Covent Garden, which is a pretty hip district with restaurants, shops, sellers, and buskers all around. It is a common place to go for the evening hours.

I wandered along the main area of Covent Garden and made a few purchases (including some books for the nieces and nephew!) and my piece of London artwork to add to my collection.

My friend Valerie, who was a classmate of mine in high school and also went to China with the group I was in back in 2008, lives and works in London and invited me to one of her top restaurant choices in London. We ate outside and had fish and chips. The fish - it was cod, Dad - was good, but the chips were delicious! I was sad I couldn't eat more of the food. The waitress actually asked me if something was wrong, and I had to be honest and say I was just full! 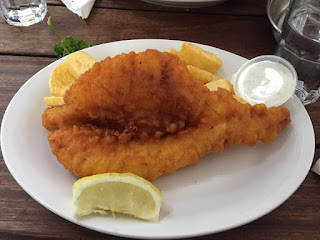 Not full enough to get a half-pint, though. We walked over to a craft beer pub nearby and each had a beer. I went with my normal stout, and it was good, just like normal! I was glad to check off "fish and chips" and "get a pint at the pub" off my to-do list.

We went to the Tube station together and split from there, and I got back to my hotel in record time. It was the latest I'd returned to the room in my three days, and I needed to set aside some time for packing, because tomorrow I am spending the night in a new location outside of London! I can't wait to share my travels with you!

Read about my experience at the Harry Potter Studio HERE!