June 26, 2017
Hello from the United Kingdom! I am in my tiny hotel room after an insane two days where I got zero sleep.

I got dropped off at O'Hare on Sunday afternoon and had no problem with my carry-on and personal bag getting through security. This was my first time on IcelandAir, and it was cool to get a bottle of their special water as you got on the plane! They also had a blanket and pillow at every seat, along with their television on every seat. 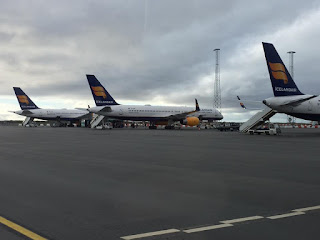 I watched La La Land first, and I absolutely loved it. It had a profound effect on me, definitely. I tried to use the 3 hours of darkness (which encapsulated whatever my "Sunday night" was) to sleep, but there were screaming babies and I just couldn't get comfortable. So I watched Romancing the Stone instead, which was not what I expected, but still fun.

We landed at Rekyjavik airport but had to take a shuttle bus to the terminal itself. In Iceland it was cold and cloudy, and didn't make the area very inviting! I purchased a sandwich (which ended up being delicious) as breakfast and then got right back on the exact same plane.

I watched Inception during this 2 1/2 hour trip, and that movie is required watching. It's brilliant on all accounts.

Before I knew it, we landed (rather roughly) in Heathrow airport! I was in the middle of the plane, so plenty of people got out before I did. The entrance check-in for non-EU and non-UK visitors was excruciatingly long. It wasn't because of the security - they had 30 checkpoints. It was just that there were so many of us!

We finally got through, I got some British pounds out of the ATM, purchased an Oyster card so I could go on the London Underground, and used it immediately to get from Heathrow to my "local" station. It was pretty easy to navigate!

I wandered around for a bit before finding my cute little street where my hotel was located. It was early, but I had given them a heads-up that I'd be there, and they had my insanely tiny room ready. I don't mind - I just needed a bed, bathroom of my own, and air conditioning, and I have all three! 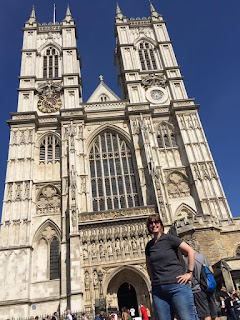 I put up my feet for a grand total of 10 minutes and then was out the door again. I had purchased two tickets for today: Westminster Abbey and the Churchill War Rooms. I was SO glad I had gotten them online; I got to use the "fastpass" line and bypass a bunch of people still waiting to get their tickets.

It may have been the sheer exhaustion, but I cried a lot as I walked around Westminster Abbey. I'd seen it on television and computers for so long, and now I was there in person. I spent a lot of time around the organ and choir area. I got to see Queen Elizabeth I, Handel, Chamberlain, and a bunch of other kings, prime ministers, and poets' tombs, and it was utterly crazy to think that their bones were under my feet!

Best of all, as I walked around, the organist started to practice! He wasn't playing anything fancy, but I just stood there and listened.

I walked down to Big Ben and the Houses of Parliament. They're under construction, and I have a feeling they're adding some safety measures to that area, since that was where there was a car terrorist attack a little while ago.

I loved walking around Parliament Square and looking at all the statues and historical buildings. I walked down Whitehall and made it to Trafalgar Square, which was a sea of humanity that was glorious. 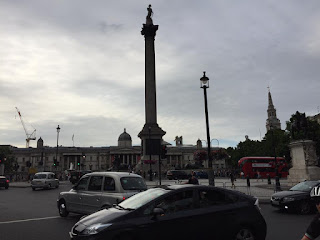 On the way I did the Churchill War Rooms, which was a fantastic museum. I learned a lot about Churchill and the war rooms where they stayed as the Blitz took place above.

I didn't take any public transportation after I got to my hotel, but I'm certainly planning on doing that tomorrow - my feet are tired!

Read about my second day in London HERE!