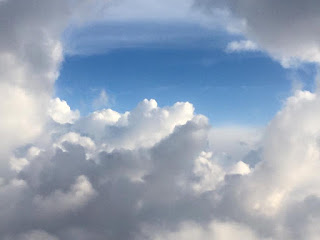 If you are a frequent traveler inside the continental United States, you may think an Atlanta-to-San Francisco flight is a long one: 5 hours. But it isn't until you've experienced a trans-Atlantic or trans-Pacific flight where you know you've experienced a long flight.

My longest trip was definitely from Minneapolis-St. Paul to Tokyo. It was 12 hours in the air. I didn't even realize that planes could stay in the air that long!

So what can you do to avoid complete and total boredom in the air? Read on:

Short flights don't feel short sometimes. Even a simple 2-hour flight from Denver to Milwaukee can take ages if are thinking it's going to be wheels-up, wheels-down.

I have a Kindle Fire and have a few movies that I can watch using wifi. I can only download about four or five to watch offline, but I make sure that they're all ready and my Kindle Fire is charged and ready to go.

Many trans-Atlantic and trans-Pacific airlines will offer movies that you can watch as well - most are free. Nowadays television shows are also offered.

Warning: if you know you're also coming back with the same airline in the same month, ration those movies and shows! They probably won't change them until the following month.

Music is also great. I don't sleep too well on flights, so I put in my headphones and zone out with my music playlists.

Both of these lead well into my next point:

Bring All The Equipment

Headphones are so necessary! It doesn't matter what kind of headphones, whether they're Bose or earbuds or noise-cancelling - just make sure to bring them along!

Other key equipment is chargers. Lots of flights have outlets now, so it's more important now than ever to bring chargers along and not leave them in the suitcase.

If you need some peace and quiet, earbuds are cheap, small, and valuable. It's a great, inexpensive way to tune people out.

The pilots and flight attendants do this kind of trip all the time. Don't think that you're introducing some new idea or concept to them - you aren't. Instead, trust that they know what's going on.

In my trans-oceanic travels the flight attendants are very good at making sure we adjust to our new time zone. They give us dinner, they shut the shades when it's supposed to be nighttime (even if the sun is high in the sky as we fly), and then they give us breakfast about four hours after that dinner. It might seem odd that they're constantly moving  from one phase of the day to the next, but it really does help.

It is also important to remember respect. They're the ones in charge for the next few hours, so be kind to them at the start of the journey and if you get bored, they sometimes make the best people with which to converse.

At the start of the flight, read something! Listen to some music. Then eat some food and enjoy a TV show or movie. Doze off. Then read again. If you keep switching from one thing to another (not every five minutes, mind you) the trip doesn't become stale. And suddenly, you're beginning the preparations for landing!

Right now I am working on getting myself mentally ready for my two long flights tomorrow. Tomorrow? Tomorrow! I can't believe it's nearly here!