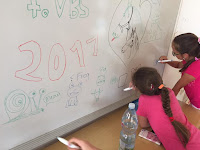 Today I must have heard about ten kids singing some part of the "Baby Shark Song" as I walked down hallways and in classrooms of schools. I wish they'd caught on to one of my Christian songs so I knew exactly what to sing on Sunday, but it's still pretty cool to hear them break into song.

With the huge success of "Baby Shark," I felt like doing the "Tootie-Ta" would be another hit. They enjoyed it, but I think "Baby Shark" still had the edge on the day! 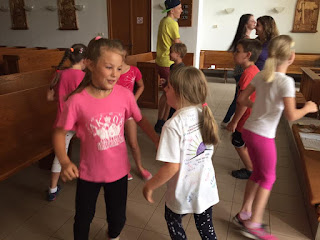 I finally felt today like I was filling the hours successfully. We did a good warm-up. We practiced our songs for Sunday. The lower three groups all did the "Mexican Hat Dance" which they had fun doing. I sang them "Zacchaeus" since that was our story of the day, while they did the actions. A few groups learned a little bit about the brass section of the orchestra. We watched two videos - one of my favorites called "Pipe Dream" by Animusic, and the real life version done by Wintergaten! 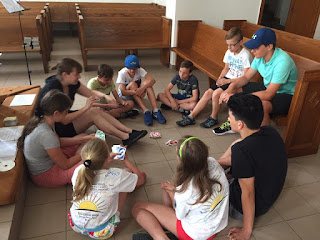 Finally, we wrapped up each session with some rousing games of Uno. Everyone caught on quickly, and it seemed to be enjoyed more than Apples to Apples. (I'm still doing A2A tomorrow, and saving more Uno for Friday.) In the older group I kept the "Draw 4," "Wild," "Reverse," and "Skip" cards, but I kept them out of the other groups just to make it a little less confusing. I'll re-introduce them later. 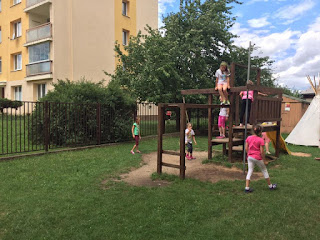 I sat outside to eat my sandwich, and two of the little kindergarten girls came with their lunches and sat down next to me to eat! One of them started speaking rapidly to me in Czech, and I believe she was telling me it was hard for her to eat her sandwich on one side of her mouth because she had a loose tooth. I love when they talk to me like I know Czech, because sometimes when I have them in class they say nothing at all because they're afraid to say something wrong in English!

The day dawned bright and sunny, but after 4pm it started raining - pretty much the opposite from yesterday. Unfortunately, part of the group was going to go up the steeple of St. Bartholomew's Church, so they had to do it in pretty cruddy conditions. They also had the church closed because it was too dark. 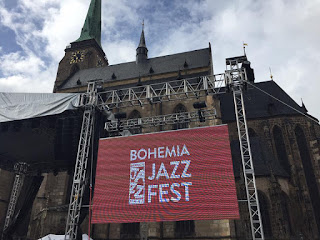 The square is getting ready for the Bohemian Jazz Festival, with a stage and big screen. It started tonight, but will continue into this weekend, when we will be going. I am excited!

We had a big dinner with the Czech pastors at The Pub, which is a chain of restaurants around Europe that have self-serving beer taps right at your table. It also keeps track of how much you and your table drinks, and then ranks them with other tables in your bar. They even have standings for tables and pubs all over Europe!

It only serves Pilsner-Urquell, which I think is a pretty dull beer, but everyone of legal drinking age enjoyed serving themselves and seeing how we ranked compared to other tables. 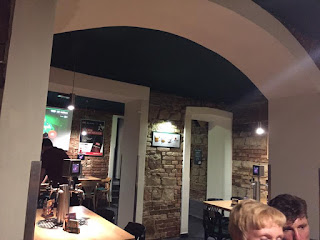 The beer was average, but the food was delicious! I got a Texas BBQ Pub burger, and the barbeque sauce was some of the best I've had. It was a huge burger but I ate the whole thing.

While I was waiting for my food someone at my table who was filling beer spilled his half-filled glass on the table, and it spilled over onto me and my purse! I shoved my purse out of the way as fast as possible and it only got a little wet, but my shoes and socks really got the brunt of it. When I returned home I had to wring out and wash my socks and insoles! (Good thing I was wearing shorts, or my pants would have been covered, too!) If you see me and you smell beer, now you know why.

We are over the halfway mark of the VBS! As I start to get to know the kids, the more I like them. They're a good bunch! To finish off the article, here they are doing part of the "Tootie-Ta!"


Read about Day 4 of the VBS HERE!