July 04, 2017
My aunt and cousin took me to Wittenberg today! With the 500th anniversary of the Lutheran Reformation this year, I knew that visiting a site so historic was a requirement. 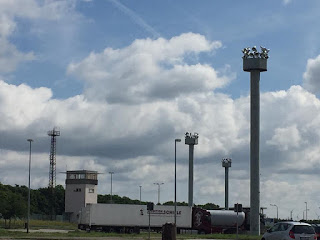 We left Hannover mid-morning, and came upon a bit of traffic. Even though we could have taken the autobahn most of the way, construction and congestion made us take quite a few side roads. While they might not have liked it, I enjoyed driving through the small towns and seeing how they're set up.

We crossed over from the the former West Germany to the former East Germany while on the autobahn, and the current rest area is the former GDR checkpoint area. We got off and got to tour where cars would pull in and get checked out by East German soldiers. The area has a ton 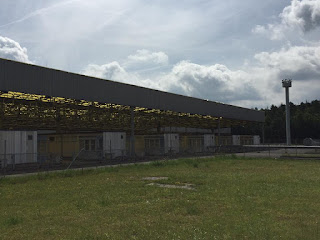 of floodlights to cover the area, and even though they aren't used anymore, it's a reminder to people how while East Germany was very dark, the border between the two was very bright, to prevent people from crossing illegally.

We continued on our way, took a few detours, and arrived in Wittenberg around lunchtime. I guess in an anniversary such as the one we are celebrating this year, I expected a lot more people around. Indeed, there were tour buses around, but generally the crowd was pretty crowded - almost light.

We parked on the street next to the Luther House, and that was our first stop. You enter the courtyard, and there's a fountain and a statue of Katarina von Bora! 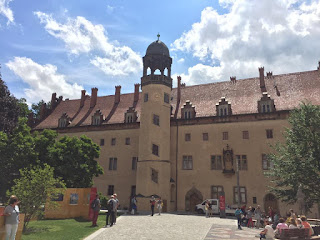 Off to the side is an entrance marked "MUSEUM" that you need to enter to check out the inside of the house. It cost 8 Euro to get inside for adults.

If you're expecting the house to be a lot of "here's Luther's writing desk!" or "here's Luther's chamber pot!" you'll be disappointed. Instead, the rooms have a sign (in German and English) talking about a certain number of years in Luther's life. Then in the room will be documents, paintings, sculptures, and items from that period of time. When they talked about Luther praying to St. Anne, they had a small statue of St. Anne and explained why she had been sainted and why people pray to her. 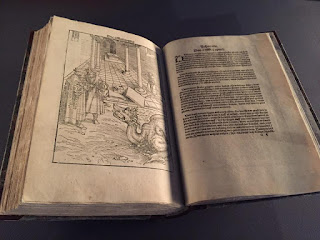 There were some lovely items that I was glad to see. They had one of the original copies printed of the German Bible. They had some letters that Luther wrote in his own hand. They had some of the painter Cranach's original paintings of Luther and his wife - ones that we see in books and on the internet all the time. They pointed out the ruined area of the house where Luther's study would have been located. And they showed the room where Luther would have conversations and debates with students of the University nearby.

My favorite piece was a gesangbuch featuring a song of Luther's. I'll post it below. Can you figure it out? (I was pretty disappointed that there wasn't more stuff about Luther's music and his hymns.) 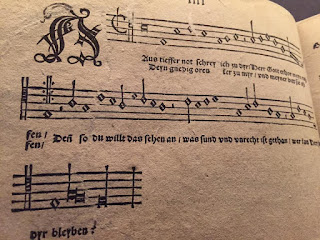 The museum is three floors high. They have a room that talks about Catholicism's return to Wittenberg in the many years following 1517. They feature artwork and merchandise from other anniversary celebrations, like the one in 1983 to commemorate Luther's birth. 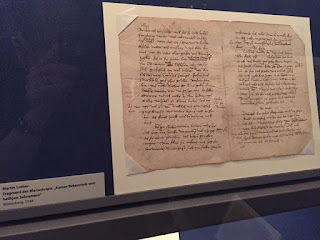 I liked the museum, and was really glad the price to get in was so reasonable. Although I didn't need to read up too much on those posters in each room, I still knew easily what part of Luther's life I was seeing.

We went to the - get this! - von Bora Cafe for lunch. I ordered the flammkuchen - a thin crust pizza with cream cheese instead of tomato sauce - and hot chocolate. I'm really trying to be as polite as possible when ordering, but sometimes I get a bit flustered. When ordering the hot chocolate, I said, "Schokolade...zum trinken, bitte." Then she asked me if I wanted cream on top, and Ben had to translate for me. I almost had it! 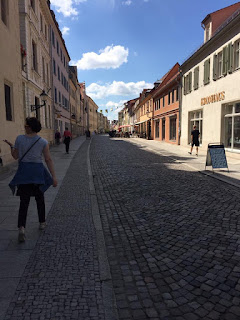 We ate and then walked down the Collegienstrasse, which has been renovated to be a very nice street with shops, restaurants, and a cobblestone road that is open to pedestrians. There isn't any shrubbery, and I would say that would be the only thing that would make the area better.

At the end of the street was the famous Castle Church where Luther posted his 95 theses. The door has been moved to the side, and they've covered it with a bronze engraving of all 95 theses. An Italian group was in front of it when we passed, and after we left the church we heard them singing "A Mighty Fortress" and shouting and yelling stuff. We assume it was good.

Meanwhile, I got to go inside the church. It has been completely renovated since 1517, and not much of it is original to the church. Still, inside they have statues of all the important Reformers of Wittenberg, with Luther and Melanchthon nearest to the altar. Some of them were looking off into space - I think the sculptor should have had them all facing towards the altar, where a statue of Jesus was at the center. 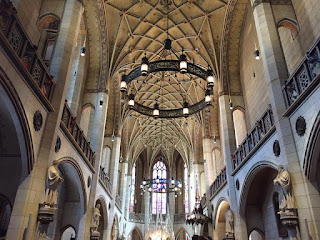 Over near the raised pulpit is a raised concrete box, and on it an inscription informs you that Martin Luther is buried there. After hearing for so many years that he was buried at the church, it was amazing to actually see it!

We walked down the other side of the pedestrian street (Mittelstrasse) to get back to the car. Up on the second floor of the buildings they would sometimes have a plaque saying which famous intellectual, royal, or pastor studied in that building. 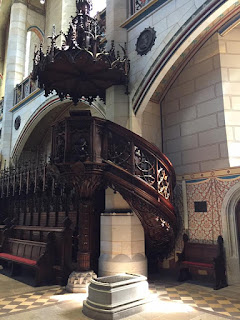 show the kids where I was and how it was connected to the guy they're probably going to hear so much about in the next few months!

We left Wittenberg and drove up to Potsdam, which is outside of Berlin - tomorrow's stop. Ben had made hotel reservations at Hotel Sanssouci, which turned out to be right next to the city square. The hotel was very nice, and they even gave us complimentary transportation tickets we could use tomorrow!

After dropping off our stuff, we walked over to the Sanssouci Park and Palace. It was the home to Frederick the Great, King of Prussia, and he had the park, gardens, and palace modeled after the Palace at Versailles. I have to say, it was pretty well done! It covers a huge area of the park, but we were only able to visit a small corner of it. Fortunately this small corner included the palace. Sanssouci means "No worries" and I guess if it was built today he might call it "Hakuna Matata!"

The palace itself wasn't open in the evening, but all the gardens were open, and you could even walk around the palace without any problems. The evening was gorgeous and we took advantage of it. 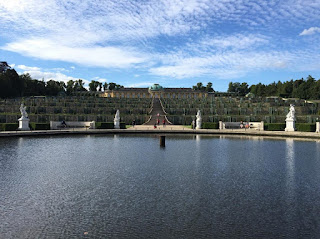 Our dinner was an Italian restaurant called Assaggi right next to our hotel. It was one of those meandering dinners, where you definitely don't want to be in a rush. We got some bread and olives at the start, ordered our drinks, sat for a bit, got our antipasti plate and ate, sat for a bit, got our meal and took our time. Well, I took my time. I tend to eat pretty slowly.

As we ate, I heard a band strike up outside. It was a brass band, featuring a trumpet, an...alto saxophone...two euphoniums, and a baritone! They weren't out there for very long, but I loved listening to some live music.

Potsdam has its own Brandenburg Gate, although it's a little smaller than Berlin's version. We went through it and emerged out in another pedestrian street called Brandenburger Strasse. It was after 9pm, so many of the shops were closed and many of the cafes and restaurants were shutting down for 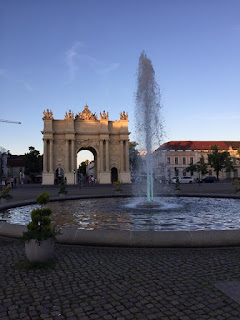 the night. But I still found a window that was serving ice cream, and I stammered through ordering and paying for it all by myself!...with some coaching from Aunt Karla. ("Eine kugel schokolate, bitte. In a cone."

After the stroll up and down the street, all of us were pretty tired. Tomorrow we'll get to Berlin and hit all the major sites! I can't believe I'm going to Berlin!

Read about my day in Berlin HERE!