Europe 2017: Four Countries in One Day

July 02, 2017
It feels like I did nothing today, because I didn't really visit any new tourist attractions, yet I really did quite a lot. I started the day in London, but I am finishing it inside the guest bedroom at my aunt and uncle's house in Hannover, Germany!

Let's start with the morning. My Eurostar train (that would take me through the Chunnel and lead me out to Brussels) wouldn't be leaving until 13:00, so I told myself the night before that I would sleep in! 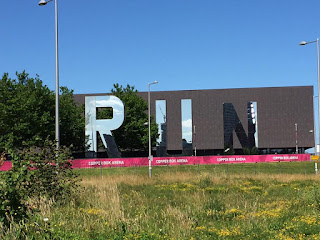 I took my breakfast and walked over to the National Stadium, sitting in a shaded area, and ate my food. I was going to take the bike, but I forgot my credit card that would have allowed me to take the bike during my 24-hour window. It wasn't a long walk, to be honest, but I'm a little sad I didn't get more use out my bike rental.

After my lovely breakfast with a view, I walked back and got myself ready for a long day's worth of travel. My host Sergei had told me yesterday that instead of taking the Tube from Stratford to St. Pancras International Railway (from where the Eurostar train would be departing), I could take an express train that runs between the two stations using my Oyster card, and it would get me there in seven minutes instead of an hour! I had lots of money left on my Oyster card, so it was obvious which method of travel I would take.

I got to the station and had no trouble accessing the train, which was just about to take off. Sure enough, in seven minutes I was back in north-central London.

I had thought about dropping off my green bag in storage and going to the nearby British Library, but the queue for luggage was insanely long and it looked like only one person was doing it. I didn't want to risk the chance of getting my luggage too late, so I opted to stay in the station. I grabbed a hot chocolate from a nearby vendor and sat down. 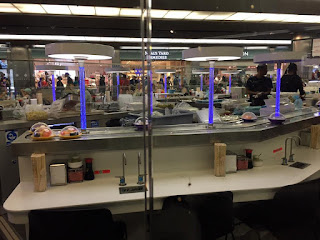 I faced a sushi restaurant where cooks prepare the sushi in small portions and then set it on a conveyor belt, which takes it all over the restaurant. People then can take off what they want and eat it. I didn't eat there, but it looked pretty fun.

Not knowing how long it would take to get through security at the Eurostar entrance, I got over there and saw the very busy area. Two trains go from London - one goes to Paris and the other to Brussels. I got in the queue and my Deutsche Bahn train ticket wouldn't scan to let me through. (I had purchased through DB because of the other legs of my trip). So I went to a customer representative next door, and she just typed something in her computer and let me pass. Whew! I thought it would be worse.

A large family with a bajillion suitcases was in front of me, but because of that holdup, it meant that after my stuff and myself were scanned, the line to the two passport booths was completely empty. Later on I saw that it was really full! First you have to pass through British security, and then about ten steps after that booth is the French security! Technically I was in French territory while being in the middle of London.

My DB ticket said what carriage and seat I was in, but it was in German. During my time before the trip I had been learning Czech, so my German remained a bit rusty. I had to have someone point out that I was in carriage 2 (Wg 2) seat 23 (Pl 23). Now I knew where to look for my other trips.

We boarded the train and it wasn't full. I actually moved across the aisle to have two seats to myself, although it looked like people didn't lie down in the seats on these European trains, so I avoided that.

We stopped in Eppsley before going through the Chunnel and being in France for a hot second, and I went to the dining car and purchased a ham and cheese toastie (croque monsieur). I'd had one in Epcot and thought it was delicious, and I wasn't disappointed with Eurostar's version. Any time I see croque monsieur on the menu, I am going to get it!

I watched Whiskey Tango Foxtrot from my Kindle, and it was okay. It lasted me through the entire Eurostar trip till we got to Brussels. 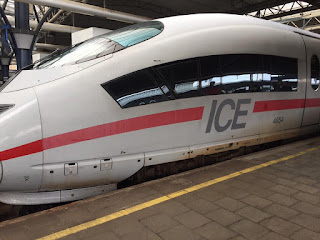 At the station, I started to use a little more logic. Go up to the departure board, look for Kӧln, see the platform. I only had 15 minutes in between trains, but I didn't have any trouble finding my new platform. While on the Eurostar I was facing backwards, this leg had me facing forwards, which was much better for me.

This train was much nicer than the Eurostar, to be honest. It had the carriage number on the outside so you knew exactly where to go. Inside above the seats it said what legs of the journey a particular seat was occupied. (For me, it said "Brussels-Kӧln") So if someone bought their ticket last-minute, they wouldn't take a reserved seat like mine.

I sat back and read magazines on the second leg of the trip, and we quickly made our way to Kӧln, Germany. I had a little more time between trains this time, so I was able to get dinner and get outside. Since trains can deposit passengers right in the middle of the city, it means major attractions are very close. In Kӧln, the attraction is the Kӧlner Dom, a giant cathedral literally steps away from the entrance to the station. And it's enormous! I was shocked at its size. The square around it is full of people, as are the steps that lead up to its entrance. 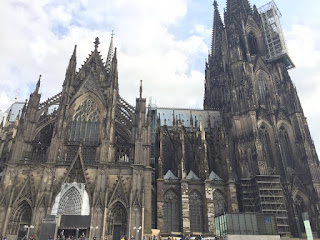 Alas, I didn't have enough time to get inside, but I'm still glad I snuck out to see it.

I went to a bakery and tried out a little German. But he spotted me as an American right away and broke into English. I'm going to try to hide my Americanness and see if I can get away with it!

I took my flatbread to the next train headed for Berlin with a stop in Hannover, my final destination. This train was nicer than the other two! It had video screens saying the next stop and other connections that could be made.

To be honest, all the trains were nice, but I couldn't access the wifi on any of them. It was a real bummer.

The train took off and I sat back and enjoyed the beautiful west German countryside with its rolling hills and towns large and small. I also saw a lot of graffiti, which I guess would be common by a railway.

In Hamm we stopped there for about 40 minutes, which was frustrating. Two police men came through the carriages so I thought there was some sort of security checkpoint, but my cousin told me that they were probably attaching more carriages to the train, which they do often at that stop. Either way, it delayed us and it was frustrating. 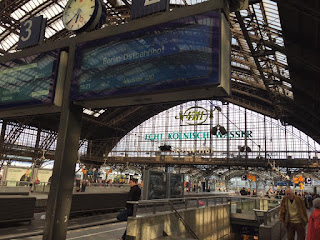 We got on our way, and finally I made it! My cousin Ben said he'd meet me at the platform, which was convenient and meant I didn't have to navigate around the station or city without any help. (Now I'm in a country where I'm not 100% familiar with the language!) He was waiting, and we walked out to his car and I got to see a little of Hannover, though it was getting a bit dark.

He drove me in his car to my aunt and uncle's house about 25 minutes away. I had recently seen my Aunt Karla at my cousin's wedding in Wisconsin, but I hadn't seen Uncle Manfred in 22 years!

Aunt Karla had food waiting for me, and Ben stuck around while we all conversed with each other. They were really nice and spoke English as much as they could while I was around. Hopefully they can help me with my conversational German phrases this week!

Ben left for home, but Aunt Karla and Uncle Manfred and I conversed about everything, from politics to history to travel, until past midnight. That's why this is a little later than usual!

I am looking forward to checking out more of Hannover tomorrow, as well as seeing the rest of my family!

Read about my day in Hannover HERE!