When I informed my Germany family members that I was coming, they asked me where I wanted to go while I was in their neck of the woods.

Considering the year and their approximate central location, I said I would like to go see Wittenberg and the Wartburg, maybe a day trip for both. 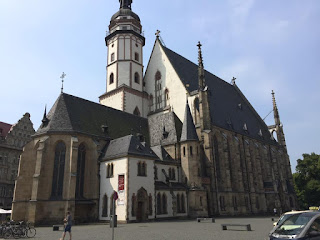 I said this thinking that the two were rather close to each other. After all, people in the Middle Ages and budding Renaissance era wouldn't be able to travel terribly far, especially without our amazing cars, trains, and buses, right?

Well...wrong. As a matter of fact, Wittenberg and the Wartburg are quite far from each other, Reformation scholars. All of the towns that we know from Luther's life are quite a distance from each other, which really shows how amazing their roads and feet really were!

Fortunately, my family accommodated my unresearched request, and that's why we did Wittenberg and Berlin. Today, it was the Wartburg on our way back to Hannover.

Ben and Aunt Karla noticed that the route we were going to take from Potsdam to the Wartburg took us through Leipzig, and asked if I wanted to see it. I had definitely heard of the city before, and agreed. Even with my distaste of the overhype given to Johann Sebastian Bach, I wanted to see his home base for so many years and visit the churches he frequented with his organ music and choral works. 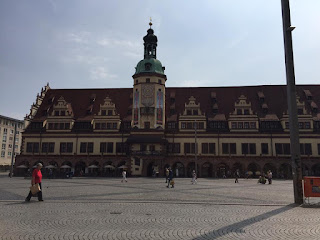 Leipzig is a city that was spared most of the bombs of World War II, but was also spared any repairs and upkeep during its time in the GDR. It ended up being the spark of the Peaceful Revolution that spread all across East Germany in 1989, helping spur on the fall of the Berlin Wall and communism in the country.

Now, the center of Leipzig is renovated and very beautiful. We drove in and actually parked below the Market Square in the center of the city, where a garage has been dug out. When you come up from the shopping area, you can't even really tell that it's down there!

The Market Square has the town hall as its main building. We went around the corner and down the street and found Thomaskirche, the church where Bach worked and weekly released a new piece for his choirs. 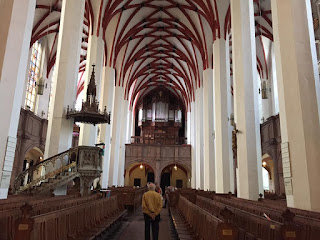 The church is lovely, with painted red lines criss-crossing the arched ceiling above. A small room near the altar has some of the instruments used by Bach's instrumentalists 300 years ago, as well as various books used by the church.

At the altar itself is Bach's grave. I didn't realize he was buried there, and it turns out that wasn't his original resting place - it was moved in 1950 after bombs hit the church where he was originally.

There was a Luther connection - he preached at Thomaskirche, and a plaque on a church column commemorates that occasion. 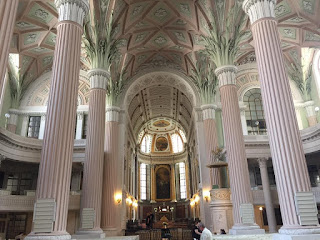 We walked across town and found another important church in Leipzig: Nikolaikirche. This was where the Monday prayer services originated in 1988 and 1989, and where the seeds of the Peaceful Revolution began. They have a room near the altar dedicated to that important time, though it was in German and I couldn't read it. Aunt Karla purchased an English booklet so that I could read up on it; I finished it on the way to the Wartburg. It was fascinating!

The church looks different from Thomaskirche. Instead of red dominating the interior, it's a light green that reflects the Baroque style. Columns end at the top with sculpted leaves clinging to the ceiling. One of these columns can actually be found outside the church, which implies that you are to take what you celebrate in the church out!

We stopped at a cafe next to Nikolaikirche, and it turns out that cafe is the same building where Richard Wagner studied, so the musical hits just keep on coming. 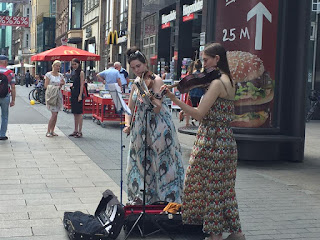 There were many musicians playing on the streets of Leipzig, which made it a lot of fun to walk around. There's a conservatory here, and musicians from there occasionally go out onto the street to play for money. We found two women playing a viola and violin duet together and a man rolling around his electric grand piano and selling his CDs. I swear I also heard the sound of a trumpet as well as an a cappella group, too! The streets were filled with the sound of music, and I couldn't have been happier.

Near the city of Eisenach is one of the most famous castles in Germany: the Wartburg. (I don't need to say, "Wartburg Castle" because -burg is German for castle.) It began to be built about 1000 years ago in the Middle Ages and served as the border of one of the territories. It was mainly a line of defense, so knights lived there. A Roman Catholic saint named St. Elisabeth also lived there. But mostly everyone knows the Wartburg as the place where Martin Luther hid when he was declared an outlaw, and where he translated the New Testament into German. 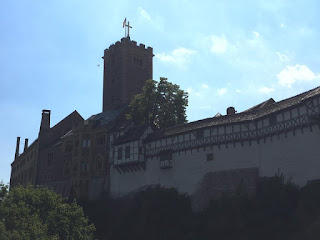 Because of this, the Wartburg was holding a special exhibition on Martin Luther at the castle. Instead of seeing the normal trinkets and historical artifacts from the last 1000 years of the castle, many books, paintings, and items from the time of Luther were brought in.

This exhibition was a bit more objective than the one we saw at the Lutherhaus in Wittenberg. Its main goal was for the viewer to see that Luther was one spark that set the Reformation aflame, and circumnstances and history were ready for his confrontation. It also mentioned how Luther was built up as a cultural and religious icon - especially in the 19th century, when he was almost treated like a saint! (I even saw a cup that was marked, "This was said to be the cup Luther used when caroling around the streets for food when he was in school.") 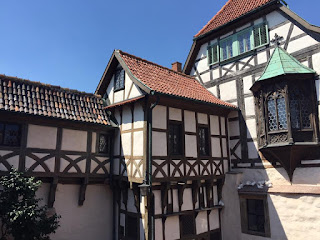 Other parts of the Wartburg were shown, like the chapel and the ladies' room where mosaic paintings show the life of St. Elisabeth. However, some parts are completely shielded by the Luther exhibition, and it's kind of a shame. When I was walking down the uneven hallway with the half-timber structure around me and the windows looking out over the German countryside, I felt the most content. Since much of the same history was covered here as was in Wittenberg, it felt like a little bit of a disappointment.

I did appreciate that the exhibition guided you around the castle, so I didn't feel like I missed anything. The prime draw is the Luther room, where he studied and translated. They didn't mess with this room at all, and in fact the tour ended there. It's a simple room, and it had a desk and chair, a cupboard, and a stove. They used some technology to overlay a few highlights to the wall, like writing, initials, and the shapes of people. I don't think it added much. A film crew was actually in the room with me, but I didn't catch where they were from. 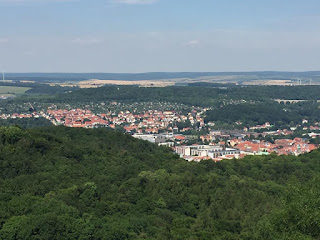 Aside from a stop for a drink at that cafe in Leipzig, we hadn't eaten anything since our hotel buffet breakfast (which was delicious, and it had Nutella packets, and my daily banana has never tasted better). So we stopped at one of the cafes at the Wartburg for a lunch-dinner. Since it was getting to be closing time, there were far fewer people around than there would have been at, say, 12:00, and I liked that.

The only food this cafe served was klösse, a delicacy of the region of Thuringia, the area we were at. It was a balled up potato, served with pretty much anything. We had it with a goulash - meat stewed in dark beer sauce. (Yum!) It reminded me of the kinds of food I would get in the Czech Republic.

We had taken the shuttle (for 2 Euro each) to get to the top of the mountain, but we walked down with our ice cream. (I got a Drumstick.) If you go up to the parking lot and pay the 5 Euro, it is very manageable for an able-bodied person to walk up the stairs to get to the Warburg. But I think it's very nice for all those people who might be getting a little old in years to have that shuttle service.

We had three total rounds of driving 2+ hours, and Ben drove them all. He dropped Aunt Karla and I off in Hannover and returned to his home. Aunt Karla and I enjoyed a light dinner, and I'm looking forward to a day without any real plans tomorrow. I think I need one day with that, and then I can take on the rest of my vacation!

The weather might be cold outside for those of us in the northern hemisphere, but the preparation for the Olympic Games are heating up! (Get it? Heat? Tokyo will be hot? All the news media is talking about it? Never mind.) This week brought up a few Tokyo 2020 items for which we can get excited! First of all, the design for the Olympic and Paralympic tickets were unveiled. The pictogram for the specific event is at the front, and the background colors are based on the Japanese color scheme kasane no irome , which was used for fabrication of kimonos  in the eighth through twelfth centuries.  I personally really like the color scheme, and appreciate that the pictograms are found on there. After all, pictograms didn’t exist at the Olympics until Tokyo 1964! Yesterday, the large Olympic rings (famous for highlight reels) were floated to their resting spot in Odaiba, a man-made island in Tokyo. Next Friday Tokyo plans to do a fireworks show to celebrate the rings and als
Read more