July 05, 2017
Back when I was taking German classes 18 years ago, we were using pretty old books likely published right after the German reunification and watching videos like this:

Basically, all of us assumed that Germany never left the 1980s, even though it was the turn of the new millennium.

Fast forward to today, where I get to see that places like Berlin and Potsdam are not backwards at all. If anything, they're more progressive than the United States! And I got a nice tour of the area from two Germans that know how to get around and see the best things.

So here I am giving you a guide:

How to See Berlin in One Day 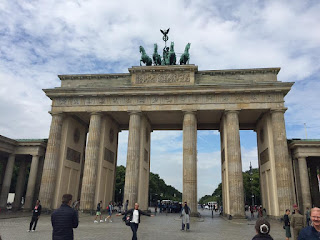 Either know the route you're taking or have someone come with you who does. 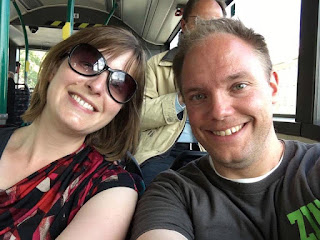 Ben had his phone with him and was always checking to see the shortest way between two points of interest. When we decided to go a bit out of the center of the city, he was able to find a nearby S-Bahn and figure out which trains to take.

I could have done just as much research as I did for England, but with both Ben and Aunt Karla around, I didn't have to. They knew which places didn't need too much time to view and which areas might allow for a bit longer of a tour. We didn't bite for any of the tourist-chasing restaurants or vendors, but went near the train 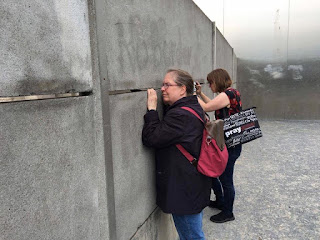 station for something a little more substantial. And, best of all, they speak the language. If I didn't know what something meant on a sign or menu, they quickly translated and described it to me.

This day was done so efficiently thanks to them. I don't think I could show my appreciation enough for all the work they put in for this day!

Be prepared to walk.

Checkpoint Charlie is not right next to the Reichstag. It might take walking a few blocks of normal city streets before finding the next site. All of them make good places to see, so I wouldn't skip anything, but know when it will be necessary to walk around. Have a nice pair of shoes.

Although there might be some appealing little museums or "free" tours offered, be wary. Ben told me that some of the museums are privately run and don't necessarily keep everything as curated as they could be.

At the Brandenburg Gate there were people in bright orange shirts and signs that said, "FREE TOURS START HERE." Aunt Karla told me that they might offer a free tour, but might throw in something for which you would have to pay, and I've also heard that pickpockets also might target those groups, as well. 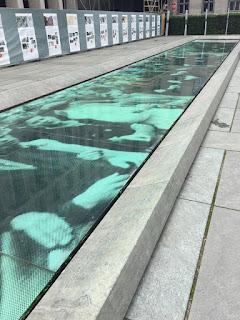 Near Wilhelmstrasse was a building I wouldn't have noticed - it just looked like it had a reflecting pool in a small square. But it ended up being a picture laid out in the square commemmorating the Berlin Riots of 1953, which started with construction workers going on strike but turned into a revolt by many people in East Germany. It ended with tanks and killings. I wasn't aware of that event and wouldn't have been if it didn't cross my path.

Go to tourist attractions...but don't act like a tourist.

We saw the Brandenburg Gate, the Reichstag, the Holocaust Memorial, the location of Hitler's sub-level bunker, the Topographie of Terror, the Mauer Park (the best place to view and understand the Berlin Wall), and the Olympiastadion from 1936. 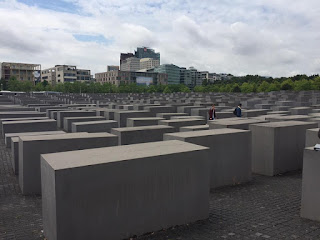 We acted respectfully in places. At the Holocaust Memorial we didn't stand on the concrete slabs or take selfies. At the Topographie of Terror we didn't yell loudly or run around. While I did speak English at some spots, I was as polite as I could be.

Acting like a rude tourist is one of the ways we get dubbed, "Ugly Americans." Thankfully I didn't see too much of that today.

I was recommended by Ben to try currywurst, a pork sausage fried and topped with curry ketchup and curry powder that Berlin claims as its own. You could find currywurst everywhere in Berlin, but I had it at the cafe where we stopped for lunch and ate out on picnic tables by the Spree (river). I thought it was very good! 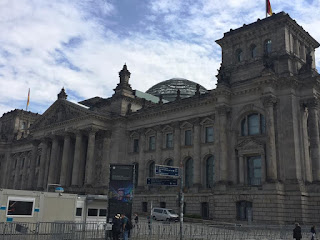 I also had spätzle, a German egg noodle that I love from my MLC days. For dinner I had it served with a cream cheese sauce and fried onion rings. The spätzle was very good, but the sauce was not, unfortunately. You can't hit a home run every time! (The dark beer I had for dinner, though, was very good.)

I sound like a broken record, but European cities - big and small - have very good public transportation. We took a Potsdam bus to get to the Potsdam train station, where we took an express train to Friedrichstrasse and immediately started our touring. 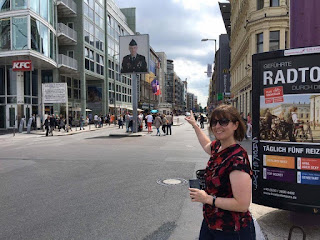 After lunch, we took the S-bahn subway to the Mauer Park, then took it back and got on an above-ground S-bahn train to get out to the Olympic park. We managed to catch that S-bahn train on the way back, stopping halfway at Charlottenburg station, where we picked up that express train that took us back to Potsdam station, where a bus arrived 30 seconds after we did and took us back to the hotel!

We didn't wait for a train, tram, or bus longer than 5 minutes today, and most of the time we had a seat. Our hotel actually provided us with "complimentary" (part of the room) public transportation tickets, and I think we made the most of them!

Get out of the center a bit. 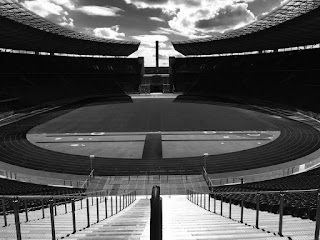 After we'd done the Mauer Wall, I was asked, while eating my "Sweet Dream" ice cream sundae, what I wanted to do next. I was honest! I told them that I knew it was pretty far away, but I really wanted to see the Olympic national stadium where the 1936 Olympics were held.

After checking out the S-bahn schedule, Ben determined our route, we discovered that it was open late (unlike most places) and we were on our way!

It is great that so many important places are in the center of Berlin,  but I found an amazing experience at the Olympiastadion that I'd never been able to experience before. 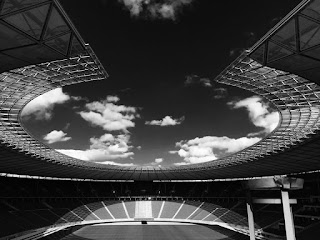 Last week, I saw Wembley Stadium from a distance. A few days ago, I biked around the National Stadium at Queen Elizabeth Olympic Park. But today, we got to pay 8 Euros and go in the stadium!

Now it has was renovated when Germany received the winning bid to host the 2006 World Cup, but they managed to retain much of its original style. While Nazi-era statues and even its bell are still there, we are reminded all over the place that this stadium honors the athletes that competed there.

Not only is it a track and field/soccer stadium, it also has the swimming pool and diving pool and polo and dressage field. We saw the bell tower from afar, and the Olympic cauldron. The familiar Olympic rings hung in between the two pillars was the first thing we saw. It was definitely worth my 8 Euros! 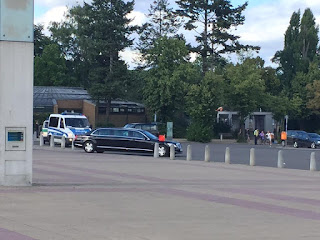 As we got close to the Olympiastaion, we noticed a lot of police motorcycles coming out of one of the exits to the stadium. We had heard that someone from China was visiting, and wondered if this was him. A limo with the Chinese flag came out, along with vans, ambulances, and the normal procession for a prominent figure.

After searching on the Internet, I can say that President Xi Jinping was there, apparently along with Prime Minister Angela Merkel, discussing joint interest in soccer in both countries. I'm glad we didn't come any earlier, or we might have been kept out of the stadium!

Know what you can do. 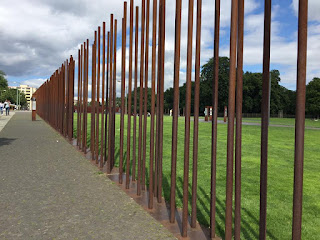 I narrowed down my choices to four or five must-dos, and we were able to stick to them. The Topographie of Terror was the one that took the most amount of time, but it was worth it. We were efficient, saw a lot, and thanks to Ben and Aunt Karla, I had a pretty historically epic day in Berlin!

Tomorrow takes me to the Wartburg, but there might be another location we will stop at briefly. If you look at the routes between Berlin and the Wartburg, you might see a city that is known for something (or someone) that has special significance for me. Any guesses what we're going to see?