July 13, 2017
As I've said before, experiencing the hustle and bustle of a city is pretty great. I have been living in the city of Plzeň and taking public transportation to the outskirts, where the school is located. It almost feels like I'm part of the workforce, although most people are heading into the city while I'm heading out. 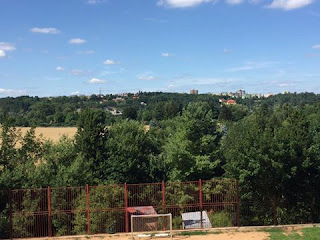 Today my breakfast included a couple of slices of salami, and I put those right into my sandwich for lunch. It was really nice to get that bit of spice at lunchtime along with the ham and gouda!

After VBS I was able to practice the Sunday songs with the Americans - something we hadn't been able to do the past couple of days. The ladies are all singing a song on their own, and then the Americans are singing the verses of "The First Song of Isaiah" while the Czech kids sing the refrain. A drum set is arriving tonight that we are able to use this weekend, so tomorrow I'll be practicing with our resident drummer to coordinate him with those two songs!

I wasn't feeling 100% today and decided to call it early, leaving the men to do their "men's day" of going to a hops farm and seeing breweries and the women and kids' to take their trip into the city square. I returned to my stop on the public transportation and went a couple of steps to a Mediterranean restaurant. 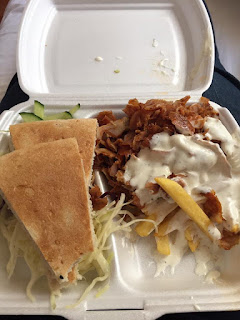 The place had both dine-in and takeaway options, so I just went to the window to order. I appreciated the pictures posted outside the window, and appreciated the speed of the wait staff since I was still deliberating my choice when they came up to the window to take my order! I picked a chicken plate with cabbage, onion, cucumbers, fries, and tzatziki sauce. It took us a bit to coordinate the order since they only knew a few English words and I only know a few Czech words, but it was cheap and fast and in no time I had my box of food.

I've had my fair share of Mediterranean food this trip, but this was probably the best! The chicken was perfect, and the tzatziki sauce with the fries was the perfect touch. If I have time this week, I might go to that place again!

My quiet evening was spent watching the Czech sports channel, which ended up showing some European orienteering competition (not only do they run cross-country, but they have to navigate the map to know exactly where to go!) and then a wrap-up of the 2016 Summer Olympics! Yes, it had a bit of a Czech flair, but it covered all the important events, too.

(Funny bit from last night to wrap up this section: Yesterday was the day that the PE group did water balloons, and there were some left. The apartment looks over by the main entrance, and with a quiet wind you can hear people coming up to the school entrance. Last night I left with the first group, but a second group stayed at the Pub for a little longer. When they came back, they stood outside talking for a little bit. Suddenly, they hear a *sploosh* sound. Caleb, in the apartment, had leaned out the window and thrown a water balloon towards the peole outside! It didn't hit them, but I loved that someone actually gave it a shot!) 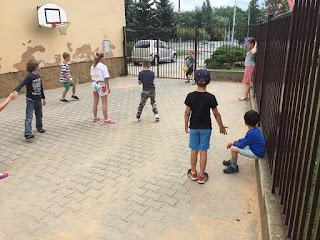 We have accumulated our fair share of fun Music stuff, so there were some times today when I would break out the "greatest hits." Want to do Baby Shark? Okay! Into the Tootie-Ta? You got it! You'd rather do the Hokey Pokey and the Mexican Hat Dance rather than our new Shoemaker's Dance? Sure - why not?

The kids finished learning about the four main instrumental parts of the orchestra today, and I invited them to bring in their own instruments tomorrow and show them off. We'll see if anyone takes me up on my offer.

The youngest group was the hardest with which to work, so we did a lot of singing and dancing to keep them entertained. I even taught them Apples to Apples, though some of them couldn't read Czech, let alone English! The helpers were big helps for that one. 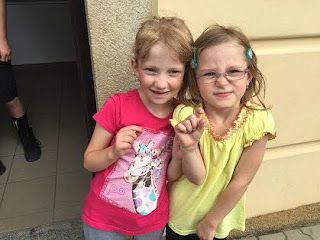 Actually, when the Czech helpers are fulfilling their responsibility, the group is really great. I have noticed that with three of the groups - the helpers are very useful. One of the groups has had some inconsistent helpers, and when they are there they don't do much to help, or goof off. I have talked with some of the teachers about it and they have said the same thing. It's hit-or-miss when it comes to helpers that not only are good translators, but also are good with kids.

I am very thankful for finding the recording feature on that keyboard, because directing the kids is turning out to be very important. I see videos of longer songs from previous VBSs here and I wonder how in the world the music leaders were able to do it!

What do the kids do in other sessions? There's an Art session, led by Ed and Caleb. They don't do "crafts." They do Art. The kids are working on carving fish out of soapstone right now. Yesterday they screen printed the logo of the VBS (Fruits of the Spirit) on their T-shirts and on canvas bags. Ed doesn't mess around when it comes to art projects! 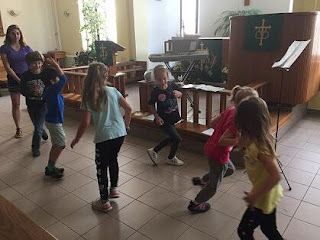 The English session is led by Barb and Becky. They usually stick with English lessons that focus around the lesson of the day. (Day 1 - Nicodemus - Love. Day 2 - The Prodigal Son - Patience. Day 3 - Zacchaeus - Joy. Day 4 - The Good Samaritan - Kindness. Day 5 - wait and see!) They have had puzzles, worksheets, crosswords, word searches, coloring pages, and glitter projects.

The PE session is led by Jeff and Sara (I spelled her name wrong in previous posts!) and it is activity-related, but they also work on the Bible story here, too. They've done basketball, parachute, water balloons, and relays.

We end at 3, but a few parents work later and can't pick up until 4, so the kids have recess if they aren't picked up. Today kids were doing beadwork or basketball at the end of the day. 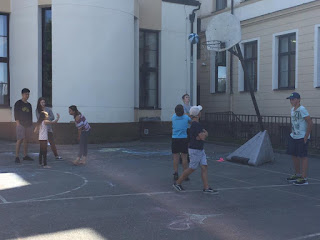 It makes for an incredibly long VBS week. If you complain about working a 3-hour, 5-day VBS back home, just remember those Americans and Czechs overcoming jet lag and the language barrier to pack 5+ days of fun, and seven hours each day!

Not every minute is planned - we have "recess" between each session of about 20 minutes. The kids can relax, play, and eat at these times while the teachers observe or get their next section ready.

We are all pretty tired, and we're not even done after Friday! On Saturday the families are invited to do a field trip with the Americans, and it sounds like we're doing some hiking. Then Sunday is our program in church followed by a potluck. In 2011 we only had two of our VBS kids come back for Sunday, but we're hoping for a better turnout this year, even though a few kids have told us they won't be coming.

To reward you for your patience, here is what you've been waiting for: The Baby Shark Song!


Read about Day 5 of the VBS HERE!