July 08, 2017
When you leave a European country, it is likely you'll never come back. You'll either select a new location to visit next time, or circumstances just mean that you never go back to Europe. 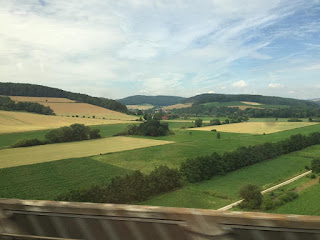 When I left Plzeň, Czechia in 2011, I was determined to go back. I was committed to the next summer, and I even purchased a language-learning mp3 program to help me! But circumstances meant that I moved to Colorado instead of going back. At that point, it seemed like I might never come back.

Well, I was wrong. Currently I am posting this in my room in Plzeň, and it feels just like it did six years ago.

This morning I was eating breakfast with my cousins in their apartment. Judith made me a banana-blueberry-peanut-butter smoothie and scrambled eggs. Ben had purchased trout to go with our bread. I'd never eaten fish for breakfast before but I had it with the scrambled eggs and it was really good!

My train left Hannover at 11:30, so we left from the apartment at 10:30 so that I got there with plenty of time. We stopped at a couple of shops so I could go shopping, and I purchased a magnet for my classroom and a purse hook for home!

The train actually arrived early, and it actually was named the Martin Luther! It was a new train and very long. We were actually on the opposite end, so it was a good thing it showed up when it did! As we walked, Ben said, "You're going first class?" and I remembered that yes, I was! When I had done the reservation, I had decided that this long, 3-hour section of train travel was going to be done with a little luxury. So I was in the second car of the train, in first class! 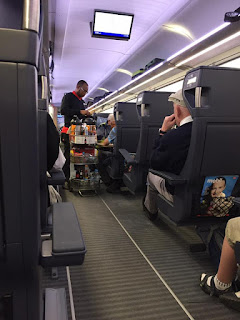 Ben actually carried my bag the entire way on his back, so I reluctantly took it back for him when I got on the train. We said goodbye, and then they waited on the platform until the train left.

I was on the side of the train that only had one solitary seat in each row, and that was awesome. There was a ton of space between me and the seat in front of me, too. And while there was a snack car, first class actually got a trolley, like in Harry Potter! I didn't purchase the entire trolley full of sweets, but I did get some peanut M&Ms in a nice, big bag.

I listened to music, checked social media (which is always slow in the mornings since everyone in the States is still asleep) and watched Wreck-It Ralph, an incredibly underrated movie that I own and watch all the time. I still cry at the end.

As I was watching it, a little girl who was probably four years old was coming back from the bathroom, and immediately gets right next to my knee and is watching the movie with me! I pointed to the screen and told her what movie it was. In perfect English she said, "Why can't I hear it?" I said, "Because I'm wearing headphones." She turned to (what I think was) her nanny and said, "Can I go get my headphones?" The nanny said yes just to get her back to her seat, and gave me an apologetic look. I just smiled - it was really cute! (She never did stop by again. It would have been hard for me to watch it with two sets of headphones.)

The only bad part of my first class ticket was that I was going backwards the whole time. Otherwise it was a lot of fun! 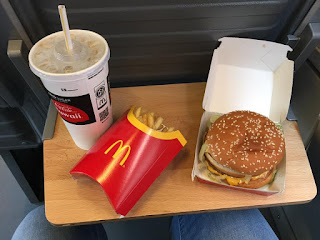 I only had 15 minutes at my stop in Nürmberg and I really wanted something for lunch. My first thought was to finally try McDonald's, and there was indeed a McDonald's right by the train platforms. I ordered a Big Mac Meal and then booked it over to my next train. I ate it at my seat, and I was surprised that everything tasted exactly like it would in the States! (Even the Coca-Cola Light tasted more like Diet Coke! Or maybe I'm just getting used to it...)

This train didn't have reservations, so I just found a forward-facing seat with no one sitting there. (On these smaller trains, it's easier to find open seats.) This was when I put on my "Pimsleur's Czech" mp3. There are 10 lessons, and I have been working on them in a scattered manner since February. But I'd never gotten to Lesson 10! I went right to Lesson 5, which covers the basics of the first four lessons, and then skipped up to lesson 7.

I took a little break as we headed to Cheb, which is right on the Germany-Czechia border, to read my EW magazine with Tom Holland on the cover. I've heard so many good responses to Spider-Man: Homecoming that it's making me want to go to a theater here and watch it! 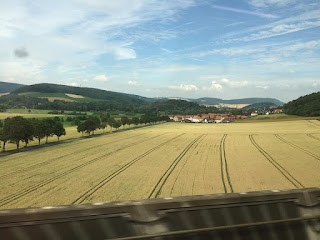 Everything was going fine until the second-to-last stop, when we were stuck there for an extra 8 minutes. Now I know - eight minutes is not much. But it is when your layover in Cheb was only twelve minutes to begin with! Everyone got off in Cheb, and practically everyone was running around the station to get to their platform.

I wasn't sure what my train's final destination was, so I relied on the train number. Fortunately Cheb is small, and I think there were only 3 platforms. We arrived in the middle, and the platforms on either side were going to Praha (Prague), but I remembered my train number and got on the correct train.

This was not a Deutsche Bahn train but a local Czech train that didn't go higher than 110 km/h. We did go through quite a lot of forests, hills, and tunnels, so I can understand the slow speed. 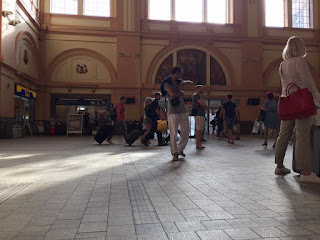 I was only on there for an hour and a half, and then I was seeing familiar sights! Sights I had seen before! I got off the train and I was back in Plzeň.

I waited in the main area for about 15 minutes, and was met by the Czech pastor, Petr, and three ladies from my former congregation in Jefferson, Wisconsin: Sarah, Barb, and Becky. The four of them had gone to a spa city nearby instead of going with the rest of the group canoeing. This was good, because it meant they could pick me up! 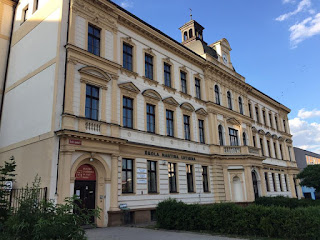 They took me to my hotel and I dumped my stuff before going to Martin Luther School, the location of the VBS next week. It was crazy seeing it again, and I finally was able to get a picture of the school when it didn't look blue! (Dumb old camera.)

We waited up in the faculty apartment that most of the group was using, and got some bad news: the canoe group had missed their train! We were going to meet up with them for pizza but they wouldn't get back till after 9. We would eat without them.

I was glad for a smaller group, and enjoyed the place that Petr took us. I managed to order my lovely Gambrinus beer while speaking Czech! I know I'm not going to use it much because everyone pretty much speaks English, but I appreciate having that in my back pocket. 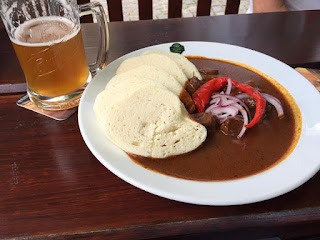 I ate beef goulash with bread dumplings - a Czech staple - and my Gambrinus beer. It was a pretty warm evening, but there was a breeze outside and it was a lovely time.

We walked around the historical city center, which features the St. Bartholemew's cathedral in the center. Petr showed us a few beautiful buildings just around the corner, we purchased some ice cream cones, we grabbed some pizzas for the canoe crew, and we got back to the school just as they were showing up, tired and warm and ready to sit! 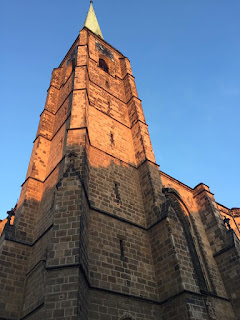 I got the scoop from the Jefferson crew, and their flight over to Praha wasn't very good at all; instead of 18 hours, they ended up having to travel for 32 hours, and one of them didn't get her suitcase! I hope that's the biggest mishap we have on this trip.

I came back to my hotel and completely unpacked. I am ready to not lug around my suitcase for a few days! Tomorrow we have church in the morning, and then I start Panic Day, where I finally look through all my teaching stuff and figure out what in the world I'm doing for this VBS!

Read about my Sunday planning HERE!