July 09, 2017
Today was supposed to be a day where I laid out all my music stuff and freaked out about how much I had to prepare. It ended up being about an hour of work at the table getting tomorrow's plans ready, an hour of prep in my teaching area, and then nothing! I guess I didn't need to panic after all. 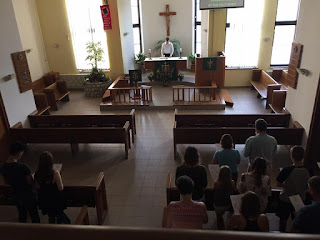 In the morning we had church at St. Paul's, which shares a building space with Martin Luther School. I had volunteered to play the keyboard, and Petr provided me with the hymns before the service started. They weren't difficult to play, especially because he had chosen tunes that are in our hymnal.

I had made copies of my favorite piano pieces so I wouldn't have to lug around all those books, and I played half of them as preservice music. Aside from the Wisconsin crew, only three other people came to church - Petr's son and a man in his late teens who had been baptized last year, and he had brought his girlfriend. All three of them are going to be helping with the VBS this week. Petr's son Ondrej had actually been at my first Plzeň VBS as a 9-year-old, and now he's grown up! 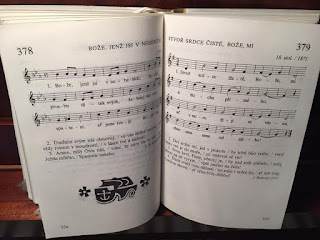 Petr did the service in English and also preached the sermon in English, but the hymns were sung in Czech. I look forward to hearing next week's service, which will probably feature more of the Czech language!

The group spent some time up in the apartment eating lunch and planning a bit. I went back down to the church and practiced a few music pieces I am going to play next week. One of them is a jazz rendition of "What a Friend We Have in Jesus," and while I'm playing it fine, I'm worried about putting it together with the kids. It is going to be very difficult to coordinate not only the kids, but the piano and the drumset. (I didn't pick the song.) Maybe I can hand off the piano accompaniment to one of the high school kids that came along, and I can direct. That's probably where I would be most comfortable. 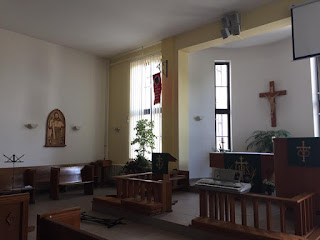 All of us went downstairs around 2 to set up the classrooms we were allowed to use. We set up desks, brought in chairs, and got the lay of the land. As in any school, we have to make sure that we leave everything the way we saw it when we arrived. (The teachers will thank you profusely for your care - believe me!)

I am setting up shop in the church, and much of my equipment was brought with me in an extra suitcase the Wisconsin crew brought with them. I didn't need to make copies or gather any writing materials, but I did need three big items: a keyboard in the front of church, a CD player, and a way to project videos. 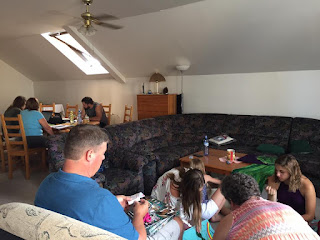 Happily, Petr made sure I had all of them! The keyboard was easy - it ended up being in one of the classrooms we were using, up on a high shelf. It was almost the same keyboard I use at my school! I was glad not to have to constantly go from the main level up to the balcony where the piano is located.

The mission group had a CD player to use, and my CDs worked well in there. Not only are the kids singing, they are also doing some dancing!

Finally, the video projection. I was thinking this would be the hardest to do, but it was actually the easiest. The church has AppleTV, which is exactly what we had in Colorado. But this one is hooked up better and didn't kick me off! All I have to do is use my iPhone (using the church wifi) and use AirPlay. The YouTube videos display on the screen instead of my phone! The first video I played was the video I first heard six years ago and fell in love with on this very VBS trip:

The videos are honestly my last resort if I run short on materials and long on time. I probably won't do this VBS again, so I can throw all the best stuff I use for my regular music classes (over a two-year span) to these kids in five days. (I can also preview some new stuff I'm going to be teaching at St. Paul's this coming year!) 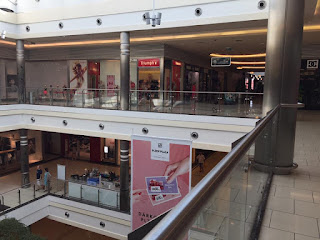 Barb, who had lost her luggage thanks to the airline last week, needed to go shopping for some more clothes, so a group of us went a few stops down the tram to the Plzeň Plaza mall. Yup, it's exactly like a mall in the States: stores, food, escalators, food court, movie theater, sales up the wazoo. There was a grocery store in the lowest level so we stocked up on food, too.

After everyone had gathered back at the apartment (including Petr and Ed, who had gone to look for a tent), we went out for dinner. Jeff had a location in mind, and it turned out to be the exact place we'd gone last night! I was glad because this meant I could order the other thing I had been deliberating: rabbit with vegetables and spaetzle! But they ended up not having it, so I got chicken with ratatouille instead. With all that being said, I think I honestly liked my meal tonight better than the goulash I had last night! 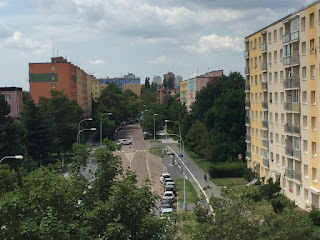 I left the restaurant and walked back to my hotel before the rest of the group was done. It is a little intimidating, after two weeks going solo or in a trio, to suddenly be in a group of 10 other Americans walking down the street. It got a little overwhelming today.

I still am excited for the VBS tomorrow. It might be a group of kids who don't speak much English, but we all share the language of music, and I know how to teach it!

Read about Day 1 of the VBS HERE!