July 10, 2017
You know that feeling you get before you start something - that feeling of being pretty sure that you know what to do, have all the quirks worked out, and have planned for every problem?

I am about five weeks removed from teaching, and it isn't like hopping on a bike. I've been in tourist-mode for two solid weeks, so going back to Miss Nat is kind of a giant about-face. 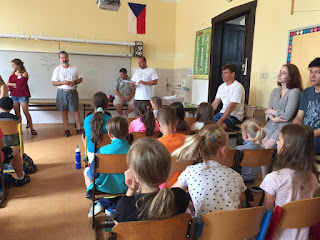 Then, of course, there's the language barrier.

Unlike children at home, though, they cannot understand all the words that I am saying.

We have children from ages 6 to 13, and helpers from ages 14 to 17 - some Czech, some American. The Czech helpers are great because I can make sure the children are absolutely sure about what I am trying to tell them to do. Some of them make great teachers, too; telling kids to move to a different spot or taking away aforementioned fidget spinners without the kids putting up a fight because the helper can tell them exactly what to do. 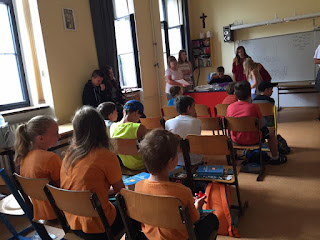 I thought I had a lot to do in the massive amount of time scheduled for the four groups: a whole hour of music! But when I sensed restlessness, I moved on to something else, and before long I had kind of run out of stuff. A couple of times I called it quits a few minutes early and sent them back to the homeroom for snacks and recess, just because I really didn't think it was worth it to keep them there.

In any group in this age range, there are challenges, too. The older kids have a bit of an attitude and don't really care about the music or learning English words. The younger kids don't really get what you're saying and would rather run around the room (or crawl through your legs, as I discovered with one particular 6-year-old).

I'm being rather blunt; my morning was pretty horrendous, but my afternoon sessions were quite good. I had really great Czech helpers and I had adjusted enough from my morning to keep the kids pretty interested.

We watched the "Julie-O" video, and I was able to show a few of them the OK GO video, "This Too Shall Pass."

We sang our Memory Treasure song for today - John 3:16 - and started working on our possible song for Sunday - Koine's "What a Friend We Have in Jesus." However, I have found that during VBS the kids seem to latch on to some other unplanned song a lot of the time (it happened in Apacheland in 2002 and in Plzen in 2011) and we scrap the planned song, so I am going to pay careful attention the next few days to see if any song sticks out. 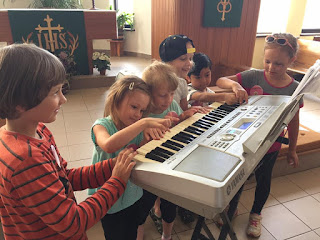 The kids also learned how to dance "The Bunny Hop" (because I knew they'd need some movement) and learned about Vivaldi and Bach, briefly, by listening to some of their music. Tomorrow I'll probably just stick with the groups of instruments instead of teaching them composers. It will be more basic and understandable.

They have about 15 minutes between each session for snacks, bathroom, and run-around time (we have a playground this year, which we didn't have last time!), and a longer break for lunch. The kids all bring food from home, and they come well prepared and eat everything!

After the VBS was officially done (3pm) the kids were allowed to stay for that hour following to wait for parents to pick them up after work. I stuck around a little bit and did some circle volleyball, but I also had to do some piano practice and organize for tomorrow.

The plans for tomorrow still have variety, but I am going to rely on some helpers to teach some stuff, and I'm also bringing Apples to Apples down, because it doesn't all have to be music!

I was very worried in the morning, but felt better in the afternoon. One day down, four to go! 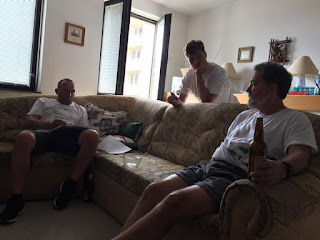 This morning I went down for the hotel's breakfast. It's very nice - two baskets of bread and a plate of hard-boiled eggs, cucumbers, tomato, gouda cheese (gouda cheese is so good-a!) and ham. I used the bread, ham, and cheese I didn't eat to make a sandwich for lunch. I thought it made good economic sense!

After the VBS all the Americans met up in the apartment with the Czech pastors. Martin gladly changed my Euro money over to Czech crowns - no fees! - and gave me my very own tram card. We all planned some outings for the week, though it isn't much considering we aren't usually done until 4. There will be a trip to the top of St. Bartholomew's again, a brewery tour at Pilsner-Urquell, and a "beer farm" trip for those interested. (Which isn't me.) Some are also heading to Karlstejn castle on Sunday, but by then I think I'm going to need to spend the day packing! 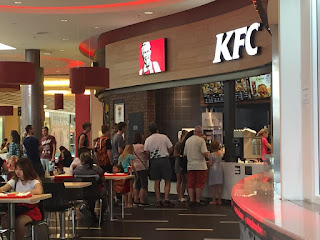 We all went to the Plzeň Plaza for grocery shopping and dinner. I got sushi (too much sushi, as it turned out), and everyone else went for KFC and a Chinese place. Guess which restaurant had the longest line?

I sat in view of the movie theater, and the whole meal I kept wondering if it would be worth it to go see Spider-Man: Homecoming at the Czech theater. It would have to be English audio with Czech subtitles, because I wasn't going to try to understand Czech voices trying to have an accent from Queens.

In the end, I decided to go for it. I asked the lady at the ticket counter if the next showing was in English. She said yes, so I bought myself a ticket. Turns out it was a 3D/4K showing, with seats that rumbled and rolled and special effects. (You could turn off the water option, which I did.)

It was crazy, but I've seen several movies in the theater, and it took me a trip to Plzeň to finally see the Star Wars The Last Jedi trailer on the big screen! I gotta say it looked excellent in 3D.

The movie itself was really great. My theater was nice and quiet but really laughed at the funny parts. After a while I wasn't bothered by all the rumbling and special effects. I wouldn't recommend the experience to my parents, and I'll probably never see another movie like that again, but it was okay for one time!

Tomorrow is supposed to be a little cooler, and my VBS head is on a little straighter. I'll pray for the best!

Read about Day 2 of the VBS HERE!