July 11, 2017
Rain in the summer is great...unless you're hosting a Vacation Bible School and half your sessions are taking place outside. 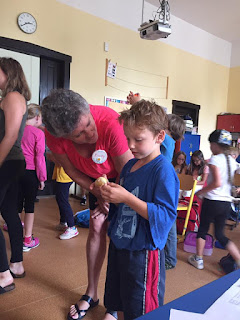 That is the problem we came across when we woke up to rain drumming on the roof. It wasn't a quick rain. It was one of those on-off, downpour/sprinkle/downpour type rains that lasted (conveniently) until the VBS ended at 4. Then the sun came out and shone the rest of the day!

While this issue didn't affect my classes (we're just in church the whole time) it did affect the Art and Bible/Gym classes. While the Gym class was supposed to do water balloons today, they moved that and instead did giant Jenga. They didn't bring them along; on Sunday Ed and Petr went to a Home Depot-style store and purchased timber, which then was cut into large pieces last night and sanded.

The Art crew ended up in the dungeon of the school - a former location for locker rooms, but now an actually pleasant basement room with windows that show the basketball court.

It also impacted our snack/lunch time. Most of the older kids were just fine playing on their phones or chatting in groups. However, the kids younger than 10 were very antsy, and ended up trying to chase each other up and down the halls. Ed started a "Look Up" game, where everyone stands in a circle, he says "Look up," and if you are looking at someone who is looking directly back at you, you're out. It was very clever and calmed the crew down! 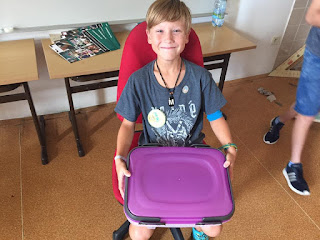 We did have one boy bring a treat for everyone! His mother had made spice cake and cut it into tiny pieces. Becky asked if he'd made it for his birthday, and he'd said no. It was just out of kindness! The whole container was gone by the end of lunch.

My classes were much better with the addition of Apples to Apples, especially my older kids. Even with all the stuff I planned, I could not get myself to stretch class time longer than 30 minutes most times! So I would break out Apples to Apples with the older three classes. While the oldest class didn't have any issues, the middle two classes were a little more confused. I tried my best to encourage them that they didn't have to even know the words, but some were very serious about picking just the right card. (I didn't even bother with the younger class - that would have been mayhem.) 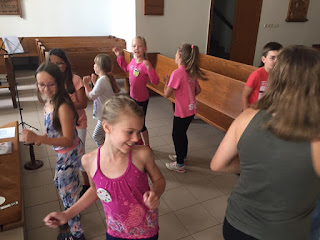 The younger three classes all tried The Hokey Pokey, led by my helper Emily, and they really loved it! I think we were all surprised about that one. They kept wanting to do it - one group requested to do it one more time at the very end of class. (Which we did!) We'll see if they're just as enthusiastic about The Mexican Hat Dance tomorrow.

I also introduced "The Shark Song" to them, and they enjoyed it so much that we did it as a whole group to finish up the VBS day. (Maybe I'll get a video later in the week?)

All in all, the groups were better behaved today. I was a bit more firm when a few of them tried to sit in other places, and they didn't push back. And when they didn't want to do something I was introducing at first, most of them ended up enjoying it in the end. 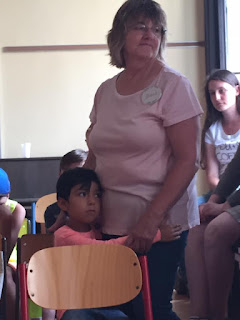 The coming of the rain really cooled down Plzeň. The end of the week is supposed to be really nice. I hope so - on Saturday the VBS is doing a field trip with the parents and kids and I could use a nice, cool day!

One of our teachers, Caleb, has been sick for two days. Petr's wife, Gabby, who practices medicine, came in last night to check him out and prescribe him some stuff. We're hoping he'll be well enough to be with the kids tomorrow.

The Americans didn't do any touring today; instead, we got supplies for hamburgers and grilled! The men had discovered a grill outside and decided to put it to use. Jeff and Becky found a great bakery and found the rolls I loved in Germany. This time I had a hamburger and gouda cheese inside, and it was so delicious! We also had corn and oven fries. Barb, Sarah, and I went across the street to the convenience store and picked up some items, including wine. They even bought me a moscato, my favorite, which I had for dinner!

We all just barely fit on the table, but it was nice to have everyone together for a nice meal. We'll get back to touring tomorrow.

Read about Day 3 of the VBS HERE!