July 07, 2017
I did exactly what I planned to do today, which was pretty much nothing.

It was incredibly necessary, though. Just imagine your vacations! Do you go all out, day after day? Don't you feel incredibly exhausted and grumpy? Isn't everything a little more of a chore, even though it's supposed to be fun and relaxing?

I haven't done a 3-week vacation since 2002, I think, and even then I remember a few off days when we didn't do very much. Now I know why we did that! 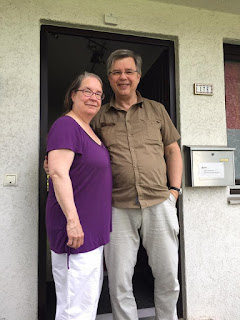 I slept in my room until 9:45 and then went down for breakfast. It was a light breakfast - just bread and muesli, which is oatmeal with other ingredients (mine had chocolate bits) that you eat with either yoghurt or milk.

After that I packed my bag, which was in desparate need of packing. Basically on Sunday evening I had thrown everything out of the bag, including all the books and other things I'd collected. In my Middle Germany jaunt I hadn't taken everything, but now it all had to go back in the bag.

I had 2 hours after that to just relax and go on the computer and play on their piano for a bit. I didn't have anywhere to go or anything to do. I talked to my aunt and uncle and lounged!

I ate lunch with them, and then Ben showed up. I was staying with him and his wife, since they live in the city and it would be easier to take me straight from their place to the railway station tomorrow.

I said goodbye to my aunt and uncle and we drove into Hannover. There Judith was hanging out and watching the Tour de France, and we sat around and watched, too! 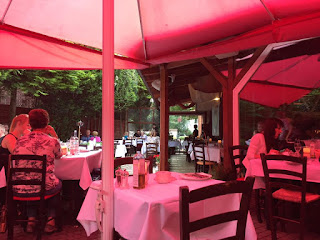 They had made dining reservations for one of their favorite restaurants, which happened to be a Greek restaurant called Ihr Innovativer Grieche. The inside was nice, but no one was sitting there because it was such a gorgeous evening! We sat outside under a big umbrella, and there was a lot of outdoor seating available in a porch area and also right out in the open.

The manager of the restaurant know Ben and Judith, and since he know's she's Dutch he always wants to do the kiss-cheek thing! Before he could do it to me, they mentioned I was American, so he just took my hand and said, "Welcome!" I preferred that very much! 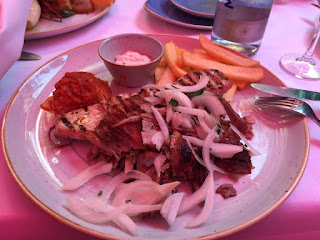 I ordered the gyro, and unlike what you'd expect in the States, this gyro was all of the insides of the sandwich, but no bread was to be found! Luckily, the lamb was delicious, and they still had tzatziki sauce that was excellent. We also had an appetizer of some zucchini-potato balls that also required ample amounts of the tzatziki sauce!

I'm finding more and more that the portions here are very large, and I'm a little sad that I don't have the time to take my extra food home. I am so used to saving the second half of my meal that I never have the stomach to eat the whole thing! I really wanted to finish my lamb, too, but couldn't. 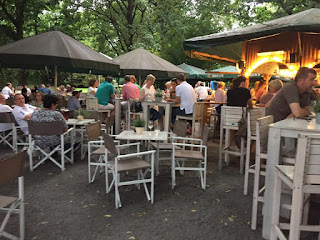 We drove a little ways over to a biergarten near the Tiergarten park, which is a park for pedestrians and wild animals. As a matter of fact, we saw a herd of deer grazing about 100 meters away from the biergarten!

We made sure to sit under another umbrella because it was starting to look like rain. We were almost done with our drinks when it did start to rain, sometimes heavily. We stayed out of the rain for the most part, but when it got nice and heavy the wind was letting it in, so we decided to go. It rained all the way home, and then decided to stop. (Figures.) 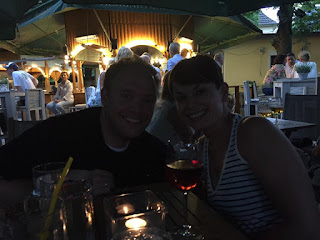 And that was my day! No pressure, no schedule, just an enjoyable time with my family before I depart for my next adventure. Get ready, because we're heading to Czechia next!

Read about my trip to Plzeň HERE!