July 14, 2017
It's come to that time in the trip where I should send out some thank-you notes. I'm not attempting to make these sound funny, though they might come across as such.

But first, some music...

Today as the group was headed for the Pilsner-Urquell tour, I got to the corner right when the tram was arriving. I haven't had the best luck having the train arrive right when I get there, but at least it appears every 8-10 minutes and is pretty regular.

The kids unfortunately might not remember anything else but "Baby Shark" from this VBS.

Have you ever done that song with a drum set? We are going to do it on Sunday - Ed secured a drum set for the weekend, and it arrived last night. Ben is playing it - we practiced today and I really enjoyed it! 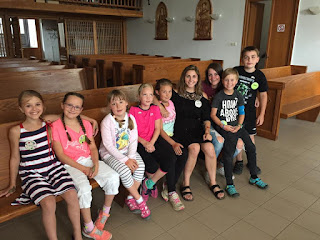 I've walked a ton this vacation. When I was able to catch the elevator, everything was right with the world. But you need a key to access it from the ground floor, which made using it a little trickier.

Thank you...orchestras...for playing to the masses and publishing your movie soundtrack recordings on YouTube.

To wrap up our study of the four instrumental types in an orchestra, I found three great videos of orchestras, including close-ups of all the different instruments being played. I let the kids decide - did they want to watch a performance of the music from Pirates of the Caribbean, Harry Potter, or Star Wars? It was pretty evenly split between all the sections! The morning classes really wanted Star Wars, while the afternoon wanted both Harry Potter and Pirates.

Thank you...other teachers...for deciding to have skit practice this afternoon and shortening my classes.

It's been a long week of teaching, and I really was glad to hear that the English teachers wanted to have extra time this afternoon to practice the skit (The Parable of the Good Samaritan) that will be done on Sunday. 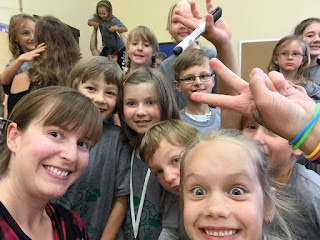 Instead of trying to fill an hour of time, I only needed 45 minutes. We skipped a lot of things that I would have been glad to do just because we didn't have the time - hallelujah!

(And even though I could have told them I love directing plays, I didn't. I sat back and let them take care of it.)

Thank you...kiddos...for wanting us to sign your shirts and photos.

We didn't leave enough time at the end of the day to distribute the screen-printed shirts and get a good photo. But even so, the kids still grabbed markers and were asking fellow kids and the Americans to sign their shirts and the nice photo sheet that Petr had made.

It was fun having kids come up to me and hand me a marker to sign their stuff. My shirt was upstairs and I couldn't do it, but I was okay with that - my last shirt got signed with the wrong marker and it ended up bleeding. This is a nice-looking shirt and I want to keep it nice for a bit. 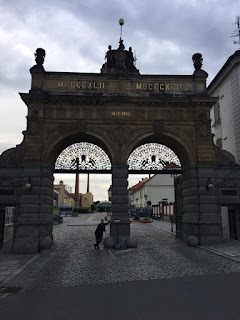 Thank you...PilsnerUrquell...for letting us off the hook for cleanup and after-VBS-care by scheduling our tour for 4:30. (And thank you for being open for a tour!)

Martin scheduled our tour this morning online, which meant we were expected to be at the brewery by 4:30. This was much more pleasant than showing up and finding out the tours were done for the day.

We took the tram and wandered around a bit before we found the entrance - a double-arched gateway called the Jubilee Gate, built for the 50th anniversary of PilsnerUrquell in 1892 and featured on all their stuff.

The tour was almost 2 hours long, but allowed us a look at their modern packaging facility, their historical brewery, their modern brewery, a film that explained the history and procedure for brewing, a look at the barley and hops (and taste them - barley is great, hops is bitter!), and see the giant labrynth cellar where their barrels are kept. 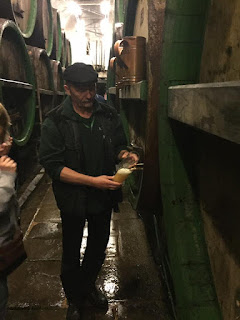 To finish, we were able to taste some of the unpasteurized PilsnerUrquell straight from the barrel. And this wasn't a little taste tester, either - this was a full glass! It was pretty darn good. Even with its low alcohol percentage (4.4%) I hadn't eaten in six hours and was a bit lightheaded in the end. Luckily we ate right afterwards.

It would have been weird to go to Plzeň again and still not do a tour. I'm glad I did it - I've heard it's the best brewery tour you can do!

Thank you...Na Splice...for not simply saying "cabbage" on the menu and not saying what it truly was...SAUERKRAUT.

Quite a rude awakening to get my food and realize it's all on a pile of sauerkraut.

In its place is a stretch of green grass that makes a lovely park! We walked through there as we headed back to the tram stop.

Thank you...girls in the Pear group...for finally giving me my chance to show piano skills.

One of my favorite memories of 2011 was having a girl bring a book of piano music and asking me to play. Four or five girls crowded around while I played and we all sang along.

This year before the Pears group had their final session, I was in the church and a couple of them came in early. I let them play on the keyboard, but I also pulled out "The First Song of Isaiah" and started playing it. They all started singing along!

Those copies of the piano music I had were nice, but I'm not sure I'm going to take them back home. One girl, Christie, was really good at performing by just using her ears and performing popular songs. I gave her one of the piano pieces and encouraged her to look it up. I think she was flattered - I hope she wasn't overwhelmed by the notes!

It's just so good! Especially the Orion brand.