Showing posts from October, 2017
Show all

We don't know all of the planets in the galaxy far, far away, but based on the sample size it looks like planets range from the hot and dry to the cold and bleak. The Rebels and our fearless heroes were forced to retreat to some interesting locations, and because of that we got to see more than just planets with buildings and flying vehicles. Instead, we enjoyed forests, tundra, deserts, and swamps. The more we watch, listen, and read about Star Wars locations, the more we get sucked in. Eventually, the thought will cross our minds: "Where would we want to live in the Star Wars galaxy?" It's easy for me to pick where I would want to live. If the moon of Endor was a planet, I'd like that. But if I had to be scientifically precise and be forced to choose a  planet , I'd say Naboo. Topography The planet of Naboo is one of the first Star Wars planets they showed where there was a variety of landforms. Naboo has swamp, grassland, plateaus, mountains, and
Post a Comment
Read more

With the opening of a new trilogy of movies, theories and speculation abound as we read waaaaay too much into little things, trying to find the answers before everyone else. Because of this, the past two years have been rather trying for Star Wars fans who just want to enjoy the story. YouTube, Reddit, and other blogs have attempted to answer questions brought up by fans after they viewed  The Force Awakens , and frankly at this point it's gotten old. Do we even want answers anymore? However, amidst all the garbage theories there are a few fun ones that have popped up. It's likely that all of them aren't even close to the actual plot of the trilogy. But it's cool to let the imagination soar every once in a while.  Here are some of my favorite theories that are floating around.  Kylo Ren is a double agent.  You know the person in movies who just seems like a horrible person. They do terrible, unforgivable things. But then in the end, it turns out they were
Post a Comment
Read more 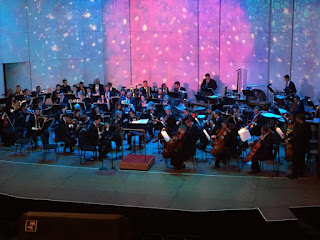 Last week I teased a fun post that was coming up. This week I can tell you that I attended not just two  concerts featuring the music of Star Wars within the course of a week! In August I was browsing online and found out that the Ann Arbor Symphony Orchestra was featuring a weekend of Star Wars music. That lined up with my Fall Break, which meant I wouldn't have anything going on at church or school and could spend the weekend at my parents' home. I am very used to doing things like this by myself, but I didn't have to this time! I invited my parents to come along with me, since I was going to be hanging out at home anyway. I paid for their tickets - I wouldn't say I was "dragging" them along, but I know that they probably wouldn't do something like this if I hadn't asked them to come. Meanwhile, the Kalamazoo Symphony Orchestra (KSO) is a top orchestra, and actually won a bid to show  A New Hope   on the big screen while allowing the orche
Post a Comment
Read more

In cinematic history, there is no one in my book that can top the soundtracks of one John Williams. His scores for movies in Star Wars, Harry Potter, Jaws , Jurassic Park , E.T., and more are some of the best, and work really well with the movie material. To my sheer delight, I was able to snag a ticket to see John Williams in person  as he comes to Chicago in April for a weekend of concerts. I cannot imagine how this will sound (especially because I got a pretty great seat), and I will be sure to share my experience when it happens. I have written an article on my personal ranking of the best John Williams Star Wars soundtracks. This time around, I am going to pick out the essential tracks that fully en capture the wonderful marriage of John Williams and Star Wars! "Duel of the Fates" The Phantom Menace "Battle of the Heroes" Revenge of the Sith While "Duel of the Fates" is a sign of impending doom, "Battle of the Heroes"
Post a Comment
Read more
More posts