When I say, "Kiss and Cry," do you know which sport I am referencing?

If you have some small understanding of the Winter Olympics, then you'd definitely say, "figure skating!"

And you would be right! Figure skating has a designated area affectionately called the "kiss and cry" area where the skaters receive their scores from the judges. It's basically called that because most skaters there blow kisses to the camera and cry because they're happy or sad about the scores.

Fun fact: the Puffs tissue company has sponsored this area for many years when it comes to U.S. national competitions - so it basically is begging people to know that these people blow their snot into Puffs when they cry - why shouldn't you?

Your answer would also be wrong! Be honest - what sport doesn't have a kiss and cry? Just because figure skating has a cute little area in their venue doesn't mean it's the only one where kissing and crying happens.

When athletes have poured their heart and soul into their sport, one of the first reactions - winners or not - is to cry. The focus has been so tight, the distractions have been so minimal, and all aspects of life have been so geared up that when the goal is achieved, all the emotions pour out. And usually that's with tears.

I've seen tears all over the place over the past ten (ten?!) days of the Winter Olympics. When Mikaela Shiffrin won her gold in giant slalom, there was no "kiss and cry" area. So she had to just curl up in a ball on the ground and cry.

When South Korea's Lee Sang-Hwa won a silver medal in the 500m speed skating event a few days ago, she seemed inconsolable as she skated around the arena with her flag. Her source of comfort was her competitor, Japan's Nao Kodaira, who had taken the gold.

Team events and relays are fortunate enough to have teammates with which you can share the joy or pain. A team like the Norwegian ski jumping crew can console each other when they gain that glorious gold medal.

Crying doesn't apply to victories - most of the time it applies to defeat. Maddie Bowman didn't put down a clean run in the ski halfpipe competition - she crashed in all three runs on her final jump. She was crying buckets when she came to the bottom and just wanted to get out of there. Some crying just needs to be done in private.

Then again, sometimes everyone is your friend when it comes to tears. Shaun White was basically hugging everyone as he cried after his win in the snowboard halfipipe.

Seeing these athletes break down in tears is a very humanizing moment, and it allows us as the audience to see how much was put into this Olympic journey. We only see the finished product, but it's been years and years of blood, sweat, and...appropriately...tears!

Here are some pictures of the decorations I've put up in my classroom. I took these early on during the Olympics, so my American medal count is updated. (Though there aren't very many new additions from this, to be honest.) 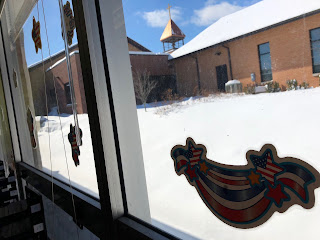 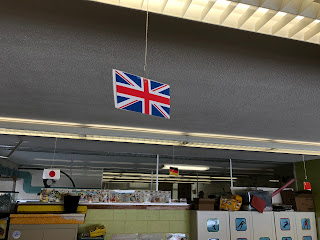 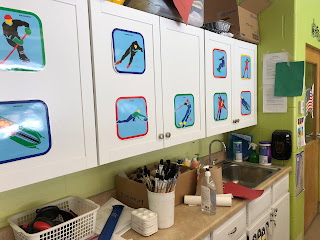 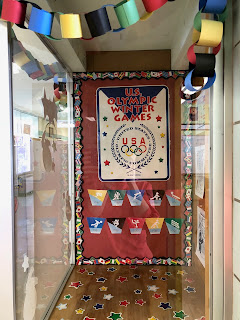 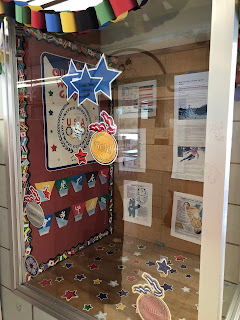 
Tomorrow promises a lot of awesome events. The women's 2-man (2-man? 2-person?) bobsled starts in the morning (my kids are going to be thrilled!), and then there is the mixed biathlon relay, too! Two men and two women per country ski and shoot. That has shot up to priority-watch as I get ready for school in the morning. (If you're reading this in time, it starts at 6:15 on the live stream and you really should watch biathlon come on now!)