The third and final weekend of the 2018 Winter Olympics is nigh, and my brain and heart are not ready.

My body, however, is pretty excited.

With two weeks of nonstop action, the body is bound to tire even when the brain is saying, "I love breaking down these routines and calculating scores!" and the heart is begging, "More Olympics - I love this stuff!"

It doesn't help that these Olympics (and the next two) are on the other side of the world, resulting in late nights or early mornings, depending on what you want to watch.

One of my students asked me yesterday, "So you just go home and watch the Olympics every day?" And I responded, "Yup!" But it did make me realize that not that many people suffer from Olympic fatigue because they watch far fewer events than me.

As I mentioned last night, I went to bed at a normal time last night and planned on watching my DVRed recording of the USA-Canada women's hockey gold medal match in the morning before work. I fully planned on doing that...until I woke up and went on the NBC Sports app to watch some other stuff while I got ready, only to have the entire plan fall apart when the front page of the app declared Team USA as the gold medalists and winner of the game. 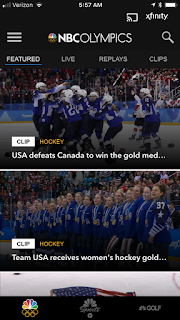 Well, so much for that. But it turns out that my DVR has been really messed up lately and doesn't let me fast-forward, so I guess it didn't matter too much anyway.

Am I still bummed that I didn't stay up to watch it? A little. But I was also wide awake and much more capable of teaching today than I might have been if I'd stayed up to watch the whole game.

Thankfully, I only have one more day of teaching during these Olympics, and then I can give myself a little more time to enjoy the Olympics and less time worrying about being work-awake!

My kids did a technology assignment with Google Classroom and filled out some information about what they've learned during the Olympics. The kids love Chloe Kim and Shaun White and enjoy watching snowboard and bobsled. I did have some fun unique answers - one girl said her favorite athletes were Aliona Savchenko and Bruno Massot from German pairs figure skating, and another said Jessie Diggins!

The kids also were supposed to write about something non-Olympic related that we talked about in Social Studies the past two weeks. Some talked about maps and latitude and longitude, while others wrote about the North Korea/South Korea split and differences.

Two notes made me think a little bit. One child said something they learned was "Not everyone gets a medal." In a world where kids get participation trophies and medals when they play in a local sports league, it takes a bit to realize that doesn't apply when you become an adult.

The other note wasn't the first thing this child had written, but I encouraged him to come up with something a little different. What he came up with as his second choice was much more poignant: "It [the Olympics] brings peace by bringing people together to have fun."

Out of the mouths of babes, amirite?

Anyway, I printed out their writing, had them mount it on 5-ring-color paper (we don't limit ourselves to red, white, and blue in our classroom) and put them up in the hallway. I'm glad I got them up today so that people can read them tomorrow and Sunday (at church) while the Olympics are still happening! 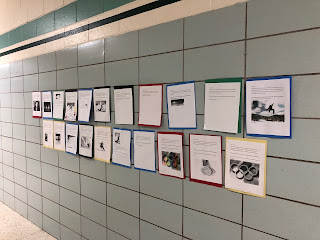 
Today might be a little lighter, but tomorrow brings bobsled, big air, parallel giant slalom snowboard, and the premiere of the alpine skiing team event which makes me so excited!