As I watch this first full day of Winter Olympic coverage, I have noticed a change in myself. There used to be events that I would make top priority that are no longer important, and others that I used to think were dull that now I consider must-watch!

One discipline that has become less interesting has been short-track speed skating. I discovered the event back in 2002 after years of casually watching long-track, with its very organized rounds and two-people-per-race outline. I was fascinated that so many people could fit onto such a tiny track!

Not only was the idea of a short track appealing, the crashes were spectacular! There was so much bumping and jostling going on that it was an abnormality when there wasn't a crash of some sort!

It helped that one of my favorite Olympians, Apolo Anton Ohno, was a short track specialist. He failed spectacularly in one of the 2002 races - one where the Australian in the back of the pack ended up winning gold because all of the competitors up front crashed - but won gold outright in 2006. (He also won gold in 2002 but it was because the person in front of him was disqualified.)

After Ohno retired, I found it harder and harder to watch short-track. The judge reviews of the race sometimes take longer than the race itself! The crashes have resulted in more groans from me than cheers because I hate seeing someone get taken out of a race in such a way. The camera work also makes it difficult to watch, because they don't show the entire track all the time. Sometimes crazy thing happen, but the audience watching at home can't see it!

Biathlon is an event that the television coverage has helped greatly. It is able to cover several areas of the course while also targeting (pun intended) the shooting area of the track.

Biathlon combines cross-country skiing and shooting from both the prone and standing position. Each time you shoot, you shoot five targets. If you miss one target, that means you need to do one loop in the penalty track. Five misses? Five laps! Fastest person wins.

It might not seem too difficult, but remember that the shooting takes place during the cross-country course, so they are breathing heavily and very tired. Plus, the targets are only about 4-12 cm in length!

I admire the technique and the skill needed to compete in biathlon. I grew to appreciate it even more in 2010, when the biathlon events took place right after school and I ended up prepping for the next day with biathlon on the television all the time!

It might not be on your radar, but try to find some biathlon events over the next few weeks. They're not long events, but always exciting!

I did not have school yesterday because we were in the middle of a winter storm. However, at my part was one of my students with her family. We were watching some curling before the NBC broadcast of the Opening Ceremony, and one of the teams placed the stone about two yards away from the target. One of the people said, "Aw, that was a terrible throw."

My student replied, "No, they put it there to block the other team's stone!" which is what I had said yesterday!

She got a high-five for showing she was listening. (She also remembered what I'd said about the OAR!) 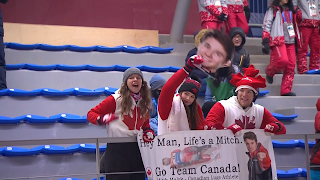 I think I'm going to call it a night! What was your highlight of Day 1 (/2)? What are you looking forward to the most come tomorrow? Is anyone planning an all-nighter later in the Olympics? See you tomorrow!