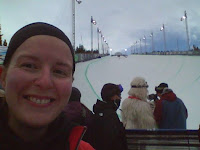 I was experiencing my first season as a season passholder to the Breckenridge ski resort. My cousins owned a condo and invited me to use it whenever I wanted. When I would visit and they were in town, they would teach me how to ski, and I appreciate their generosity to this day!

On this particular Saturday I was driving over insanely early to avoid the normal crowds that invade I-70 after 6:00 a.m. I had two purposes for this trip: enjoy the lovely snowpack and try to catch some of the Dew Tour coverage that would be on the mountain.

I was still relatively new to Breckenridge, but it was clear that there were a few more people hanging around than usual. I wasn't sure who would be performing in the halfpipe events, but I knew I wanted to see it in person anyway!

One athlete I realized right away: Kelly Clark, gold medalist in the halfpipe at the 2002 Winter Olympics and bronze in both 2010 and 2014. Clark was the first person I followed when I watched the halfpipe for the first time, and it was amazing to get to see her!

I recognized a few other names, too: Arielle Gold, Hannah Teter, and Chloe Kim! I had heard a lot about Kim, but not because of her work in the Winter Olympics. She was actually too young to compete, but there were rumblings that she was really, really good.

The competition did not disappoint, and I was thrilled to see Clark win, with Kim taking second and Gold in third. There weren't too many people at the base of the halfpipe, so I actually made it right up to the front where the athletes were waving to the NBC camera and the Dew Tour sasquatch was entertaining people. My parents even spotted me a couple of times on the broadcast!

I thoroughly enjoyed my experience at a professional event like the halfpipe. It took me a little bit to actually get there - I had to take a ski lift up the mountain, ski down to the entrance, park my skis, and walk in my ski boots to the site. (Ski boots aren't meant for normal walking, in case you're curious.) But once I was there, I was enthralled. At the time, it seemed like the closest I would ever get to an Olympic event!

Fun fact: the halfpipe looks like it's level, but it is incredibly steep going down the hill! I mean, that makes perfect sense, but with the camera angles it almost looks like it's a level halfpipe like in skateboarding. (It's not.)

I still find it hard to comprehend that I've been able to see Clark, Kim, and Gold all in person. While there are a lot more snowboard competitions in the Olympics now, I will always have a special place in my heart for the halfpipe which came before all of them thanks to my amazing experience!

The kids each picked a country that they would follow through these Olympics today. I didn't tell them why they were picking countries until they had all picked. Some of them already are racking up the points, but I made sure to pick countries that were already projected to get at least two or three medals in some event.

Three countries were not included in my list: the United States, which I thought might be kind of unfair since the kids were already going to be rooting for Team USA; South Korea because I knew the medal count always bumps up with the home country; and the OAR, because we'd had lengthy discussions on the Russian cheating scandal and I didn't think any of the kids would be too keen to support that country.

A bit shorter of a Mini Blurb today, but it was a full day of school plus more tomorrow! Looking forward to more halfpipe tomorrow!