Today, we finally said goodbye to PyeongChang as the Paralympics came to a close and the flame was extinguished once again. (At least, they tried to extinguish it. The thing kept trying to start up again!)

While the Olympians from Team USA may have had a lackluster Winter Games compared to previous years according to the media, you couldn't say the same thing about the Team USA Paralympians. They had a total of 36 medals - a whopping 12 more than the second place team of the NPA. (AKA Russia.) Thirteen of those medals were gold, while the NPA and Canada followed up with eight.

Many people got excited last night over Michigan's last-second win over Houston in the NCAA Tournament. Personally, I don't think it should have gotten to where a last-second three pointer was even necessary! So my highlight of the night was Team USA's win over Canada in the sledge hockey gold medal match.

Canada scored in the first period, and then it was a defensive battle the rest of the way. Team USA must have felt a little out of sorts because they'd won their previous four Paralympic matches by a combined total of 38-1!

It did honestly look like it was all over with one minute remaining. Just like in standing hockey, you can pull your goalie for an extra man, and that's what Team USA did. I don't see it work too often, but it did here! Declan Farmer pulled off a goal with 36 seconds left in the match and sent it to sudden-death overtime, where Farmer scored once again to seal gold for Team USA.

Honestly, it was way more exciting than the Michigan basketball game probably was. (By the way, Mom and Dad: I DVRed the sledge hockey gold medal match for you so you can watch it when you get home and see how cool sledge hockey is. You're welcome.)

I've had a crazy couple of weeks, so I'll be catching up on the Paralympic events for a while yet. One thing I haven't been able to see is snowboarding, so I'm looking forward to checking that out.

I'm just going to spend my last paragraph here mentioning how amazing the OBS English commentators have been the past Olympics and Paralympics. One of them has an Australian accent and was nothing short of stellar. He gave information without being pushy about it, and kept things light. I wish he could commentate everything!

Have you checked out the mascots for the 2020 Olympics and Paralympics? They narrowed it down to three pairs and then let the schoolchildren of Japan vote for the winners! 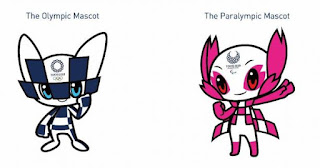 I prefer these two over the other choices, and I love the anime-style. It fits so well! I look forward to seeing these two in action - in giant mascot and tiny plushy forms!

No Mini-Blurbs this week! Next week is the Gymnastics World Cup and the Figure Skating World Championships, so there's no rest for us viewers!