Olympic Blurb: The Boys in the Boat Book Review and Weekly Wrap-Up

Last week we started a review series that allows me to read and watch books and movies revolved around the Olympics. This was mostly done because I am interested in expanding my knowledge of the Olympic Games. But another reason to do this is because sometimes I just don't have a lot of time to watch sports!

This week is Spring Break at my school, and I proceeded to leave home for the week and travel out east, primarily visiting Pittsburgh and Washington, D.C. Because I was gone - and my sports watching was at the mercy of my brother and sister - I didn't have a chance to watch too many events this week. However, since I drove all over the place, I had a chance to listen to a book on the Audible app.

*Note: so many YouTube channels and podcasts are sponsored by Audible, and you bet I was using one of those free credits to support one of them - though I can't remember which off the top of my head. You should support your favorites, too!*

The choice for my trip was The Boys in the Boat: Nine Americans and their Epic Quest for Gold at the 1936 Berlin Olympics by Daniel James Brown. To be honest, I just typed in "Olympics" in the Audible search bar and this was the first one to come up. But it also was highly rated, and anything concerning the 1936 Olympics is bound to be a pageturner. (Or, in my case, an earworm.)

The story is about rowers from the University of Washington as they compete in the United States in the college circuit, and eventually secure a chance to compete at the Olympics in 1936. The bulk of the story centers around oarsman Joe Rantz, who had an incredibly depressing childhood on his way to attending the University of Washington. As his tale is unraveled and other key players come to play, their backstories are also included. Those players would include head rowing coach Al Ulbrickson, shell-maker George Pocock, father Harry Rantz, girlfriend (and future wife) Joyce Simdars, stepmother Thula Rantz, and teammates Don Hume, George Hunt, Jim McMillin, John White, Gordon Adam, Charlie Day, Bobby Moch, and Roger Morris. 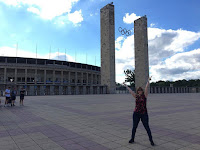 While the story unfolds out of Washington, a secondary story is also being built up in Germany, where Minister of Propaganda Joseph Goebbels and filmmaker Leni Riefenstahl are doing their part to assist Adolf Hitler and create an Olympic spectacle that will promote the Nazi regime in the eyes of the world and hide all the terrible things the Nazis were really doing at the time. 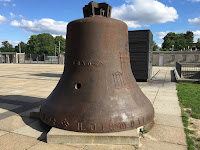 Part of this included the construction of the new Olympic stadium, which I had the chance to visit last year. Hearing about it in this context made the visit I took even more compelling. The bell they talked about? I saw it. (The Nazi emblem is still visible on it.) The cauldron? I pretended to light it. Adolf Hitler's name can't be found anywhere in the stadium, but guess whose name is prominently featured? Jesse Owens.

Back to the boys in the boat. While there are interludes in Germany, much of the book takes place before the '36 Olympics, and I can understand the reasoning. Rantz' freshman class was one of the best, and Ulbrickson needed to build a strong crew out of those boys and the boys in the class behind. If we started the book in Berlin in August of 1936, all of that buildup and camraderie would have been lost, or only briefly mentioned.

Not only is the buildup of the crew important, but also the views into Depression-era Washington and Seattle, which was still a ways off from becoming a major city in the eyes of the world. Rantz and two of his crewmates actually spent one summer in a Roosevelt-instituted works program helping build the Grand Coulee Dam. Many families of crew members had either lost their jobs or had moved to find better work. None of the boys were well off, like so many of the crewmen on the east coast.

Two other Regattas are mentioned each year that is covered: the Pacific Regatta between Washington and the University of California - Berkeley and the national championships in Poughkeepsie, New York. It is fascinating how rowing had such a passionate following, where nowadays it is relegated to Olympic years for most people. As a matter of fact, Olympic rowing was considered the second-most popular sport to track and field. Hitler himself was present at the eights medal competition on the Langer See - but quickly left after the United States secured gold and the Germans merely took bronze.

The entire book was enjoyable to listen to. Brown easily places the reader or listener in the setting by his flowing language, so it's easy to understand what is happening. Each race that is covered is presented in easy-to-understand language, and any new rowing terms that people may not know are explained earlier in the book. Bonus: because I listened to the book I now know how to pronounce "coxswain"! (It's cock-son, if you're curious.)

I highly recommend that any Olympic fan - or a fan of history, for that matter - pick up this book or download the audio (read amazingly by Edward Hermann of Gilmore Girls fame). While there is a PBS documentary about this same event, I can't recommend it simply because I haven't watched it yet! (Don't worry - I plan to in the future.) The 1936 Olympics can be understood on many more levels, and I like to think this book does a good job giving us another level of those Games. 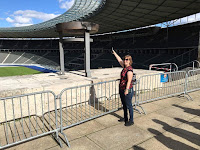 It also makes me think about things that were introduced by the Nazis in these Olympics that are continued to this day. The torch relay and cauldron lighting? That processional started in Berlin. The professional attempts to make the host city look like the perfect city and promote it in a positive light? While it was done to a point elsewhere, it was executed to the max in Berlin.

How more powerful, then, that nine working-class college students from Washington state came through and helped throw a bit of a wrench into Hitler's perfect Olympic plan. 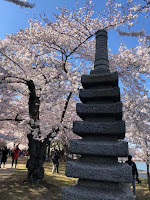 Because I'm a teacher, traveling to Japan to view the sakura is nearly impossible, but luckily in 1912 the mayor of Tokyo presented Washington, D.C. with 3000 cherry blossoms as a token of goodwill between the two cities. Since the weather has been so cold, the blossoms bloomed late this year - right in time for my visit to D.C. to visit my brother and his family! Pictures honestly don't do them justice.

Aaaaand one more shot of the sakura just because! Until next week! 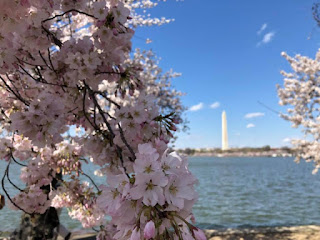