I was wrapping up my writing of last week's Olympic Blurb when something came across my Twitter feed from my favorite Olympic podcast, Olympic Fever: 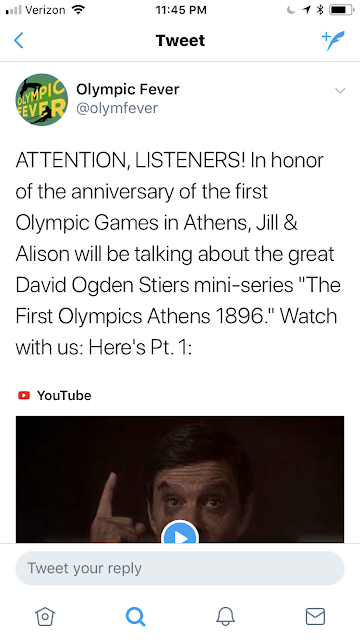 After I saw that, I knew what the subject of this week's Blurb would be!

On Monday I sat down to watch Part 1 (and you should click here just to hear the fabulous opening credits score) and finished on Part 2, and I was so excited to watch!

When I first began to watch, I was expecting to see a documentary narrated by David Ogden Stiers. That was okay; I'm used to Olympic documentaries. But then the opening credits began, and I excitedly realized this was a TV movie from the 1980s! Those are my favorite kind of movies! Somehow the film style of the early 1980s combined with the historical costumes and design make for the perfect movie in my books. It's probably why I adore such movies as Hoosiers, Chariots of Fire (which will need to make an appearance in my Olympic Film Festival soon), and The Man from Snowy River.

I chose to write this review before listening to Olympic Fever's podcast about it, and if you'd like to hear their take - plus some fun bonus content revolving around James Conolly's Olympic collection that's in Boston and the United States' choice of national anthem for 1896 - you can find it if you click here!

The movie itself is a 2-part story that mainly revolves around the announcement of the first modern Olympic games in Athens, Greece, and the United States' movement to send a team halfway around the world to compete. There are two other storylines that revolve around an Australian runner, Edwin Flack, and the first gold medalist in the marathon, Greek soldier Spyridon Louis, but a majority of time is spent on the American college students that are encouraged to join the team by Doctor William Sloane.

It is fascinating to see these men as they develop their skills without observing others. The boys from Princeton had to make their shot put and discus equipment based on the Greek artwork they saw in books! (As a result, the discus was way too big!) Finesse was not something that every athlete had, and it's interesting to realize that these athletic events weren't commonplace even 150 years ago! (Most people were just trying to survive, to be honest.)

The events in Athens were really shortened in order to fit them in the time frame - we only saw single attempts instead of the several rounds that they actually had. For the interest of dumb Americans, they inserted some Americans into events that they weren't actually in! (I'm looking at you, 800 meters.)

But I have to say that the biggest omission this movie had was the exclusion of Baron Pierre de Coubertin's mustache! The man that played him did a great job, but to not have that signature mustache was absolutely criminal. I couldn't let that go.

Even with those negative points, I enjoyed a lot of this movie. The score, composed by Bruce Broughton, fit the movie perfectly, and I would like the opening credits music to be included in NBC Olympic broadcast coverage from now on. Here - if you didn't listen to it yet, you can do it now. (I love it that much!) Bonus - the opening credits include the posters of the Olympics that have taken place!

When someone says "Olympics," it is easy to think of those early Greek games that are displayed on pottery and include naked dudes. But the first modern Olympics took place in the Victorian era - not that long ago! It was a time when sports and world competitions were brand new ideas, and everything had a little more of a refined nature to them because rich people were a refined sort.

Sports modernized and became more inclusive, but it is always good to see how things first came about. If anything, it's a great opportunity to thank those - like de Coubertin - for having this idea and executing it so well that it's become an enduring world-class event! I think the movie pulled that off very well.

Even if historical movies made in the 1980s aren't your think, please take a couple of nights and enjoy this. Remember the Hollywood additions, but also keep in mind the spirit of the movie - a chance to show us all just how far these Olympic Games have gone!

We also have a theme to the torch relay (which I guess is a thing...) called "Hope Lights Our Way." The flame will visit all the Japanese prefectures and spend significant time in the areas affected by the 2011 earthquake and tsunami.

Mini Blurbs
Tomorrow is a big event: the Boston Marathon! I was not one of those in America who got a foot of snow this weekend and I will still have school tomorrow, but I have started to make the Boston Marathon a must-DVR event and I'll make sure to write about it after I've gotten the chance to watch it.

Next Sunday's Blurb will be all about the Olympic Channel YouTube page, which has been really killing it as of late. I'll talk about reasons why you should definitely subscribe if you are an Olympics fan!