It is very easy nowadays to get sucked into a hole of YouTube videos. One video watched leads to YouTube suggesting more like it, which are also watched, then one moment of whimsy leads into the giant realm known as "Cat Videos," and suddenly it's been four hours.

I may have finally gotten the hang of YouTube after finally realizing that my subscriptions have their own feed and I don't have to constantly be scrolling through highlights from The Tonight Show Starring Jimmy Fallon or conspiracy theories about how Star Wars is ruined because of this one big flaw! Now I can just watch what I want to watch.

One of those subscriptions was made to several Olympic YouTube channels - the Team USA channel and the Olympic Channel...channel. I subscribed to both of them during the Olympics, hoping for some nice highlights of past Olympics and athlete bios.

The Team USA YouTube channel is pretty terrible. Immediately after the PyeongChang Olympics they posted 20 videos at the same time, but each of them were just 30-60 second interviews of athletes. This happened for several days, and it got kind of obnoxious to see my feed inundated with mini interviews. A couple of weeks afterwards they stopped and haven't posted very much since.

However, the past two months on the Olympic Channel feed has been really awesome. The actual television channel recently picked up a few more sports to broadcast, which include kickboxing, sambo, and squash, increasing their broadcasting load to 67 federations. Because of this, some of their original programming gets less screen time on TV. In addition, the Olympic Channel is on a pretty high level of packaging for cable subscribers, so not as many fans get a chance to watch the shows on the channel.

To help get their content out, the YouTube channel provides videos of about 3-10 minutes that consolidate the episodes of their television shows so that people can watch them and enjoy. Some are cute "did you know?" videos while others are profile pieces.

Not only does the Olympic Channel provide television content, it also shows highlights of Olympic events - usually recent Olympics, but sometimes they reach into their back pocket and produce something fun from 20-30 years ago.

One of my favorite series is the "Strangest Moments" feed. There have been lots of crazy things happening during the Olympics, and sometimes it's hard to believe!


I also like the athlete profiles, like this one on Joseph Schooling, who beat Michael Phelps in competition at the Rio Olympics:


And sometimes it's just the weird stuff.


I appreciate how they post regularly, but don't inundate the YouTube feed with twenty videos at once. All the videos I've watched have been very well produced and give a lot of great information!

The next time you are bored and scrolling through YouTube, type "Olympic Channel" into the search bar. You might just stay there for four hours and never watch one cat video!

Aside from two marathons, it was a pretty light week of Olympic sports, so I watched five different Olympic Opening Ceremonies: Atlanta, Sydney, Salt Lake City, Athens, and Torino. It made me realize two things:

1) I really want to take part in the Los Angeles Opening Ceremony. I don't have to be a dancer or anything, but there seems to be a lot of people that just run and stand as hundreds of people create some amazing image. I could totally do that! My top Opening Ceremony role of choice would definitely be the shuffle dancers that line the route for the Parade of Nations. I can shuffle dance! I can dance in one place for three hours! Put me in, coach!

2) Participating in an Opening Ceremony might be a ridiculous pipe dream (see 1) but I really, really, reallyreally want to go to the Tokyo Opening Ceremony. It would be a dream come true. I would never be able to afford a ticket, but I love all the pageantry of all the Opening Ceremonies and just want to be there and cry in front of everybody as something happens. I can imagine people staring at me as I blubber, "Look! They're making a dove! The Olympic Charter says they have to have doves!"


I'll just close this week's blog with a tweet showing the next big event for which I am gearing up. Until next Sunday! 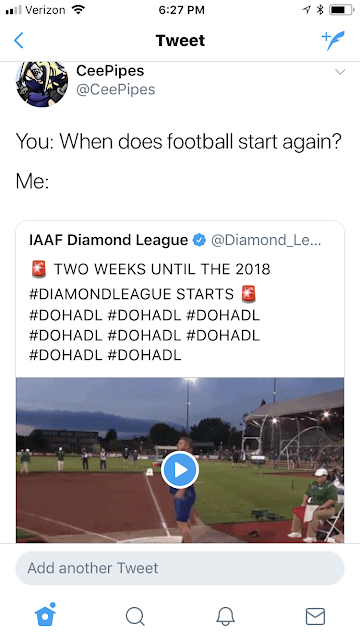