It is often said that an idea is stupid when it's first introduced.

Automobiles? Stupid. (Get a horse!)

Eventually those ideas are integrated into mainstream culture and people don't designate them any longer as "stupid."

I was one of those people that thought fitness trackers were stupid. Why would you need all that information? Those things are for people who are obsessed with fitness - not me! You wear it at night? How obnoxious that must be!

Then I started gaining weight.

If you've been a longtime follower of the blog, then you know I have done a lot of running. That really helped me shed some pounds and inches in recent years. Unfortunately, I stopped running and ate more than I should have. Even though I continued walking and doing workouts, my calories consumed didn't even out with the calories I needed to burn.

I noticed this especially at the start of 2018. I tried to put more into my fitness regimen, but it didn't seem to work. After a visit to the doctor and a look at my BMI and how close it was to the "obese" category, I decided a major change was necessary.

My remaining funds in my budget are currently being reserved for my summer classes and Tokyo 2020 trip, so investing in a large gym membership wasn't in the cards. Running would need to come back to the forefront, but there was more that I was going to have to do.

Last week was my birthday, and I got some money as a present from my parents (which they don't need to do, but insist on doing every year, and I love them for it). I had noticed in a recent trip home that my sister was using the My Fitness Pal app, and I asked her if she liked it. She said she did, and it had helped her out. 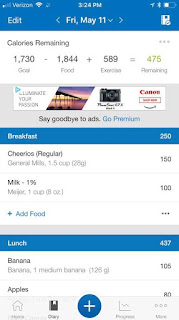 All of these things were rumbling around in my head (and the money was burning a hole in my pocket), so I put it all together and decided that I could use the My Fitness Pal app and a fitness tracker to help me get to a goal weight.

I spent way too much time in the electronics section of my local Meijer, deliberating whether or not to put down $120 on a fancy FitBit, which I've seen many people using. I also (very, very briefly) thought of getting an AppleWatch, before the pricetag (and its bulky design) made me say no.

Then I glanced over and noticed a sale item. The UnderArmour Record band was on sale for half price - originally $120, but now only $60! I checked my phone and saw that they were discontinuing the bands but continuing the software, so that was why it was cheaper than the rest. If you're unaware, UnderArmour is the main company behind the My Fitness Pal app, so the band would sync with the app on my phone. I bought it! 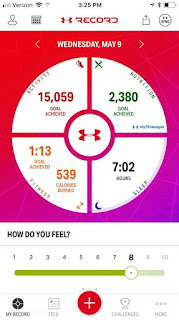 Once I put my mind to a goal, it's hard for me to stop. So as soon as I had the My Fitness Pal and UA Record apps on my phone, I got started logging in my food intake and counting steps.

Yes, I started feeling like one of the people I rolled my eyes at when they mentioned their step counts for the day. But sometimes you have to avoid ignorance and see the benefits.

Over this first week, I have noticed a big change. My sleep habits are pretty good, but my food intake was atrocious. I looked for ways to lower my calorie count and find snacks that were healthy, too. I also started carrying my Contigo waterbottle with me everywhere as I increased how much water I drank. My band kept track of steps and also could log my workouts, and that information transferred over to the My Fitness Pal app so that it could adjust my caloric intake for the day.

I've kept pretty close to my calorie requirements, though it was hard on Monday because Teacher Appreciation Week began (donuts from a local group in the staff room) and the room moms celebrated my birthday (4 dozen cookies and ice cream for me and the kids), but I stayed strong. I ate only what I knew was worthwhile and didn't snack on a bunch of cookies after school, even though I really wanted to. 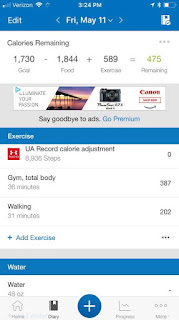 I'm curious how this will work with dining out, which I've done only once so far. The app is definitely going to show that some places have thousands of calories for certain food items, and I'm just going to have to learn to enjoy sparingly or not get those items at all!

The step count and workout log has been cool to use. Today, for example, I hit my step goal before 12:30 because I did some major workouts in the morning, and I walked to the store instead of taking my car!

Will it result in weight loss and inches trimmed? I certainly hope so, but I don't expect to see results immediately. Will I be able to enroll in the Next Olympic Hopeful thing that 24 Hour Fitness and Team USA put together? Definitely not. But I'll feel good, and that is all I can hope for!

Thanks for letting me personally indulge you. Now let's get back to the Olympics!

I saw some websites that suggested waiting until closer to the Olympics to purchase airline tickets and hotel rooms. Man, I am not that patient. I'd spend all that time freaking out that everything is going to be sold out!

It does seem like Tokyo is going to be a very popular destination for American tourists in 2020, as opposed to Rio de Janeiro or PyeongChang. That alone will make me purchase things way earlier than I need to. Patience, Claire! Patience!