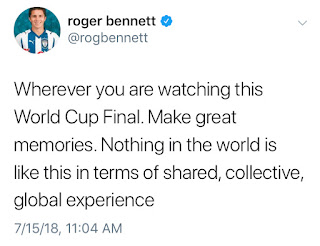 Today, if you weren't aware, was the World Cup Final between France and Croatia. France won, 4-2. Millions of people watched the tournament over the past month.

But really? "NOTHING IN THE WORLD is like this?"

I might write an Olympic blog, but even if I didn't, I feel like the Olympic Games are more of a uniting experience than the World Cup. The World Cup is one sport: soccer/football - whatever you call it. One country wins the title. And that's it! This past week there were four games: two semifinal matches, one third place match, and one final. The other three days, nothing happened.

Take a look at the Olympics. Two weeks crammed full of all kinds of sports - including football. You don't like football? Fine. Over here they're doing shooting! Over here is swimming! Over here is table tennis!

Is your team not very good at football? Not a problem - they're probably good at something else. Kenya and Ethiopia are premier long distance runners. Australia has fantastic swimmers. China is number one when it comes to divers. Brazil dominates in volleyball - beach and indoor.

Each day has so many events that it's almost impossible to watch it all - and you'll probably get sick if you try. Even when gold medal events are taking one day of rest, there's probably another sport doing their gold medal match.

I won't try to compare FIFA to the IOC - both have had issues in the past with bribery, corruption, and doping. It wouldn't be fair to say that one is "better" than the other.

I will concede that football is the most popular sport in the world. But uniting a world, in my opinion, is done the best by the Olympic Games. Any recreational sport enjoyed around the world is enjoyed in the Olympics. And while people will tune into the World Cup to watch the teams playing, people tune into the Olympics because they're invested in their athletes and their success!

What could be more unifying than that?

I listened to this week's edition of the podcast Olympic Fever, and they talked about how many hotel rooms are needed for people working at the Olympics - and I'm not talking about the athletes! I believe they said that the IOC needs to book over 40,000 rooms for the IOC Family (including media, marketing partners, and national Olympic committees). I know Tokyo has lots of hotel rooms, but how far away will I have to stay if the 40,000 rooms closest to the venues are going to be taken by workers at the Olympics? I did experience some panic about that.

Do capsule hotels allow 2-week stays? I'd be okay with that.

This might be due to my recent article about the Modern Pentathlon, but I loved the channel's discussion of the Tunisian modern pentathlon team from Rome in 1960. Yes indeed, if an average Olympic viewer ever thought, "I could do this!" here is evidence that no, you actually can't: