It's not often that you get to walk to the starting line of a race, but I was able to do so yesterday when I went to my hometown for their Summerfest 5K. As usual, I will recap the race while inserting the titles of music I listened to during the race.

I have been to large and small races, and this one was on the smaller side (though not the smallest I've ever ran). I'd say about 150-200 racers were present on a beautiful Saturday morning - there were not too many clouds in the sky and the humidity was low.

Over the summer I got back into running after taking almost a year off. Once I got out of graduate school I made it a habit of running four days a week. Each time I would shave time off my walking pace and add it to my running pace. (I'm a follower of the Galloway run-walk method.) By the time I got to the race, I was walking for 1:15 and running for 1:45. 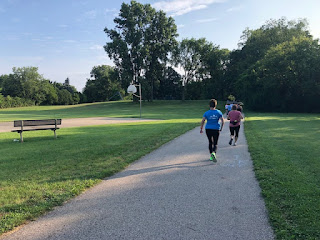 The biggest challenge of this race was the start - as always. Unlike the races I've done in the past, I actually started my pacing at a walk instead of starting with a run. It was probably the best decision I made because I didn't have to deal with any congestion at the starting line; the runners all bolted ahead of me and the walkers stayed behind me. When it was time for me to start running, I had a wide-open lane.

The route of the race was clearly meant to imitate those big races but didn't require the city to close any major roads in the area. We started down a neighborhood street by City Hall and then cut into a nearby park. The park path (a former railroad track) took us to the local library and middle school, which connected to the school about 1/4 mile away from another school by a small road. After we circled that school, we traced our steps back to City Hall. 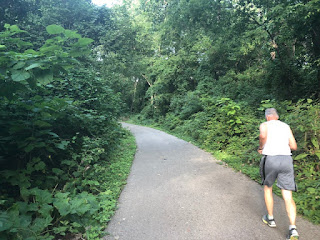 It was the second out-and-back course I'd done, and I liked it. Because we did the loop around the school, the majority of the runners that would have been passing me on their way back ended up heading back while I was still in the loop.

There were runners that started out at the pace of the rest of that initial crowd, and then faded back as they slowed their pace. Those were my prey. I would pinpoint people that were starting to shuffle or walk, and made it a point to focus on passing them. Even though I was doing the run-walk, I didn't have a whole lot of back-and-forth with me passing, then them passing, then me, and so on. Instead, I would pass them and then ended up surprised when I didn't see them again!

I love road running, and there were a couple of times when neighbors drove their cars down the street as we were running. That was a bit frustrating, and I wish the road had been more clearly marked to show where the cars might be and where the runners should be. We runners had seen that the finish line was marked on the left side of the street, which was lucky, because the cars were driving down the right side. Chalk marks? Orange cones? Something? This is the second race where I've been running with cars, and I'm not a fan. 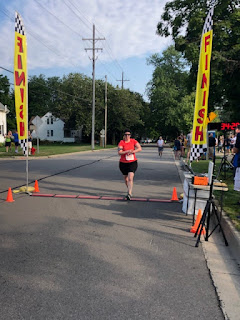 My fitness tracker might not be a huge judge of mileage, but when I punched my watch at the finish line, it actually said that I'd gone 3.2 miles instead of just 3.1. What really surprised me was my time! This past week I copied a swimmer's method and did "taper time" where I wasn't running at full pace after Monday. I didn't even go for a run after Tuesday! But the taper time was so helpful, because I PRed at 34:31. I'm not sure I've ever gone under 35 minutes before - my pace ended up being 10:48/mi! If I'm doing an 11-minute mile I'm thrilled; this was unbelievable!

It helped that I actually had a cheering crew waiting for me at the finish line. I told my parents to expect me at the finish line about 35 minutes after the race began. Luckily, they got out there a little earlier and were joined by my neighbors across the street, who I had talked to the night before about doing the race. There were lots of supportive people along the route, but it was cool to see people I knew genuinely cheering for me.

I did so well that I was very curious about my results compared to others in my age group (ages 31-35). I inched my way over to the announcements, and sure enough, I placed second in my age group! Unlike a year ago, when I was third out of three runners in my age group, I did spot a few ladies that were in their thirties this time. It might have only been five, but I still beat someone! (Unfortunately they didn't have the awards there, and they'll be mailed when they do arrive. I'm wondering if I will get a medal or not.)

The race was nice, and it was fun to do it in my hometown. The city has been full of people all weekend who are wandering the streets on their way uptown, and it makes for a buzzy atmosphere. I love that!

The channel has a great series called "Training Under Fire" where it profiles athletes who compete in the Olympics even as their country erupts around them in war. One particular video was timed perfectly, and you'll know why in a few paragraphs. Here is the video:

CoSport sent out an email to its contact list encouraging us to create an account as soon as possible because tickets for the Tokyo games were going to be in high demand. That led me to a Twitter conversation with Ken Hanscom, who also posted CoSport's memo on the social media platform. My question was concerning the CoSport packages and purchasing individual tickets. Here was his reply: 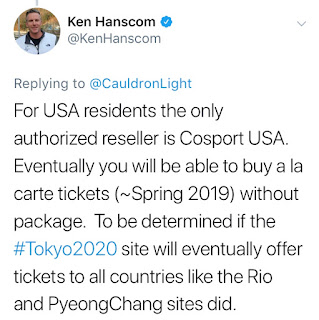 While Rio and PyeongChang did offer individual tickets on their websites, their tickets also were widely available even during the Games. Ugh. This process is so stressful!