Before 2008, I was simply a casual Olympic fan. I took notice that they were happening, watched a little bit of the Opening Ceremonies, and watched a couple of things here and there.

But in August of 2008 - ten years ago this month - several things came together that transformed me from a casual fan to a rabid fan.

The first was the fact that I myself was going to be traveling to China later that month to be a teacher in the middle of the country. Before heading there, I would have one day in Beijing itself. I knew that NBC enjoyed telling stories about the host country's life and culture, and would be very interested to hear more about China.


Like I mentioned before - I have seen Opening Ceremonies in the past, so I knew there was a cultural aspect, and then the parade of nations, and then the lighting of the cauldron. But as soon as those 2,008 drummers started yelling, I knew that this Opening Ceremony was going to be something to remember.

To this day, I don't believe that Opening Ceremony has been topped by the ones that followed. To their credit, the organizers of Vancouver 2010 and London 2012 knew they couldn't top it. The massive amount of people who all had to work as one cohesive unit in the Beijing production was seemingly insurmountable.

During the Olympics I was attending Chinese-teaching-prep seminars in Minnesota. These classes didn't really require a whole lot of homework, so my evenings were spent watching all the NBC primetime coverage (back when it was really the only way to watch some stuff). I got to watch men's and women's beach volleyball, men's volleyball, water polo, gymnastics, track and field, and all the swimming finals - remember, NBC requested that the swimming finals occur in the mornings so they could air live in the States.

I watched all of Michael Phelps' gold medal wins. To be honest, I almost turned off the TV in disgust during the men's 4x100m because the French were so far ahead at one point. But I didn't - and I was rewarded with Jason Lezak's astounding comeback and win.

There are so many storylines that I will never forget: Shawn Johnson and Nastia Liukin's clash in the women's all-around, Misty May and Kerri Walsh crushing the competition on the beach, Jonathan Horton leading the US men to an astounding bronze medal in the team gymnastics competition, two sweeps on the men's track in the 400m and 400m hurdles, and Dawn Harper's triumph in the 100m hurdles after no one on the NBC coverage gave her any airtime.

Honestly, Harper's gold medal was my favorite aside from the Phelps medals. All the coverage was given to her Team USA teammate Lolo Jones. Like, all of it. Harper was mentioned in passing as the athletes were announced, but that was it. And then Jones stumbled in the last two hurdles and Harper crossed the finish line first. And still NBC wouldn't acknowledge her, talking about Jones' heartbreaking stumble instead. It was like they were scrambling for information about Harper because they didn't bother to do any research beforehand! (I'm watching the DVD recap from 2008 that I own, and even in that recap they gave several highlights to Jones' failure and three seconds to Harper. Ridiculous.)

If you show me uniforms and medal ceremony attire for the United States, I can always tell you which ones were from 2008. The track and field team wore one of my favorite blue kits. The swimmers had stars and stripes on the famous "suits" that created so many world records. The medal ceremony attire was white with a blue V on the top. Liukin wore a pink leotard and Johnson wore red.

After these Olympics, I stuck with these athletes. I became aware of World Championships (though it was still hard to find a place to watch them). I found track and field coverage here and there. When London 2012 rolled around, I rooted hard for those athletes that I knew from four years earlier and actively searched my DVR to make sure I watched more than the Big Three of gymnastics, swimming, and athletics.

As a matter of fact, thanks to that DVR and live-streaming that started with Sochi 2014, I found it all too easy to get sucked into the Olympics. But it wouldn't have happened without the spark of Beijing 2008.

Some visa issues postponed my arrival in Beijing until September, but it didn't postpone my Olympic enthusiasm - nor the enthusiasm of my students. One of the questions I got the most often from my Chinese students was "Do you know Michael Phelps?"

I wish, students. I wish. 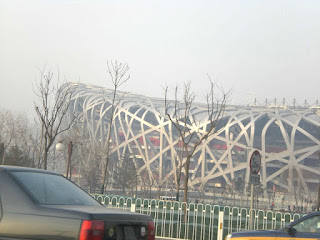 Eventually as I left China after my work was done, I caught sight of the Bird's Nest and Water Cube from the taxi that was taking me to the airport. Nowadays I would have demanded a day trip to those sites. But at the time I simply marveled at the size and scope of those two venues, and giggle at the thought that I was seeing those buildings in person when I spent so much time watching them in August.

I am certainly not a "casual" Olympic fan anymore, and Beijing 2008 was the catalyst for my fandom. If it had to be any Olympics, I'm glad it was this one.

Recently Japan has been hit with quite a heat wave, and it coincides with the same time of year when the Olympics are being held. I've learned many ways to beat the heat, but it's a lot easier to do so when there is free water and I have a refillable water bottle. How will it work when I'm in a different country?

Hopefully the Japanese organizers will make sure that something as important as water is available in the venues with little or no cost. I'd rather not resort to vending machines and strange carbonated products to try to quench my thirst!

Ever heard of Anthony Nesty? He swam for the Republic of Suriname and shocked the world in 1988!