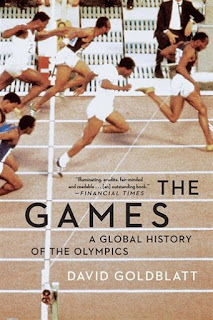 After many weeks, I finally finished The Games: A Global History of the Olympics by David Goldblatt. I kept talking about it in podcasts and blogs, but I hadn't actually finished it! You'll find as I do my review the reason why it took so long.

The Games tries to cram all of Olympic history into one very large tome. While reading it and thinking about how all-encompassing the book is trying to be, I could only think of Leia Organa talking to Grand Moff Tarkin during Star Wars: A New Hope: "The more you tighten your grip, Tarkin, the more star systems will slip through your fingers."

The book starts off modestly. We read about the formation of the ancient Greek games and Pierre de Coubertin's efforts to bring them into the twentieth century. We read all the hurdles that had to be overcome and other people's efforts to present a similar Olympic-style competition in their areas as the Olympics grew.

I found the first half of the book to be very good. It is amazing to think of how these games were meant to show the greatness of men, but really just promoted the hubris of the wealthy upper class men of Europe and other white-dominated societies. They didn't even try to hide the fact that this was a feat intended for men only!

Eventually (and thankfully) women's participation and the inclusion of people from all different corners of the world increased. With that inclusion, however, came political baggage that the IOC needed to consider. At first it was simply the dissolving of the British empire. Then it was the ramifications of The Great War. Then it was Hitler's reign and World War II. Communism. Apartheid. Which China was really China. While the games try to keep politics out, it is a very real side effect that challenges the Olympics to this day.

Goldblatt does a good job condensing the global history as it relates to the Olympics. However, when it comes to the Olympics themselves, he struggles. Barely any space is given to the men and women who competed, instead wasting paragraph after paragraph on greedy organizing committees and the constant increase of sponsors and promotion.

By the time Goldblatt gets into the late twentieth century, it's almost like he's grown more and more apathetic to the Olympics. His entire chapter on Atlanta 1996 was basically a slam to every single organizer and business sponsor. (Oh, and while no space was given to any other mascot, he found some room to insult Izzy. Just Izzy? Really?)

Since the book was released right before Rio 2016, he spent the last chapter talking about the follow up to those games. Did I say "talking about it"? I meant, "writing about all the political corruption, unstable national climate, and ill-prepared facilities." If you'd read this before departing for the Olympics, you would have had your excitement balloon deflated immediately.

The Winter Olympics are smushed in between chapters like an afterthought. While he dedicates an entire chapter to every single summer game, there are two or even three Winter competitions that are combined in a very disjointed way. There is no way a chapter could join Vancouver 2010 and Sochi 2014, but in this book they are combined.

I was hoping that the end of the book would allow for some hope for the future. He does mention Agenda 2020, but basically resigns to the fact that the Olympics have evolved into something that barely resembles its primary purpose. In short: the Olympics were terrible, currently are horrible, and will continue to be awful. Here, I'll quote him:

"Rather, the tragedy of Agenda 2020 is that, beneath the contorted language of corporate change - repositioning, benchmarking, leadership - [current IOC President Thomas] Bach and his minions are operating under the illusion that they are still part of a social movement - a force for value-driven action and goals, shielded from and antithetical to the demands of economic and politics...There are Olympians and Olympic officials, but there is no Olympic public and there are no Olympian activists...just the whirring wheels of a small but immensely connected and powerful bureaucracy."

Well, if there's no Olympic public, then who am I? What the heck am I doing? Why am I even typing this?

The basis of Goldblatt's book is that organizers of Olympics have been trying to achieve unattainable goals. With every Games there were negatives. The positives were too small to enjoy or too late to appreciate. And the cost is too much.

I can acknowledge that the Olympics have always had struggles, and a lot of the time personal gain by organizers or countries meant that the movement suffered. But I can't just read this book and accept that nothing good is being done for the Olympic movement. Work is being done. Thanks to terrible people of the past, the IOC has to regulate and sound more like a business, which can make it seem like they are very flat and unenthusiastic and uninventive. But they're not!

Best of all, those people are getting their plane tickets to Tokyo and are prepared to make this one of the most well-attended Olympics of all time.

When you tightened your grip and tried to encompass the Olympic history, the more you let the stars of the show and the wonderful memories slip through your fingers.

Like I mentioned, the Olympics used to be a competition for the rich who had the means and the time to enjoy sport. But it's rare nowadays that royalty actually is good enough to be competitive. Here's a fun video talking about some of the more recent royals from around the world: