I am a lifelong sufferer of anxiety, but just over the last month has it really started to affect my life. I was  am a miserable wreck and couldn't can't love the things that I used to love.

So my mother came over and stayed with me for a few days while I visited a doctor and got sorted out with medication. I'm seeing a counselor. I'm talking to my pastor. My coworkers know. My family knows. I'm being brutally honest with them because I want to be brutally honest with myself. I've shoved it aside for so long that it reared its ugly head in an ugly way, demanding to be heard.

My mother made me food, we talked about a lot of stuff, we watched Jack Ryan on Amazon, (which was amazing, by the way - get on it) and she was a huge help. But I did realize that she couldn't stay - I had to find ways to figure this out while living and working on my own.

Before she left, she had bought an onion and left it out on the kitchen counter. I told her, "Mom, why did you get that onion after you cooked the food?"

She shrugged and said, "I'm not sure. But you can still cut it up and freeze it for later."

So every day this week I would go to my kitchen and see that onion.

I should cut that onion.

The worst thing an anxious person can do to themselves is ruminate about what they're thinking. It just makes it worse. So I'm working on being mindful and aware of the present.

It's very, very hard. Especially when I've had 33 years of experience in anxiety.

Medication does its job, but it can't do everything. I need to place all my trust in God, my anchor, and get my brain to a sense of normalcy.

I also have to start changing my life a bit. I live in a tiny town and don't really have neighbors. Currently the building that is directly across the street from me stands vacant after being a resale shop for a few years. It's a pretty lonely building to watch every day.

I used to love getting out and being amongst people, but on my own. I loved hiking and walking - and I kind of even enjoyed shopping, when I had the money to purchase stuff. But I think that I need to be with people.

Now social media isn't an answer at all - I can talk all I want, but you'll never know fully how I'm doing. So I've been texting and calling a few more people lately. I'm looking to volunteer at a local animal shelter - animals calm me, and I can meet fellow animal lovers there. I'm even thinking of auditioning for the local community theater - not my idea; in the summer my voice teacher said I should give it a try. I can blame her.

My automatic reflex when anxiety comes is to just curl up and stare at a TV until I have to deal with the next thing. News alert: that doesn't work.

It is making me reconsider a lot of stuff, but it's strengthening my relationship with God. He's always been there for me even when I have been more focused on "career" rather than "ministry." I get frustrated with God because he's not working with me, but why should he? He's almighty and knows all, while I'm just one piece of his magnificent creation. He sees the light at the end of my trouble tunnel, even though I can't.

You know what else helps? Writing. My mom reminded me of that when I was just complaining to her that I wasn't having a very good afternoon and was thinking of just scrubbing a second straight Sunday post. She's right - writing is good. I might write a little more - we'll see. I missed quite a bit of World Championships this week (including rowing!) - not all of that was because of my anxiety; most of it was due to work.

I am currently watching Eliud Kipchoge break the marathon world record, which he did this morning in Berlin. They really set him up for success: a flat course, three pace setters going right with him, and special drinks every 5 kilometers. They were hoping it would happen in London a few months ago, but the weather didn't cooperate. Today the conditions were perfect.

Another world record that I was disappointed to miss was Kevin Mayer's decathlon points record, beating Ashton Eaton's old record. Watching decathlon on television has always been difficult - it is a very personal experience - but it's still awesome that he did it.

Watching sports helps. I had gotten sour on sports-that-weren't-Olympic, but now I'm seeing through different eyes how important this stuff is for me. Wouldn't it be nice if one of my sports teams won it all this year? (Not likely - every team in Detroit SUCKS this year.)

When I first started being Olympic-exclusive, I followed a bunch of random Olympians on Twitter. One was gold medalist Tianna Bartoletta, long jumper and sprinter. I just recognized her name and clicked follow. Little did I know that she's been going through a very tough year, but has been blogging about it. The stuff she posts about the athletics life and mental health has been very eye opening, but encouraging. There are so many athletes that suffer from anxiety but can't share it because of fear of losing that success they have; Bartoletta just said, "Screw that" and ended up becoming an even more amazing person from it. Here, sample one of her articles to see.

My mental mindset needs to calm, but my physical self needs to work. I know what I have to do; I just need to constantly - CONSTANTLY - keep myself working on it. It won't be fixed in a day. It might not even be fixed in a month. But I just have to keep working.

And if anything else...

I just need to CUT. THAT. DAMN. ONION. 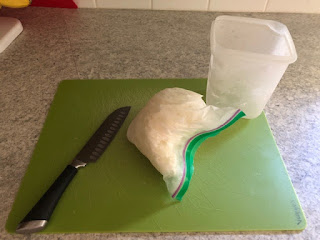 I'm Claire Nat and this was a very personal blog on my usually Olympic-centric Light The Cauldron! Follow me on Twitter and Facebook @CauldronLight and read my past Olympic articles. Mental health is not something to be taken lightly - talk to someone, listen to someone, and don't keep it to yourself.