Book Review: Running For My Life 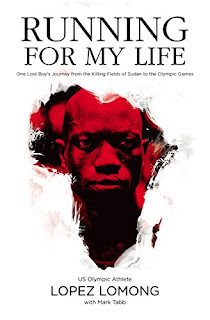 Often we hear Americans complain about "first world problems." We know that our issues aren't as bad as those who live in smaller, poorer countries, and we acknowledge it with that phrase. But let's be honest - even though we might convince ourselves that we get what they go through, we don't.

The things that I read in Lopez Lomong's book, Running for My Life: One Lost Boy's Journey from the Killing Fields of Sudan to the Olympic Games were eye opening. As a six-year-old, Lomong was taken from his parents by Sudanese soldiers in the People's Liberation Army in order to be trained as a child soldier.

The boys were stuck in one large room, ate terrible food out of one bucket, used the bathroom wherever they could, and watched as fellow boys died around them. With the help of some boys from his village, he escaped the camp and literally ran for his life to Kenya.

At the UN refugee camp, we would assume that Lomong's life drastically improved, but it took longer than that. One of the shocking aspects of this section was that on Tuesdays, the refugee boys would jump into the dump where the UN would dispose their garbage and take all the food they could fine. They ate garbage, and that was the best day of the week.

Eventually Lomong hears about a program that sends boys like him to America to be adopted, and he makes it to Syracuse, New York to be adopted by Rob and Barbara Rogers. The kind of culture shock that Lomong experienced was very different to what we're used to - he was suddenly in a huge house with all the food and drink he could have, a bedroom of his own, indoor plumbing, and multiple sets of clothing. Yet he was scared - scared that it would all suddenly get taken away and he'd be back where he started.

Lomong's story is enthralling. I read this in the span of 36 hours back in August. I started reading and I couldn't put it down! (It helped that I was still plodding my way through The Games and was excited to read a book that wasn't so dreary and documentarian.) Although I read this because it is related to the Olympics, I realized that the Olympics aspect of the story was secondary to Lomong's life.

The book was selected as the Olympic Fever Book Club book for the fall, and Jill, Alison, and I will be talking about it on this week's podcast. I would highly recommend that you pick up the book and read Lomong's story - it won't take very long! Then make sure to download the Olympic Fever podcast to hear our take. If anything, this book will give you insight into what people have dealt with in Sudan and South Sudan for many, many years.

Honestly, the I feel like I wouldn't even bother saying "first world problems" ever again. It just seems to put third world country problems into a nice, neat box - and we could all do ourselves a favor and see how real this world around us is.

In listening to a podcast centered around Japan, I heard that interviews in Japan are very formal. Japanese students who are interviewed at school do not just have a conversation with their teachers, but are grilled intensely. It makes me wonder about the interview process for volunteering at the Olympics. Should I expect something casual? Or should I prepare myself to be grilled? (It never hurts to be prepared for both.)

Marjorie Jackson is an Australian sprinter who won gold in the 100- and 200-meters in the 1952 Olympics. In her own words, we hear her story. How cool!


Bonus Video: I loved Runner's World's video from the Chicago Marathon Expo. They set up a giant treadmill and set it at Eliud Kipchoge's world record marathon pace that he ran last month in Berlin. It really makes people realize how fast these distance runners are - and they keep it up for two hours!