A few years back I lived in Wisconsin. Because I'm originally from Michigan, the transition from one Midwest state to another wasn't that big of a deal. However, there were just enough little things all over the place to remind me that I wasn't in my home state anymore. It felt like a parallel dimension; everything is the same, but everything is just a tad different.

I have that feeling as I try to watch the Youth Olympic Games that are taking place in Buenos Aires, Argentina, right now. For all intents and purposes, this is an Olympic event. The official logos and colors and designs are plastered all over the place. Athletes are wearing their countries' colors (and sometimes the exact same uniform as two years ago). Omega is still displaying the screens. There's even the same English announcers!

But it all seems different.

For one thing, I don't know anyone. Due to my constant intake of Olympics news, I am well familiar with athletes from many of the different sports. While I will know many of these athletes in the future, I have no idea who they are right now, and there are no familiar faces on which to cheer.

Talk about alternate reality: after a Winter Olympics where Russia didn't make an official appearance and a IAAF season where Russia was banned, it's crazy to see the Russian flag on the screen again.

I'm glad that it looks like the people of Argentina are enjoying themselves as these games play on. I am also glad that NBC isn't tight-fisting the broadcast of these Youth Olympics. You can go onto Youtube and find a livestream of many events right now, plus the Olympic Channel YouTube page is providing daily recaps and clips for people to watch. Twitter also provides links to events that air airing live. (And since these are in South America, they are live in the American time zone!)

But I just can't get into it! Perhaps NBC's insane promotion of the Olympic Games actually does its job: it gets me excited to watch.

I also have one more slight issue with the Youth Olympics: these are geared towards kids aged 14 to 18. I don't particularly agree with broadcasting and promoting kids that young on an international stage. That's why I avoid watching the Little League World Series, where the kids are even younger! Those kids should not worry about saying or doing the right thing on television or the Internet. They are still trying to figure out their lives, for goodness' sake!

There are only 4,000 athletes there, and even in some of the events, countries are competing together. I saw the end of the ladies' doubles final in tennis yesterday, and the winners were from two different countries: Poland and Slovenia. So when they got their gold medals, the Olympic anthem was played instead of their countries' anthems! Very strange.

I do like the "preview" of future events at the Olympics. They have sport climbing and 3x3 basketball and karate, so if someone wanted to see how it would work in 2020 they could watch. The 3x3 basketball was actually quite interesting - it's only half court and once the team scores a point, the other team just has to take it out beyond the arc and they can shoot! I think I'd rather watch 3x3 than the "real" 5x5.

Jacques Rogge created these Youth Olympics to promote an active lifestyle in the youth, but as was correctly pointed out in last week's Olympic Fever podcast, the only ones who get the spotlight are those who are basically training exclusively for these events already. And are kids watching? Do they even know it's going on? I'll admit I haven't checked Nickelodeon or the Disney Channel, but I don't think they've been mentioning these games. If you've seen promotions on those kid channels, please let me know!

It's an admirable idea, but it probably would be better served in different locations that would include more kids, instead of just making it Olympics-lite. It seems more ideal to continue their "Olympic Day" activities or create school programs that can be implemented worldwide instead of dumping millions of dollars into something that very few people know is going on.

I see this alternate reality, and I think there's got to be a better way. What do you think?

I finished my Tokyo Volunteer application! Now I have a profile and they will let me know the next steps in the process. I heard last week they'd already received 30,000 applications, so I'm now in the next ten or twenty thousand or so.

I made sure to plug as many things as possible; I have helped out with sporting events in the past. I taught English in China. I am actively involved in running and other sporting activities. I have an Olympics blog!

I would love for this to be a springboard into future volunteer efforts (LA2028, anyone?). And this might be a good way to introduce myself into the Olympics in person, as opposed to cornering myself into a spectator package or something. We'll see - I'll keep you posted! 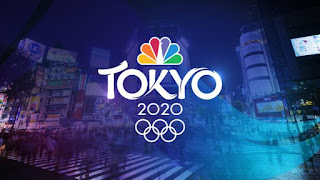 Not really. In an alternate reality - yes!