Overstimulated at the B1G Championships 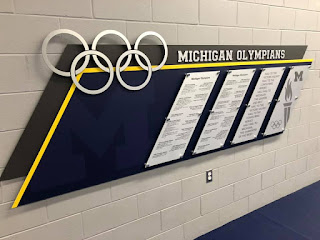 And then I happened to come back to visit my parents, placing me near Ann Arbor, where Michigan was hosting the B1G Indoor Track and Field Championships.

How could I miss that?

When the last group of tickets opened up on Tuesday, I took the chance and snatched up a ticket. An hour later, the final tickets had sold for the weekend, so I'm glad I didn't hesitate! 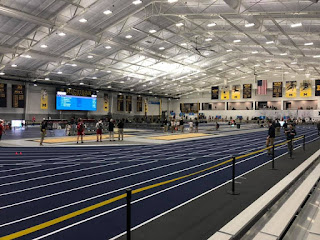 In 2018 the University of Michigan introduced a brand-new track and field (and lacrosse) facility a few miles south of the main campus. There was a new outdoor track with all the necessary field space as well as a new indoor building. And what a building it is!

Now Michigan is one of only seven universities in the nation that has a 200-meter banked hydraulic-lift track. I didn't know what this meant until I got there. It's hard to see the embankment when watching athletics on television, but it is blatantly obvious to see that the outside lanes are up about 4-5 feet higher than the inside. But it isn't always that way; unlike most classic indoor facilities, this embankment can lift up and lower. Because of this, the straightaway doesn't have to be in the middle of the track - it is on the side, just like it is for the outdoor races! This provides much more space for field events to take place without interfering with track events.

Here's a quick time-lapse to show you what I mean:

They even have a warmup track that completely surrounds the indoor track, providing a great place for warmups. That means that spectators and athletes are right next to each other. I guess I am a bit used to high-profile sporting events, because I was not used to walking right into the arena and having a bunch of track and field athletes passing right by me! Finished with your event? Go sit in the stands with your parents! Got your medal? Sit in the stands and cheer on your teammates!

There were some temporary risers set up around the track so that schools could sit together and support the athletes - these were mostly because the meet was sold out and you could tell Michigan was trying to keep the main stands from getting too crowded. (It never was too crowded; people were going in and out the whole time.)

I got there right at the beginning of the second day of events. Watching athletics live is awesome; instead of the television network picking what you're going to watch, you get to pick. And if you wanted to watch everything - go right ahead! There was one point where I watched a triple jumper, drifted my eyes to a shot putter, looked over at the pole vault, and then scanned the track. All in about five seconds. 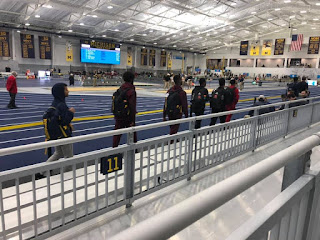 Everyone looks faster in person. I think, unlike swimming, the television cameras do a disservice to runners. It makes them look slower. And I know, you're thinking that they look plenty fast on television. You'd be right. It just means they actually are really fast. Go on the highway and drive next to a car going 70 mph. Then get out of the car on the side of the highway and watch cars pass you at 70 mph. It just feels way faster!

Two field events are even more amazing to watch in person: shot put and pole vault. Watching them in person makes you realize how far the shot is put (and leaves the athletes' hands almost effortlessly) and how the vaulters defy gravity. I could feel my eyes widen with delight watching the graceful arc of a heavy shot gliding through the air. 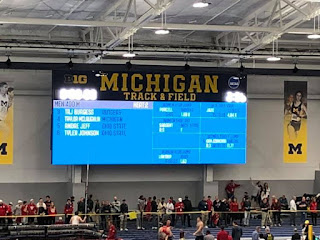 Following all the different events could be difficult without a running commentary, so Michigan built a very nice scoreboard to show off the results. Against a blue background, the black was hard to see. White was better.

This was different than a normal meet, because it was the conference championship. All the best of the Big Ten were there. That meant a few future Olympians, and a few athletes who were already posting top-ten-in-the-world times, distances, and heights.

I'm sure it would have been easier to follow the events if I knew more of the athletes; right now I am not too familiar with many of the collegiate athletes (other than Mondo Duplantis, but he is kind of an anomaly). If I were to attend, say, a USATF championships in the future (cross your fingers!) I'm sure I'd be more connected to a certain event because I am familiar with who is competing. 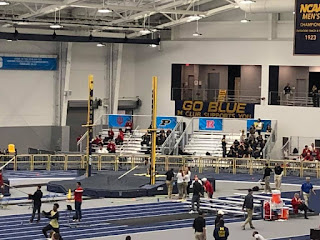 I adore athletics already, so the time flew by as I observed the events. For some it might get tedious. I do have to say it was wonderful to watch an indoor meet. Unlike the wide 400m track and the field events spread about the area, the building encloses everything and the 200m track is easy to follow the runners around the entire track.

In all honesty I didn't even realize indoor track and field existed until about eight years ago. But now it is a lovely way for an athletics freak to get through the winter!

Now I could wax on about track and field, but that is for another blog closer to Tokyo. But for now, I'll just say that I'm so glad I took advantage of a cheap ticket and saw some amazing athletes compete live and in person!